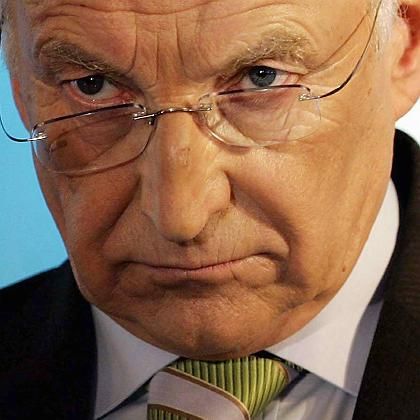 Bavarian Governor Edmund Stoiber has his work cut out for himself if he wants to keep his job.

One can be forgiven for confusing the two. On the one side of the royal gardens in the heart of Munich rises the Residenz, the former seat of Bavaria's long-ruling royal family. It was from here that crazy King Ludwig II and his ancestors ruled the kingdom with little opposition for the better part of six centuries.

On the other sits the Bavarian state capital building -- its façade almost as long and impressive as that of the palace. And inside, Bavarian Governor Edmund Stoiber has been doing a creditable imitation of his forbears: He has been at the helm of the southern German state for over 13 years and has recently indicated that he'd like to carry on until 2013.

Ask anyone else in Germany at the moment, though, and you're likely to get a different assessment of Stoiber's future. A political revolt is brewing within the conservative Christian Social Union (CSU), the political party which has ruled Bavaria virtually unchallenged since 1946. As soon as the end of the day Monday, Stoiber -- who almost defeated ex-chancellor Gerhard Schröder in the 2002 national elections -- may be asked to set aside his crown. And should he fall, the shock waves could reach as far as Berlin. Chancellor Merkel's power, after all, rests in no small part on her party's close alliance with the CSU.

For those not paying attention, the leadership crisis in Bavaria seems to have come out of nowhere. In late autumn, a local bantam-weight named Gabriele Pauli began wondering aloud if Stoiber should be the party's candidate in state elections in 2008. She even started up a Web site where party members and voters alike could discuss the merits of Stoiber continuing as governor or not. Still, had Stoiber ignored her, it's hard to imagine her mini-offensive would have come to much.

But he didn't. Instead, a number of party members received phone calls just before Christmas urging them to bring Pauli into line. Even worse, Stoiber's chief of staff Michael Höhenberger went digging into Pauli's past looking for dirt; he called up an acquaintance of her's to ask about her alcohol consumption and other aspects of her private life. Even though Höhenberger took the fall once the "spy scandal" went public, it didn't take long for fingers to be pointed directly at Stoiber.

Nor did it take long for it to become obvious that doubts about Stoiber's leadership were much more widespread than first thought. Pauli was able to find a number of allies willing to support her criticisms of the party leadership and more and more CSU functionaries began calling for Stoiber's head.

Now, his poll ratings are plummeting; according to a Sunday poll, only 45 percent of Bavarians would vote for the CSU these days -- way down from the absolute majority the party is used to. Even more dramatic, when Bavarian voters are asked specifically about Stoiber, 69 percent of them say they'd like to see him go, according to a weekend survey conducted by Forsa. And the party itself seems disinclined to catch him on his way down. "I don't see any way to reverse the situation," a leading party member told the Munich-based paper Süddeutsche Zeitung over the weekend. Indeed, on Monday, the party leadership is gathered in Bavaria and the subject of Stoiber's future is tops on the agenda.

Stoiber himself, who inherited the party soon after his larger-than-life mentor Franz Josef Strauss died in 1988, has done little to dampen the flames of dissent. Considered indispensable for so long, it seems he is having difficulty believing that his flock is turning on him. He even went so far last week -- when many in the party were, pro forma, pledging their allegiance to him -- of saying he wanted to run again in 2008 and remain in office another five years. And on Monday, Stoiber seemed in the mood for a fight. "I am fighting for my aims, for the success of Bavaria and the success of the CSU," he told reporters on Monday before going into a closed-door session.

So far, the reverberations from Bavaria -- one of Germany's strongest economic regions -- haven't yet reached Berlin. But Chancellor Merkel is concerned. After all, should the sister party in Bavaria weaken, Merkel's Christian Democrats would lose an important pillar propping up their power base. Even as Berlin publicly ignores the power politics down south, concern is growing. As one CDU member told the Süddeutsche Zeitung, "If the CSU in Bavaria doesn't hit the 50 percent mark, Merkel won't be able to stay in the chancellery." 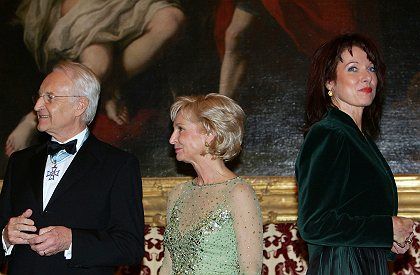 Gabriele Pauli set off the decline of Edmund Stoiber.

The only person surprised by Stoiber's rapid descent may be Stoiber himself. He lost a lot of steam with his unexpected, last-minute federal-election loss to Schröder in 2002 and his image was further tarnished during the long power struggle with Angela Merkel which followed. Finally, just after Merkel's victory in the 2005 election, Stoiber unexpectedly declined the position of economy minister and chose to stay in Munich -- after having told the country he was moving up to Berlin. After that, the Bavarian's eventual demise seemed just a matter of time.

Now, that time seems to have come. Even as Stoiber looks around for friends to support him, those who have been at his side the longest are beginning to position themselves for the coming power struggle -- a struggle which could include Germany's Minister of Agriculture Horst Seehofer, a long-time CSU leader, and Minister of Economics Michael Glos.

And what has become of the woman who shoved Stoiber on his way down? Pauli feels herself vindicated. "Stoiber's time as head of the party and as governor has come and gone," she told the Süddeutsche Zeitung on the weekend. "A majority in the CSU  sees it that way. And we must react as soon as possible."