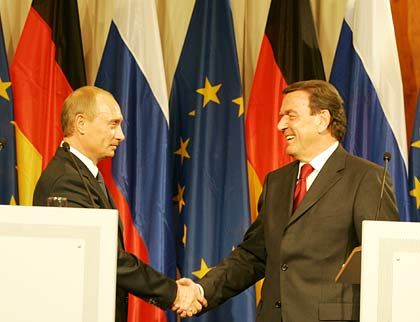 Vladmir Putin and Gerhard Schröder announce the deal on the Baltic Sea gas pipeline on Sept. 8.

Gerhard Schröder may no longer have the lead role on Germany's political stage, but it didn't take long for the ex-chancellor to once again ruffle feathers in Berlin. On Friday, Schröder confirmed he would head an advisory committee of a massive undersea Russian-German gas project, sparking a storm of protest about a potential conflict of interest.

Schröder, along with his old chum Russian President Vladimir Putin, signed off on the €4-billion gas pipeline less than a fortnight before he lost Germany's general election in September. Now only weeks after leaving office he has agreed to take a plum job in a project headed by partially state-owned Russian energy giant Gazprom. Not surprisingly, the move has eyebrows raised across Germany.

Regardless of his true intentions, Schröder should know better. His decision to head the advisory board of the North European Gas Pipeline (NEGP) appears as if he is being rewarded for pushing through the politically sensitive project that will stretch from western Siberia to Germany's Baltic Sea coast. Although not yet official, Schröder will reportedly earn €1 million a year from the consortium that belongs 51 percent to Gazprom. The remaining 49 percent is controlled by German energy firm Eon and a subsidiary of BASF.

The deal is set to help secure Germany's strategic energy needs from 2010, but it has annoyed both Poland and Ukraine since the pipeline's sea route will bypass both of those Kremlin-critical countries -- denying them transit fees and potentially exposing them to greater Russian pressure over energy supplies.

Criticism on all fronts

Withering criticism over Schröder's new position has come from across the political spectrum in Berlin. Reinhard Bütikofer, the head of his former coalition partner the Greens, couldn't have put it any clearer. "It stinks," he said. Christian Wulff, the conservative governor of the state of Lower Saxony said Schröder would soil Germany's image if he took the job. "If Schröder ... joins the advisory board, he'll have to publish how much he's being compensated," Wulff told the tabloid Bild.

The former chancellor has even come under fire from within his own Social Democratic Party (SPD), as voices grow for new ethics rules for retiring politicians. "I wouldn't have done it," Wolfgang Thierse, Social Democratic vice president of the parliament, told German ARD television. Similar words were used by former defense minister Peter Struck on Sunday evening. The SPD leader in the state of Thuringia, Christoph Matschie, told reporters in Berlin that Schröder was even risking his reputation over the matter. "Schröder gained a high standing as chancellor. My impression is that he's endangering his name," he said.

But while in office, Schröder also gained a reputation for putting business interests ahead of other considerations while dealing with Russia. During his seven years as chancellor, Schröder developed a close political and personal friendship with Putin, who speaks fluent German from his time as KGB spy in East Germany. Schröder was frequently criticized for seemingly downplaying concerns about Moscow's heavy-handed tactics in strife-torn Chechnya and the Kremlin's growing authoritarian tendencies elsewhere in Russia. 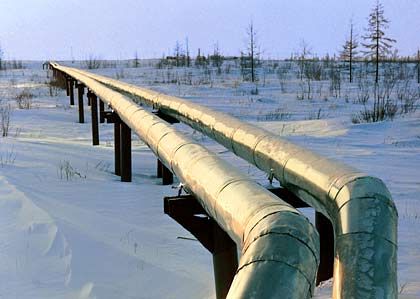 Russia already supplies the bulk of Germany's natural gas. Construction on the new pipeline got underway on Friday with completion scheduled for 2010.

If he does now take the pipeline job, it will look like he hasn't only tolerated such things, but that he's also profited from his cozy relationship with Putin. Especially due to the regionally sensitive nature of the project, it appears as if Schröder's personal interests have trumped geo-political ones.

To make matters worse, another long-time Putin friend has been appointed as the NEGP project's chief executive. Matthias Warnig, a former member of the East German secret police the Stasi, reportedly met Putin while he was working for the KGB.

Even giving Schröder the benefit of doubt, there is no way to separate his new job from the fact that he played a key role in initiating the project just before leaving office. It might be how business is done in much of Russia, but even the hint of such shady dealings should make the whole affair untouchable for a former German chancellor.