One can be forgiven this German autumn for thinking the day would never come. On Tuesday, Chancellor Gerhard Schröder and his cabinet made his way across town to President Horst Köhler's office for one of his last visits as chancellor. After a short, subdued ceremony, the team headed back to work -- as "acting chancellor" and "acting cabinet." Following protocol, Köhler released Schröder and Co. from their offices -- and then asked them to continue on until the next government is ready to take over. After all, over one month after the Sept. 18 elections, Germany still doesn't have a new government.

But for those concerned about the country's lack of political clarity, there is now a light at the end of the tunnel. Not only is it clear that Christian Democrat Union (CDU) party leader Angela Merkel will become the country's next chancellor, but her cabinet is also more or less set in stone. All that's left is for Merkel to finish coalition negotiations with the Social Democrats (SPD) -- which is expected to happen by the middle of November -- and Germany can get back to business as usual.

But for Merkel, it is unclear whether such a prospect is indeed the proverbial light -- or an oncoming train. Nobody on Merkel's side of the grand coalition table seems terribly pleased with the clutch of cabinet seats she managed to secure in tough negotiations with the SPD, and many of them have been unwilling to shut up about it. Merkel, they say, gave away all of the important seats to her political opponents. Merkel, they say, has given up on her campaign promises of implementing real reform. Merkel, they say, will not have enough power to fulfill her constitutionally guaranteed mandate of providing the government direction.

Many are likely underestimating her. After all, at one time or another in the last decade, all those inner-party critics now picking away at Merkel's power base were passed up as she quickly climbed the ladder to the top. She has proven herself to be the political equivalent of a Weeble-Wobble -- shove it as hard as you like, and it will still remain standing. So many have predicted her demise so often that even small mistakes will likely become magnified as her political enemies and media commentators seek vindication. 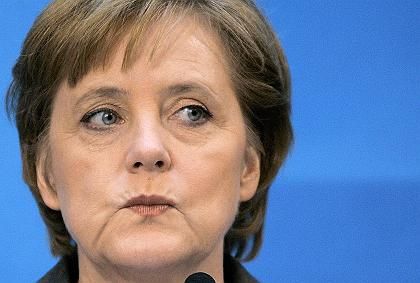 Angela Merkel has had a difficult road to the top, and it's not likely to get any easier.

Even without the fishbowl effect, she has her hands full with her new cabinet. Indeed, Merkel's role will be like that of  circus lion tamer -- she will shine by keeping the snarling predators at bay. But at the same time, she could get her head bit off if she flinches one bit.

First on the list of those who may be on the prowl for red meat is Edmund Stoiber, who heads the CDU's Bavarian sister party, the Christian Social Union (CSU). Merkel initially offered the Bavarian governor, once her strongest political rival, the post of finance minister. Not surprisingly, given that the post carries the baggage of a soaring national debt and unpopular cuts to the federal budget, the 64-year-old rejected the post. Instead, he laid claim on the Economics Ministry. The post will likely allow him to further his strategy of positioning himself as Germany's shadow chancellor. The wildly popular 12-year governor of Bavaria -- one of the few German states with a healthy economy and the only one which will end the year with a balanced budget. Stoiber has never really recovered from his loss in the 2002 general elections to Gerhard Schröder.

Stoiber begrudges Merkel her success while at the same time enjoying a certain amount of schadenfreude at her party's poor 35.2 percent showing on Sept. 18. His explanation for her election night flop? Merkel's campaign was too cold and Germany's social system was given short shrift. He has made it clear that he wants to change that -- meaning he could very well position himself against Merkel should she attempt to institute any meaningful reforms.

Stoiber is also expected to have a formidable political ally in Horst Seehofer, the 56-year-old slated to take over the Ministry of Consumer Protection, Food and Agriculture. Seehofer is famous for his efforts to torpedo Merkel's plans for reforming Germany's healthcare system in recent years. She sought to prevent his entry into her cabinet, but pressure from Stoiber helped secure him a post. Will he repay it with full political loyalty to Stoiber?

The defense ministry is also to be led by a potential Merkel antagonist. France Josef Jung, a long-time friend of Hesse Governor Roland Koch, one of Merkel's greatest inner-party political adversaries, is nothing if not politically loyal to his party friend. When a campaign finance scandal broke in the state, Jung vacated his post so Koch didn't have to. And Koch, it should be remembered, feels much as Stoiber does that Merkel has taken a position that is rightfully his own. In that sense, Jung is seen by some as Koch's agent in the cabinet and could just be waiting for the right moment to fatally weaken Merkel. 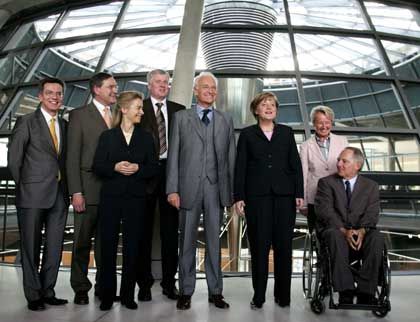 Neither is Merkel likely to get any cuddling or warmth from incoming Interior Minister Wolfgang Schäuble. The 63-year-old was part of Merkel's campaign team as an expert for security and foreign policy -- and this will mark his second stint in the interior ministry, which he led before under former Chancellor Helmut Kohl. Wheelchair-bound since an assassination attempt during a campaign appearance in 1990, Schäuble temporarily followed Kohl into the party doghouse after a late-'90s campaign finance slush fund scandal rocked the Christian Democrats and paved the way for Merkel's rise. It was, in other words, Schäuble who passed Merkel on his way down rather than Merkel passing Schäuble on her way up -- and that has made for a not-always-smooth relationship between the two.

And those are just the potential pitfalls from within the CDU and CSU. The SPD, even as the party pledges to work with Merkel in forming a productive -- if unwieldy -- government, is not about to prop up the chancellor should she falter. Heading up the SPD faction is party boss Franz Müntefering. Having spent the last month doing his best to keep Merkel out of the chancellery, he is now taking over the labor ministry and the position of vice chancellor. Despite having been in the political ring his entire life, Müntefering is still something of a blank slate. Extremely loyal to Schröder, he was loyal to former SPD head (and now Left Party head) Oskar Lafontaine before that. Now alone at the top, he is something of a wildcard. And his decision to accept the labor ministry post is also seen as a political gamble. If rampant unemployment continue to rise, he will be the first in the line of fire. Should it drop, however, look for him to take credit for the reforms introduced under Gerhard Schröder.

Merkel's cabinet is also graced with yet another close ally of outgoing chancellor Schröder. Franz-Walter Steinmeier, 49, is set to be Germany's next foreign minister. Formerly Schröder's chief of staff, Steinmeier's posting is considered to be the largest surprise in Merkel's cabinet. And he is largely seen as someone who would like to carry on the foreign policy of the previous administration -- namely, distance to the United States and close relations with Russia. These are, however, both areas in which Merkel has said she wants to reposition Germany. Although Steinmeier is not known for his brilliant English ability, he has experience on the international stage. He participated in diplomatic negotiations with both Moscow and Israel as well as settling on compensation payments with Libya for victims of the 1986 terrorist bombing of the LaBelle disco in Berlin.

The rest of the SPD team is filled out by Brigitte Zypries, 51, who will carry on as justice minister, Peer Steinbruck, 58, the new finance minister and Ulla Schmidt, 56, who will continue as health minister. Forty-five-year-old Sigmar Gabriel has also been tapped for the environment ministry, Heidemarie Wieczorek-Zeul, 62, will stay in her development ministry post and Wolfgang Tiefensee, 50, will become Germany's new transport minister. 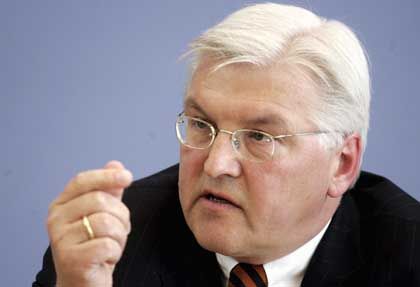 Merkel has managed to place a few allies on the cabinet: Research Minster Annette Schavan, 50, is considered Merkel's closest ally in the CDU leadership and Family Minister Ursula von der Leyen, 46, is likewise a political friend. Thomas de Maiziere, 51, who will take over as Merkel's chief of staff -- a cabinet position in Germany -- is part of Merkel's inner circle. Still, in a cabinet of 16, she has managed to insert just three political allies, a development that underscores her political weakness.

All of which means that the tightrope Merkel now has to walk is an especially thin one. Having sought to position herself as a great reformer, she is now in the position of keeping a cabinet full of political heavy hitters in line while at the same time trying to squeeze a few political successes out of them. For most of her cabinet -- even many of those from her own camp -- a successful Merkel is the last thing they want to see.