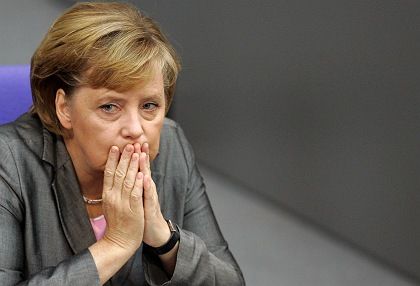 German Chancellor Angela Merkel's popularity has waned along with that of her party.

The devil, it is said, finds work for idle hands. And with the German Bundestag in recess this month -- and a number of politicians taking a bit of time off -- the devil seems to have a busy schedule in Berlin these days. The result has been a minor implosion within Chancellor Angela Merkel's party the Christian Democratic Union (CDU).

The roots of the problem can be found in the plummeting public support for the Merkel-led government and, more troubling, for Merkel's party. An August 2 survey found that only 31 percent of German voters would have placed an X next to the CDU had elections been held last Sunday. The result puts the CDU only two percentage points ahead of its coalition partners the Social Democrats (SPD). And the survey result is four percentage points lower than the CDU -- combined with its Bavarian sister party the Christian Social Union or CSU -- received in last autumn's election.

A more stoic political party could perhaps ignore such public opinion vagaries. Particularly given that Germany is currently suffering from a post-World Cup, post-heat wave hangover. The current nationwide disgust with all things political feels a bit like a breakfast table spat following an epic night out.

These days, however, the CDU has proven itself to be anything but stoic. The party seems increasingly uncomfortable with Merkel's perceived tendency to back off whenever a fight seems to brew with her coalition partners in the SPD. CDU members are unhappy with Merkel's decision to raise Germany's value-added tax by three points instead of introducing a major tax reform as she had promised.

Her ditching of tax breaks for those buying their own homes likewise rankled. And to top it off, a health-care reform passed about the same time the German team got ousted from the World Cup in early July has not been well-received. Instead of de-coupling health-care costs from employee salaries, the new plan may actually put more pressure on already high non-wage labor costs.

Mostly, though, the CDU is nervous that voters seem to be fleeing the party just as autumn elections in the states of Berlin and Mecklenburg-Western Pomerania are looming.

So, almost as soon as Merkel was safely out of the country for a couple of weeks of hiking through the Dolomites in northern Italy, Jürgen Rüttgers, the governor of North-Rhine Westphalia -- Germany's most-populous state -- decided it was time for a bit of constructive criticism.

In an interview with the weekly news magazine Stern, Rüttgers -- a powerful member of the CDU's left wing -- said the CDU "is no capitalist party. It was never one, is not now one, and cannot be allowed to become one." He was just warming up. Later in the interview, he said that it was time to say goodbye to a few basic misconceptions. What did he mean? "The claim that tax cuts lead to more investment and thus to more jobs is, in this simple formulation, incorrect."

Had there been much of anything going on in Berlin these days, such a departure from the party line by a CDU bigwig would likely have gone unnoticed. But for an antsy CDU unused to falling survey numbers, the gentle critique served as a green light to unload months of pent-up frustration. And it marked the definitive end of the moratorium on politically pummelling Angela Merkel.

Almost before the ink was dry on the Rüttgers interview, Jörg Schönbohm -- head CDU honcho in the eastern German state of Brandenburg and not one of Merkel's most dedicated supporters -- likewise laid into the chancellor. "Many CDU voters are disappointed about the political direction" of the party, he told the Sunday version of Bild Zeitung two days ago. "It is clearly not apparent to people whether the party follows a particular course."

What gives, Merkel must be asking herself? After all, as she pointed out in a July SPIEGEL interview, the German budget conforms to constitutional guidelines for the first time in six years, non-wage labor costs have actually gone down slightly on her watch and unemployment seems to be dropping.

One answer may be the discomfort many in the CDU have long felt with Angela Merkel's leadership. During the post-election honeymoon when Merkel's triumphant tour through world capitals resulted in sky-high approval ratings for the chancellor, one had the impression that many in the party were merely biding their time until she stumbled. 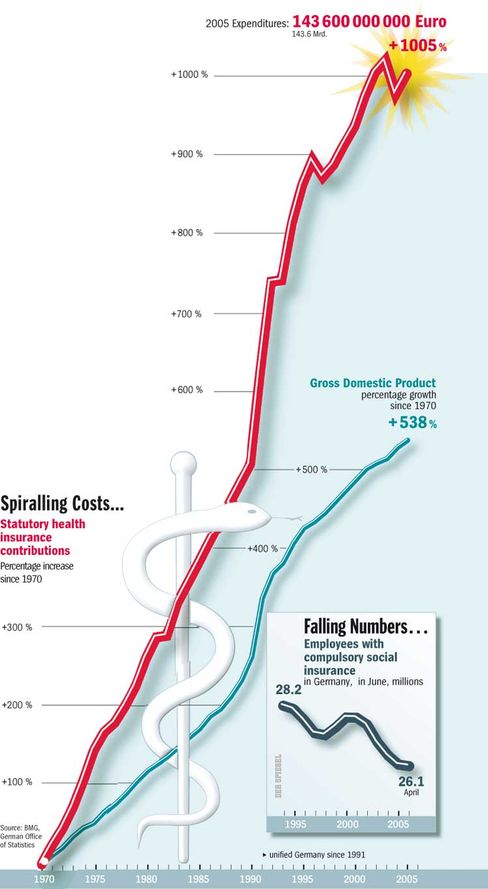 It seems more likely, though, that the party base is uncomfortable with Merkel's apparent left turn. During the campaign, tax reform -- and even a flat tax -- was energetically discussed. When Merkel eked out a victory with just 35.2 percent of the vote, many within and outside the CDU hammered Merkel for running a campaign that presented the CDU as being uncaring and aloof. While the CDU got the most votes of any party, more than 50 percent of Germans voted for the left side of the political spectrum in the September poll.

Given the mounting critique, though, Merkel -- now back from northern Italy -- has said she would like to meet with Rüttgers this week to iron out their differences. And her most-trusted aide -- and general secretary of the CDU -- Ronald Pofalla has said that "we will have to continue to work on defining the profile of the CDU as part of the governing coalition."

Pofalla himself, though, has come under a fair amount of opprobrium for speaking softly and carrying a decidedly small twig when it comes to criticizing the SPD's stance on issues -- traditionally the general secretary's job.

This week, though, it seems as though Pofalla has turned over a new leaf. His solution to rising welfare costs? Why not require people to take over financial responsibility for their unemployed parents?

The idea might need a bit of work. The devil, they say, is in the details.