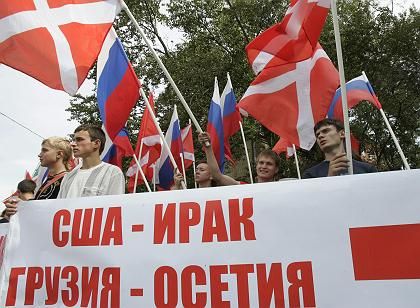 Members of the Kremlin-loyal youth organisation "Nashi" wave flags and hold a banner during a protest in front of the US embassy in Moscow during the Georgia war.

I never thought Id see the day when regular Russians, without any prompting, would voluntarily and passionately defend the actions of the Kremlin in conversations with a foreign friend.

But at a garden party in a Moscow suburb one evening at the height of Russias flash war with Georgia in August, I was accosted by several old friends who were bursting to explain to me why Moscow had no choice but to send the 58th Army into Georgia, that it in no way constituted aggression, and that Russia was clearly acting according to humanitarian concerns.

Why do you [Westerners] always paint Russia black, even when were just trying to save our own citizens from genocide?, Sasha, a professor of political science asked me. Weve been facing a creeping invasion of our country by NATO for years, but thank God our leaders are finally taking action to stop it, said Andrei, an executive with a big Western-based multinational corporation. I was astounded. I personally believe that Russia had a half-way decent case for its actions, and Ive argued as much in print. But Id never before heard, or ever expected to hear, any of my friends -- a fairly broad spectrum of intellectuals, businesspeople, a couple of diplomats -- sounding like a news broadcast on Russian state TV. Nowadays, virtually all of them do. These are people who, in the past like most educated Russians, would automatically assume that a Kremlin official was lying if his lips were moving. Things have definitely changed.

My friends are mostly members of the former Soviet educated elite, not average Russians. But opinion polls suggest their views are in sync with the majority of Russians. As the war was raging in mid-August, a survey published in the daily Izestia showed that fully 78 percent of Russians approved of their militarys first foray outside its borders since the Soviet Union invaded Afghanistan in 1979. The Kremlins two wars in the past decade-and-a-half to put down separatist Chechnya, on Russias own sovereign territory, never garnered majority support. In another poll, published after the recent conflict ended, 40 percent of Russians said that President Dmitri Medvedevs decisions closely reflected their view of the problem while an additional 34 percent said they had expected even tougher action against Georgia.

Russias national psyche has turned around, and its not just the well-known tonic that a small, victorious war can often deliver. This change has been evolving for years, ever since Vladimir Putin came to power and began restoring central power and order in a country devastated by a decade of economic implosion and social collapse. Russias nine-year-old economic boom, fuelled by oil and gas exports, has silently transformed the entire social landscape.

Sasha, the political scientist who used to be as pro-American as he is now a patriotic Russian, spent the 1990s living in a two-room city flat and surviving on a salary of less than $100 per month. In those days, an academic was not just a pauper but also a social nobody. Being a biznesmen was the epitome of 1990s success in Russia, and I can recall Sasha angrily bemoaning the spectacle of some uneducated clod who sells vegetables in the marketplace earning more than he did. But since Putin arrived in the Kremlin, salaries and status for academics have risen dramatically. Sasha now earns almost $1,000 per month, not a bad income in Moscow, and picks up substantial consulting fees in sideline work for a big, pro-Kremlin political party. Hes transforming his former ramshackle wooden dacha in a village outside Moscow into a two-storey brick suburban home. It no longer feels humiliating to be a Russian.

Andreis case is even more dramatic. A former diplomat, he spent much of the 1990s trying his hand at various unsuccessful business ventures. Any conversation with him in those days usually involved a litany of complaints about corrupt officials, rapacious gangsters, and the incompetence of what he saw as an oligarch-run Kremlin. But since landing a good job with the Russian branch of a big global corporation about five years ago, Andreis bought himself a new Moscow luxury flat, sent his daughter to study in England and travels frequently to Europe for business and vacations.

What increasingly angers both Sasha and Andrei is that their newfound pride does not seem to be reflected in the West, where Russia appears to get less respect than ever. Whereas a decade ago neither man thought much about NATO expansion into the former Soviet sphere, or even the American-led military interventions to restore order to the former Yugoslavia, both now take each new perceived foreign policy slight against Russia very personally. Andrei recently treated me to a lecture about how the precedent set by Western recognition of Kosovos independence will lead to a chain reaction in the former Soviet Union, leading to Moscows unilateral recognition of breakaway statelets like Abkhazia and South Ossetia in Georgia, and perhaps even the Russian-populated Crimea in Ukraine.

Sasha scoffs at the prospect of Russia being kicked out of the G-8 or other threats to isolate Russia. Who cares what the Americans think anymore, he says. They invaded Iraq and totally destroyed that country, and now they criticize us for a very limited humanitarian intervention in Georgia. Who needs the approval of hypocrites? Thats a new attitude; I can recall Sasha being filled with hope when Russia was admitted to the G-8 a decade ago, that his country was at last on the road to becoming a normal place.

Mikhail Gorbachev, the last Soviet leader and the man who initiated his countrys historic opening to the West, voiced similar outrage in a recent New York Times article. For some time now, Russians have been wondering: If our opinion counts for nothing in those [Western] institutions, do we really need them?, he wrote. Just to sit at the nicely set dinner table and listen to lectures? Indeed, Russia has long been told to simply accept the facts. Heres the independence of Kosovo for you. Heres the abrogation of the Antiballistic Missile Treaty, and the American decision to place missile defenses in neighboring countries. Heres the unending expansion of NATO. All of these moves have been set against the backdrop of sweet talk about partnership. Why would anyone put up with such a charade?

This is where the prickly new pride that Russians are displaying becomes worrisome, even dangerous. If all the former rules of global order, such as respect for a nations territorial integrity, have gone out the window we can expect a lot of trouble in the former Soviet Union. My friends may have a point when they allege that the West in general and the United States in particular bear a lot of blame for devaluing those rules in Iraq and Kosovo, but that doesnt strike me as a good reason to support the dismemberment of Georgia.

I recently had a long conversation with Alexander Dugin, head of the International Eurasian Movement, a Russian extreme nationalist group. Dugin, who often appears as a commentator on Russian state TV, unabashedly supports a sweeping redivision of territory in the former USSR, to restore to Russia territories such as the Crimea in Ukraine and Transdniestria in Moldova. Russia has grown much stronger and is in a position to revisit the status quo in the post-Soviet space, says Dugin. Russia understands that we cannot allow Ukraine to enter NATO as a whole state. We will witness a wave of separatism in Crimea and eastern Ukraine. Russia is no longer weak and at the Wests mercy; its on its way to recreating itself as an imperial power.

Thats a formula for international mayhem on a grand scale. And what really scares me is that so many of my own friends are starting to sound just like Dugin.