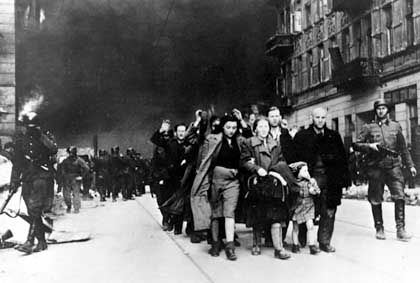 Warsaw was destroyed by German troops in World War II. The city's reconstructed historic center has become a symbol for Poland's survival.

The bulk of the exodus began soon after the guns of World War II went quiet as millions of Germans suddenly found their homes were now on the wrong side of the border. They were forced to abandon houses and property and trudge across the newly created frontier into Allied-occupied Germany. They came from regions as far away as present-day Kaliningrad and Lithuania, but mostly from areas now belonging to Poland and the Czech Republic -- areas where Germans had lived for centuries.

The hardships were immense. Many fell ill or died on the way -- virtually all of them lost most of what they owned. And they arrived in a destroyed Germany beset by all manner of shortages, including housing. Many of the expellees were housed at newly-empty concentration camps, where some expellees remained, for example in Dauchau, until a whole decade later. It became a hidden tragedy in post-World War II Central Europe.

That, at least, is one side of the story. The other is slightly better known. The Nazis invaded Central European countries, killed millions and left a scorched earth in their wake. With new borders drawn in 1945, Germans were suddenly unwelcome in countries across the region. By invading their neighbors, Germans had forfeited their rights. Fair is fair.

But what may at first seem little more than an academic debate is actually the stuff of present-day diplomacy. For years, the idea of constructing a Center Against Expulsion to commemorate the post-war forced migration has been kicked around at high levels of the German government. The Czechs and Poles, for their part, find such an idea odious -- they are suspicious of anything which might add their aggressors to the rolls of World War II victims.

And now, Germany and Poland may soon find themselves on a collision course over precisely this issue. Poland has recently elected Lech Kaczynski  -- a man who did not shy away from anti-German proclamations during his campaign -- as president. And in Germany, the word from ongoing coalition negotiations, between the Christian Democrats under chancellor-in-waiting Angela Merkel and the Social Democrats, is that the two parties have reached a preliminary agreement on establishing a "visible symbol" dedicated to the memory of the expulsions to be located in the German capital.

"We should become prepared for a period of uneasy coexistence, which alternates between mistrust and cooperation," Kai-Olaf Lang, an expert on Poland with the German Institute for International and Security Affairs told United Press International recently referring specifically to Kaczynski's election. "Because of the countries' common goal for Polish accession to the European Union, historic and traditional political conflicts were set aside." But since Poland's accession in May 2004, "that common goal is gone."

While the preliminary coalition agreement -- a product of the coalition committee dedicated to cultural issues -- does not specifically mention a Center Against Expulsion, any mention of expellees could raise fears in Poland that such a center is in the works. For many, particularly for the tabloid press, the idea has become something of an anti-German rallying cry. And, as with all such campaigns, this one has also found a face: the vocal president of the Federation of Expellees -- herself an expellee from near the city of Gdansk in northern Poland and a Christian Democrat parliamentarian -- Erika Steinbach.

"The idea of a center is very suspect for Poles," says Piotr Buras, a Polish expert on German-Polish relations and co-author -- with Henning Tewes -- of a new book on Poland's road to the European Union. "The Germans need to understand that there is a large problem in German-Polish relations and she is called Steinbach. If the Germans don't see that, then it is a clear sign that they aren't all that interested in good relations with their neighbor." 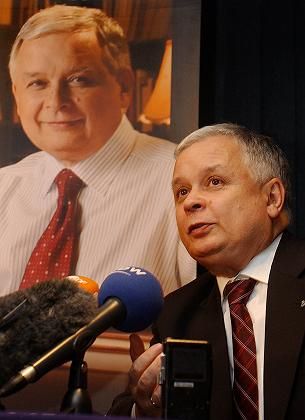 The election of patriotic Lech Kaczynski as president may not make German-Polish relations any easier.

Of primary concern to the Poles is the possibility that a center built by Steinbach -- a woman many find unnecessarily provocative -- would end up being one-sided and present Germans as victims. Indeed, the country remains very sensitive about its World War II past. Over 5 million Poles were killed by the Germans during the war and its beautiful capital was reduced to rubble. The carefully rebuilt historical core of Warsaw is today revered as a powerful symbol of Poland's rebirth.

Poland's president-elect Kaczynski -- and mayor of Warsaw since 2002 -- tapped into this historical resentment during his campaign. He has vocally opposed Steinbach's proposed Center Against Expulsion and recently told the German tabloid Bild that "it would be best for German-Polish relations if the center were never built." During his campaign, he also compared a planned gas pipeline from Russia to Germany through the Baltic Sea as a second "Hitler-Stalin Pact" -- a reference to the non-aggression pact signed by Nazi Germany with the Soviet Union which cleared the way for the Nazi invasion of Poland.

"It couldn't get any worse"

"The new Polish government really wants to emphasize historical politics," says Buras. "Lech Kaczynski is a difficult partner for Germany primarily because of his politicization of history and the conflicts between the two versions of history."

The Germans, for their part, have been providing mixed signals. Steinbach herself has proven adept at getting into headlines with her demand for a center -- but in so doing has stepped on a number of Polish toes. Referring to Kaczynski's election in a recent interview with SPIEGEL ONLINE , she said Polish-German relations "couldn't get any worse." 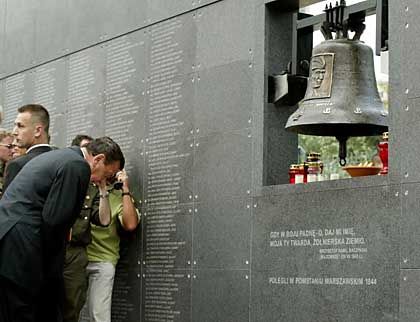 A number of German politicians have sought to reassure Poland. Here outgoing Chancellor Schröder bows in front of a memorial wall in Warsaw.

Gerhard Schröder's SPD-led government was consistently opposed to the construction of a center and has likewise distanced itself from the Prussian Claims Society -- a group of German expellees and their descendents who are seeking compensation for land lost as a result of the post-war expulsions. Incoming German chancellor Angela Merkel, though, while likewise rejecting any compensation claims by Germans, leads a CDU party which contains many vocal members in favor of a Center Against Expulsion.

Indeed, says Buras, the wording in the preliminary coalition agreement referring to a "visible symbol" -- without specifically mentioning Steinbach's Center -- could indicate that a compromise has been reached between the SPD and the CDU. The Christian Democrats can point to the fact that the issue may become part of the coalition agreement whereas the SPD can point to the vague language. A "visible symbol," says Buras, could mean something as uncontroversial as setting up a permanent exhibit to the expulsions in a Berlin museum.

Either way, Poland will be closely watching how Merkel's coalition addresses the issue of the German expellees. She has promised to focus on improving relations with Poland after Schröder spent many years favoring a friendship with Russia. Exactly how her government ends up defining "visible symbol" could determine just how friendly she is able to get with Poland.