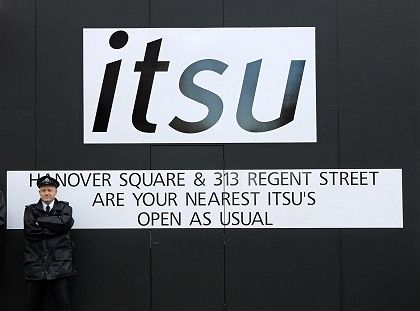 A policeman stands guard outside the sushi restaurant where Litvinenko is thought to have been poisoned.

The quest to find the murderer of former KGB spy Alexander Litvinenko is looking increasingly like the "Choose Your Own Adventure" books published in the 1980s. No matter which plot line you choose, you could be wrong.

The latest trail seems to lead directly back to Moscow. The British daily Guardian learned from unnamed "intelligence sources" on Friday that Litvinenko, who used to work for the KGB before turning tables and becoming involved in the investigation into the murder of anti-Kremlin journalist Ana Politkovskaya, may have been killed by "rogue elements" within the Russian state.

Although involvement by the government of Russian President Vladimir Putin has been ruled out, officials believe the perpetrators would have needed access to government nuclear facilities to obtain samples of polonium 210, the radioactive substance that was used to poison the former spy. "Only the state would have access to that material," one official told the Guardian.

But the San Francisco Chronicle isn't so sure. A Thursday report mentioned a licensed US vendor who sells trace amounts of the dangerous radioactive element on the Internet for $69 per sample and mails it through the US Postal Service or UPS. Comments made on Friday by Sergei Kiriyenko, the head of Russia's state energy agency Rosatom, seem to corroborate the fact that it is easier to obtain samples of polonium 210 than previously assumed. Kiriyenko told the government daily Rossiiskaya Gazeta that Russia produces 8 grams of the substance per month, and that "all this amount goes to US companies through a single authorized supplier, Tekhsnabexport company."

When ingested, inhaled or injected, it takes less than one gram of the silvery powder to cause a slow, painful and unstoppable death. Litvinenko's killers may have used polonium 210 in liquid form, officials said, since it would be easier to transport and less prone to poison others by mistake.

British media on Friday are also reporting that Italian security expert Mario Scaramella, who met with Litvinenko at a London sushi restaurant on the day the Russian fell ill, has tested positive for polonium 210. Scaramella said on Wednesday that doctors had cleared him, but reports have emerged that he has "significant" amounts of the poison in his system.

In a separate branch of the investigation, British police are focusing their current efforts on a group of five or more Russians who entered the UK via London Heathrow Airport, ostensibly to attend a Nov. 1 soccer match between CSKA Moscow and Arsenal at the Emirates Stadium. The group flew back to Moscow together on Nov. 3. Police are comparing their movements with those of the late Litvinenko in the hopes of finding the key to the murder mystery.

Among the group was Andrei Lugovoi, a former KGB colleague of Litvinenko's who flew from Moscow to London with his family and some friends on Oct. 31. The next day, he and another man, Dmitri Kovtun, met with Litvinenko at the Millenium Hotel on the day he fell ill. Kovtun entered the country on a Nov. 1 flight from Hamburg and is also part of the group currently under investigation.

Lugovoi, who so far has been described by the police only as a "witness," used to work as a bodyguard for former Russian Prime Minister Yegor Gaidar. The Irish government said on Thursday it was launching a separate investigation into an incident involving the former premier, who fell violently ill during a visit to Ireland last week. It is unclear whether the incident is linked to the Litvinenko case, but Gaidar's daughter Masha is convinced it was "a political poisoning." Gaidar is a moderate critic of the Kremlin whose free-trade reforms are to this day often blamed for a wave of poverty in 1990s Russia.

Towards the end of a speech he was giving last week at the University College in Maynooth, a town west of Dublin, Gaidar suddenly fainted and had to be rushed off to a nearby hospital. "There was blood coming from his nose; he was vomiting blood. This went on for more than half an hour," his daughter Masha described the scene. Spokesman Valery Natarov said that Gaidar had not had medical problems before the incident, and that "it was not a natural poisoning."

The investigation into the poisoning of Litvinenko is being headed by police anti-terrorism officers, with support from the MI5 and MI6 secret services, officials said. To date, British authorities have found a dozen contaminated sites in London, including the Millennium Hotel and the Itsu sushi restaurant where Litvinenko met several contacts prior to feeling ill.

A total of five passenger aircraft were also grounded on Tuesday and tested for radioactive traces, which were found in the seating area of two British Airways planes on routes between London and Moscow, as well as other European destinations such as Frankfurt, Barcelona and Athens. Two jets belonging to British Airways and the Russian Transaero have since been released for regular traffic after forensic teams determined that there is no health risk from the radiation, Reuters reported on Friday.

Doctors in full protective gear will perform an autopsy on Litvinenko's contaminated body at the Royal London Hospital on Friday. Investigators hope the examination will reveal how the radioactive poison was introduced into Litvinenko's system.