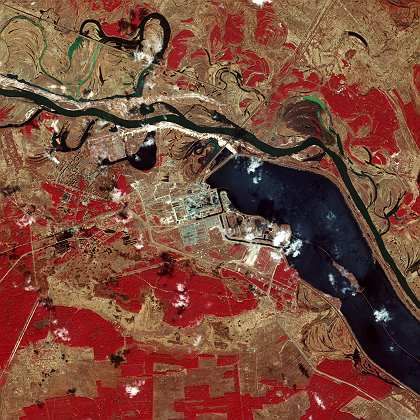 "Radioactivity? That's nonsense! I've lived here for twenty years and everything's clean," fumes Hanna Semenenko, shoving fresh wood into her iron stove. The 80-year-old lives in the village of Illintsi, in the middle of the officially-evacuated, 30-kilometer zone around the Chernobyl nuclear power plant.

She has the usual aches, pains and problems of old age, she says, but otherwise she's essentially fit. In early May, 1986, a few days after reactor no. 4 exploded about 15 kilometers away, she was forced to evacuate -- fleeing a cloud of deadly radiation -- with the other surviving villagers to a town outside Kiev. A year later she was back in Illintsi.

The old woman with matte green-gray eyes says she just didn't like the big city. "And where else should I go?" she wonders. At the time she was accompanied by her son, her daughter-in-law, and her granddaughter. The young family helped Hanna fix up her little house, then returned to Kiev, where they could live in their own apartment.

Since then, Semenenko's been alone. Once a month a deliveryman brings her a €60 pension; to supplement it she farms potatoes and vegetables. Hanna has built a massive wooden fence to protect her garden from wild boars -- a plague again since the evacuation despite the contamination. A neighbor who lives two collapsed houses away made a fence out of broken-up bed frames from other abandoned homesteads.

Illintsi once had a thousand inhabitants, but now it has only 36. The occupied houses have working electricity and one even has a telephone. Once a week a produce dealer drives through with fruits and vegetables grown outside the zone, Semenenko says, adjusting her green-and-red headscarf. A few hens cluck in her garden, but the pig had to be slaughtered a few years ago to pay the doctor. "When the Soviet Union still existed," she says, "I got 70 rubles for my pension, and that was always enough. But now I can't buy anything with my money." A well-known grievance of old people in post-Soviet countries.

Almost 200,000 inhabitants were evacuated from the contaminated parts of Ukraine in May 1986, areas that include the cities of Prypiat, Chernobyl and Poliske. The evacuation period was officially limited to three days, but those three days became weeks, months and finally years. According to Sergei Chernov, once a local reporter in Chernobyl, roughly 200 people secretly returned to their homes in 1987. Six years ago, twelve of the 80 towns were inhabited again. Today, only seven are.

Two elderly people live in Staryye Shepelichi, a town on the Ukraine-Belarus border, roughly ten kilometers from the disaster site. Between 60 and 70 people live in Chernobyl. In theory, all scientists and engineers who work in the area should leave for two weeks after a maximum of 15 days; in practice, no one enforces the rule.

Going to church in Chernobyl

The Ukrainian government has apparently grown used to stubborn pensioners refusing to listen to rules and warnings about radiation. Their monthly payments are delivered straight to the exclusion zone, in cash. There are now doctors, grocery stores and cafeterias in Chernobyl; there's even a church. "On important holidays, the pensioners are picked up from their villages by bus and driven to mass in Chernobyl," Chernov explains. He estimates that some 350 of the roughly 2000 people who returned to the exclusion zone after the disaster still live there today.

Last year, Ukrainian president Yushchenko visited the exclusion zone and offered the inhabitants apartments in the city of Brovary, east of Kiev. Half rejected the offer immediately. 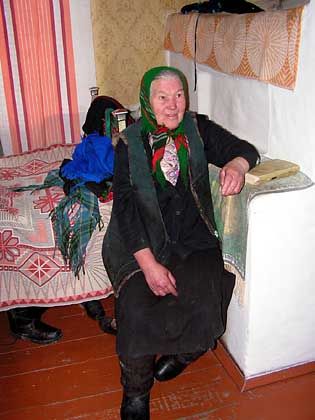 "The others are still thinking about it," Chernov says. He doesn't expect many of them to leave. "They've tried living in the city, and it was too much for them psychologically," he explains. "Why should they try again?" His voice betrays a certain admiration.

Hanna Semenenko is one of those resolved to stay. "You don't replant an old tree," she says. There's noise from the farmyard; the chickens need to be fed. Does she ever feel alone? "Of course I'm lonely," she replies. In 1987, there were 260 people in the village. "In the meantime, most of them have died." Soon she will probably be the youngest person in her village.

On her way to the farmyard, Hanna takes out some old photographs: her deceased husband, her son's wedding picture, a photo of her granddaughter as a small child. Hanna's granddaughter is now almost an adult, but Hanna hasn't been able to see her. "She's not allowed to come," the old woman says bitterly. Ukrainian authorities have banned adolescents from the exclusion zone. "They're crazy," Semenenko says, and looks sadly at the stranger in her room.