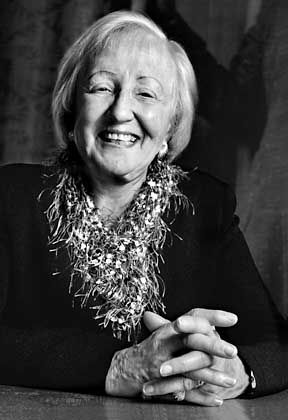 Lucille Eichengreen moved to California in 1949. She now frequently talks about her experiences during the Holocaust to schoolchildren and university students.

SPIEGEL: Mrs. Eichengreen, in 1941, along with your mother and your sister, you were deported and taken to the Lodz ghetto. What happened to your family there?

Eichengreen: My mother starved to death. She died on July 13, 1942. My sister Karin and I dug her grave with our own hands and buried her.

SPIEGEL: What happened to your sister?

Eichengreen: During the so-called resettlement program, she was taken to Chelmno and killed. I didnt find that out until after the war. According to the rules of the ghettos administration, 12-year-old children were actually not old enough for resettlement. But then the Germans decided that the whole procedure was going too slowly, so they came into the ghetto and simply took the people they wanted. That was three months after my mothers death.

SPIEGEL: Did you see her get transported away?

Eichengreen: Yes. She stood on the truck and kept looking at me until the truck was out of sight. I was the last person she had in her life.

SPIEGEL: In summer 1944 the ghetto in Lodz was liquidated. What happened to you?

Eichengreen: It was August 1944. We were taken to Auschwitz. To Birkenau.

SPIEGEL: Did you have any idea what to expect?

Eichengreen: No. At the beginning we didnt know anything. Words like "gas chamber" and "crematorium" didnt even exist. Pretty soon though people started whispering these words to each other. And we still didnt understand them. We just asked each other: Whats a crematorium? Whats a gas chamber? After a few days in Birkenau we then found out that they were killing people. Gassing them and burning them. After all, we could smell it and see the smoke.

SPIEGEL: How long were you in Auschwitz?

SPIEGEL: Do you not know exactly?

Eichengreen: I didnt have a watch or a diary or a calendar. I had absolutely nothing.

SPIEGEL: So you simply waited?

Eichengreen: Yes. Three times a day we had roll call. In the early morning we were given a small piece of bread and if we were lucky we would get some thin soup in the evening. There were 500 of us women in one small barrack.

SPIEGEL: What happened next?

Eichengreen: One day we were brought to Hamburg and put in the work camp Dessauer Ufer, a satellite camp of Neuengamme concentration camp. We slept on the floor of an empty storeroom and every morning SS guards marched us to work at the German shipyards Blohm & Voss.

Eichengreen: Yes. The work was tough, because it was winter -- it snowed and rained. We only had tattered clothing and something approaching a thin raincoat. It had a yellow stripe, which ran from the top to the bottom. We had shaved heads and it was really cold. All of us ended up with pneumonia and tuberculosis, and we just kept on working with bloody hands. In the end they brought us all to a big assembly camp, to Bergen Belsen, probably because the war was drawing to a close.

SPIEGEL: And that was when the camp had practically been abandoned to run itself, just a few weeks before liberation?

Eichengreen: Yes. There was hardly any food left. The dead lay on the paths and there were corpses in every barrack.

SPIEGEL: How do you deal with something like that? You were just 20 years old at the time.

Eichengreen: You notice it, you see it, you smell it, and then you look away. We knew that it was not possible to stay alive for long in Bergen Belsen.

SPIEGEL: When did you first notice that the war was about to come to an end?

Eichengreen: The first signal was that the SS guards in Bergen Belsen suddenly started wearing white armbands. But it wasnt until later that we realized what this meant. We had already seen them wear black armbands sometimes to mourn for someone. But white armbands? It was only when the tanks rolled down the main alleyway of the camp, and the British came out, that we realized that it was over. We were really happy for about a minute. But straightaway came the thought: Where is my family? Where are all the other families? My friend had lost her father and mother. I had lost my parents, my sister, my uncle, my aunt. Everyone. Then everyone just asked: When can we have some water and something to eat?