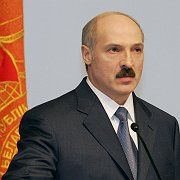 Belarusian President Alexander Lukashenko may be losing his friends in Moscow.

No other former Soviet republic is as friendly with Moscow as authoritarian President Alexander Lukashenko's Belarus. So cozy are the two, in fact, that the Kremlin hopes the 10 million-strong republic will even become part of the Russian Federation. Indeed, it was an idea that Lukashenko himself had once advocated.

Now, though, Lukashenko has turned his back on union with Russia, even going so far as to tell reporters last week that he is "categorically opposed to merging" with his oversized neighbor.

Lukashenko though -- despite being wary of Russian power and aspirations -- remains interested in maintaining close relations with Moscow. Indeed, having slammed the door on unity with Russia, Lukashenko went on to say he was interested in an even tighter relationship with the country.

The nuanced dance of keeping Russia within reach but at arms length is not easy. Belarus has had a special economic and military agreement with Russia since 1996 and sees considerable advantages in a powerful Kremlin. The Belarusian president himself is no enemy of highly concentrated, centralized power. He is considered an anti-democratic, authoritarian ruler throughout the West, having earned the nickname "Europe's last dictator."

Lukashenko is also a strong proponent of preserving the loose confederation of former Soviet republics -- the Commonwealth of Independent States (CIS) -- which many of its members see as simply a tool for Russian power. At a meeting of CIS foreign ministers in Minsk Monday, Lukashenko and Russian foreign minister Sergei Lavrov sang the group's praises and urged member countries to maintain the 12 country bloc.

It's going to be difficult. Georgia and Ukraine, which are both in the middle of bitter diplomatic rows with Russia, skipped the summit altogether, and other member countries like Moldova are questioning whether to stay a part of the alliance. Lukashenko rallied the former Soviet states to maintain the Russian-centric alliance and said reforming it may provoke collapse. "There are people in our organization who are strongly interested in ruining the CIS," he said. "If we want to play into our enemies' hands, we must accept reform."

Still, Lukashenko accepts that he must sometimes bite the hand that feeds him. The Kremlin's steady encroachment includes suggesting that Belarus adopt the Russian ruble as its national currency. Lukashenko rejects the idea, hanging onto the Belarusian ruble as a crucial -- if not simply symbolic -- demonstration of Belarusian sovereignty. Most visible, though, has been Lukashenko's open threats regarding the Kremlin-linked energy concern Gazprom, which wants to sell gas to Minsk at four times its current Russian-subsidized price. In early October, Lukashenko said he is prepared to sever all ties with Russia if the energy firm follows through with the plan and said that Russia would "lose its last ally" should prices be raised.

And what would happen if Russia tried to annex Belarus anyway? "It would be worse here than Chechnya," Lukashenko warned.