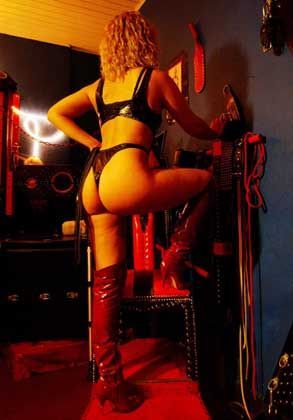 Prostitution may be legal in Germany. But the coming World Cup is raising questions about the dark side of the sex business.

By the early 70s, newspaper advertisements for prostitutes in cities like Rome or Paris were the norm. Not, though, in the provincial Bavarian capital. Indeed, with the sports world coming to visit, the city decided to ban sex workers from city streets and force them to ply their trade in the outskirts. Its reputation, after all, was at stake. The result was quickly to be found in the tabloids: "photo models" and "hostesses" filled the classifieds with mini announcements informing the visiting hordes where to find the "real Olympic flame."

This time around, the debate over what to do about the sex trade promises to be no less intense. Six months before the June 9 start of the World Cup soccer championship, anti-sex industry activists are getting ready to do battle. Prostitution profiteers -- their eyes firmly focused on the some 3 million visitors expected to converge on the 12 German cities hosting matches -- are likewise preparing to defend their territory. Even the government is gearing up.

Former minister for family affairs Renate Schmidt -- who left office last week with the swearing in of the new government under Chancellor Angela Merkel -- got the ball rolling by making the interior ministry and the federal office of criminal investigation responsible for preventing an influx of illegal prostitutes from abroad. Schmidt is convinced that the world will be watching and that the credibility of Germany's fight against human trafficking is at stake. The former minister even sent a stern letter to the German Soccer Federation demanding that the group live up to its "responsibility to society" by supporting measures to control forced prostitution and human trafficking.

At the same time, though, sex professionals are busy preparing for the expected influx of customers. New mega-brothels, more streets with prostitutes and first-class service are planned to help strip football fans of their money while at the same time maintaining an unmatched degree of sanitation.

The result is not just a clash between money and morals. Two world views are colliding with one another. On the one hand are those for whom soccer, sex and beer are all part of the World Cup package. If one needs to celebrate a victory -- or requires consolation after a loss -- call girls should be there to help out.

On the other hand are those who see the sex trade as one infested with criminality and immorality. They want to use the World Cup as an opportunity to, as the Deutscher Frauenrat puts it, "sensitize johns" and to "show the red card" to all forms of sexual exploitation.

In between these two fronts are the pragmatists -- like the city of Munich. The Bavarian capital, which is set to host the opening game of the World Cup finals, is expecting a 30 percent increase in the number of prostitutes in the city. "We don't want to disrupt the business," says Gottfried Schlicht from the city's police headquarters, "but we do want to uncover cases of forced prostitution."

Other German cities are making practical arrangements to handle the expected demand. Next to an area of street prostitution on the outskirts of Cologne, officials have constructed so-called "performance boxes" -- carport-like structures providing a bit of privacy for prostitutes and their punters, complete with condom vendors and snack machines. Other cities are considering adopting the model.

Berlin is likewise eyeing an increased presence in the sex trade. Already, one of the biggest brothels in Germany has opened in the neighborhood of Charlottenburg -- with room for up to 100 prostitutes. In addition, a number of red-light moguls have announced their intention of turning a major street near Berlin's Olympia Stadium -- where the World Cup final is to be played -- into a new area of street prostitution.

In Hamburg, the neighborhood of St. Pauli -- home to the world famous red-light district surrounding the Reeperbahn -- wants to use the World Cup to re-establish its reputation as one of the global sex capitals. The campaign is called "Fair beim Verkehr" (roughly: "fairness in sex") and hopes that memories of Hamburg's brothels will remain long after visitors can no longer remember who won the World Cup tournament. The hope is also that the Reeperbahn can quickly shed its increasingly smutty image. The some 200 members of a Reeperbahn business consortium are concerned about the recent increase in complaints about unfair business practices in the sex industry. "Some of the models are doing a terrible job," complains consortium spokesman Karl-Heinz Böttrich-Scholz. 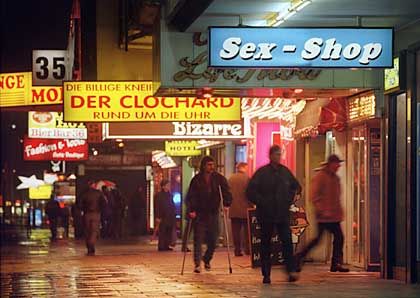 The Reeperbahn in Hamburg is hoping to clean up its image in time for the World Cup.

Specifically, he is concerned about the widening practice of attracting johns with a minimum price of €30 -- but when show time rolls around, the price has often quadrupled, complains Böttrich-Scholz. And that's not the only type of tart trick. More and more johns are complaining, says Detlef Ubben of the Hamburg police, of hookers coaxing credit cards complete with PIN numbers from their customers and then charging much higher amounts than the agreed-upon price. "In the heat of the moment, common sense goes out the window," says one police investigator summing up the problem. But the police and the Reeperbahn business consortium wants to protect even the most foolish of World Cup visitors and has begun a dialogue with brothel owners. They are even considering sending out test johns to uncover fraudulent practices.

The value of German women

Ina, a 27-year-old prostitute in St. Pauli, finds the "talk about rip-offs" completely out of proportion to the actual problem. The prostitution business in Hamburg is incredibly competitive, she says, and argues that no brothel can afford to take its customers for a ride.

On the other hand, she says, there are a number of men who want to "pay the price of an Opel Corsa but expect to receive a Ferrari". What's the problem, she asks tossing her long, brown hair to the side, with negotiating a high price "if I know that a customer will take forever because he is drunk?"

She is looking forward to the foreign customers that will flock to Germany during the World Cup. She is hopeful, as she puts it, "that they still can recognize the value of German women."