The first match between chess grand champion Vladimir Kramnik and the computer "Deep Fritz" took place in 2002. And technology took one on the chin -- at least at the start. Kramnik raced out to a 3:1 lead before he tired and "Deep Fritz" was able to climb back into it. The match finished 4:4.

That was then. Now, with his IQ boosted by countless gigabytes, Fritz has been granted a rematch against Kramnik, whose brain capacity is presumably unchanged. Fritz has been overhauled and improved, and is now able to look into the future to the tune of nine moves for both players. He can calculate 8 million positions per second.

And Kramnik? His only hope is to discover the computer's weaknesses. That, in fact, is exactly what he tried to do in the first match of the series, being played in the Art and Exhibition Hall of the Federal Republic of Germany in Bonn. In Saturday's opener, he chose a strategy which the computer had not been trained for -- and seemed to have the upper hand for awhile. But the computer fought back and the match ended in a draw.

In the second match, Kramnik's luck seemingly ran out. He lost the match, making Wednesday's game an important one if the humans have any hope of maintaining paritiy with the machines. 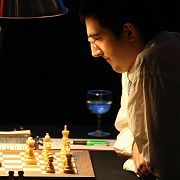 Even that, though, should be seen as something of a success for Kramnik, what with the improvements made to "Deep Fritz." This is, after all, the first time in the history of man vs. machine matches that the machine entered the duel as the favorite. And the question remains: Have the machines overtaken us?

On SPIEGEL ONLINE International you can watch the series live -- every match, every move and with audio commentary by Yasser Seirawan, a four-time US chess champion, a one-time world junior chess champion and author of numerous chess books.

The matches will be played every other day with the first match already having been completed on Saturday. After Monday's match, the next will be on Wednesday, then Friday, Sunday, with the finale taking place on Tuesday, December 5. Every match begins at 3:00 p.m. CET -- or 9:00 a.m. on the East Coast. And every match will be right here on SPIEGEL ONLINE International.