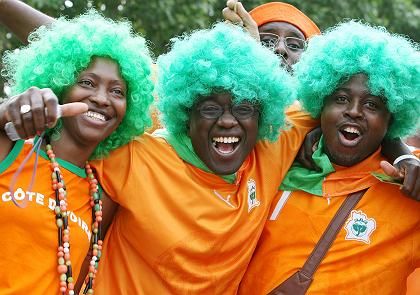 Ivory Coast is hoping to win one for its fans.

African Nations Cup finalists Ivory Coast have their hearts set on a victory in their final World Cup appearance Wednesday against the demoralized and depleted Serbia and Montenegro side.

Coach Henri Michel's goal for his players is simple: "To show that we cannot leave like that," said Michel, who has signaled that it was likely to be his last game with the "Elephants".

"We have just one match left and we don't want to spoil it," said defender Kolo Toure. "We want to beat Serbia and Montenegro to bow out with our heads held high."

Both squads have lost hope of qualifying from Group C after succumbing to favorites Argentina and the Netherlands, and are likely to be rudderless when their managers leave after their final games in Germany.

Despite the shared fate, their form on the field and spirit differ sharply. On their first World Cup appearance, the "Elephants" conceded narrow 1-2 score lines to two of the most experienced nations in the tournament and closely played Group C's power-house favorites in each match. If they draw, they will come a creditable third after Serbia-Montenegro's goal difference suffered with the 0-6 humiliation at the hands of Argentina.

The side will be without striker Didier Drogba, who picked up his second yellow card last week, in Munich. But the west Africans need to sweeten Michel's bitterness and seek Africa's second success after Ghana's 2-0 victory over the Czech Republic.

"Everyone tells me this team plays great football. What's more important is the result. And the result was not good. We're out and that's the bottom line," said Michel, one of the most experienced managers in Germany. "It means that Ivory Coast is still not at the level of the big teams at the World Cup."

His Serbian counterpart Ilija Petkovic, who was sharply criticized by top players, took the blame for the Argentina's six goal frenzy and announced over the weekend he would not seek to renew his contract as coach once the team returns home.

But the injury-plagued Serb and Montenegrin players appeared demoralized after their drubbing by Argentina. They failed to repeat the form that kept a virtually clean sheet in World Cup qualifying and had made them one of Europe's most incisive contenders. The squad also suffered a severe blow with the training injury to full back Nemanja Vidic.

Meanwhile, the press in Serbia ripped into the team after the match against two-time World Cup winners Argentina, calling it a "disgrace."

"It turned out that the difference between the wishes and the capabilities of our team at this World Cup was too big," said the Vecernje Novosti daily.

Midfielder Ivan Ergic said: "To lose 6-0 is horrible, but we were not completely fit and we have had a lot of pressure put on us by the press and the media back home."

On the field, the Serbs will be blunted without their highly fancied striker Mateja Kezman, who was sent off against Argentina.