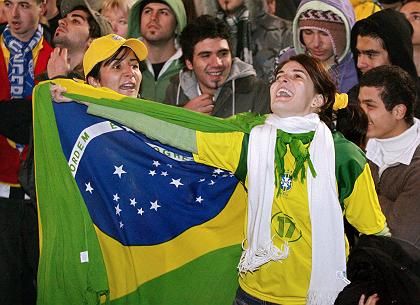 As usual, Brazilian fans have had a lot to celebrate this World Cup.

Brazil Coach Carlos Alberto Parreira said the five-time World Cup champions are only now coming to grips with the sacrifices demanded by the tournament and there should be no sentimental attachment to their final Group F match in Dortmund on Thursday.

"We played better than we did against Croatia and we will play even better in the next one," Parreira said after Brazil beat Australia 2-0 on Monday to qualify for the knockout stages.

On Japan's trainer bench, however, sits Zico -- the former star of three Brazilian World Cup campaigns. He is shaking up Japan's formula up front to get the goals his side need to have any chance of reaching the knock-out stages for the second straight World Cup. "We are not confronting an awful monster," Zico said. "They are a strong team. But, as professionals representing Japan, we must never give up as long as there is the slightest of chances."

Japan lost to Australia 3-1 and shared a goalless draw with Croatia. Both Japan and Croatia trail two points behind Australia. To clinch the last of the group's two second-round berths, Japan must beat Brazil by a margin of two goals, provided that Croatia defeats Australia by no more than one goal.

Brazil's galaxy of stars, including Ronaldo, Adriano and Ronaldinho, have so far failed to sparkle with Kaka salvaging a 1-0 draw over Croatia in their opener.

Parreira said he might rest injured and yellow-carded players in the match against the three-time Asian Cup winners. Midfielder Gilberto Silva and defender Cicinho were seen likely to make the starting line-up. In Tuesday's training, Gilberto Silva linked up in midfield with Kaka and Juninho with Ronaldinho. The Arsenal player could come in for either Ze Roberto or Emerson who has a yellow card.

Cicinho, impressive at the Confederations Cup last year, could fill in for cautioned skipper Cafu. But the coach said he would start Real Madrid superstar Ronaldo as "he needs to get his rhythm" although he is "not ready for 90 minutes." Zico said he would try to boost Japan's infamous lack of firepower up front as his squad focused on shooting in the Tuesday evening session with frustrated Japanese supporters booing at missed shots.