Call it the Battle of Nuremberg. Portugal defeated the Netherlands in a nasty and ill-tempered 1-0 brawl on Sunday that saw both teams have two players sent off. Russian referee Valentin Ivanov brandished a record 20 cards in total -- 16 of them yellow -- as Portugal scraped through to extend coach Luiz Felipe Scolari's record World Cup winning streak to 11 matches.

Ugly scenes marred the match as first Costinha, then Khalid Boulahrouz, then Deco and finally Giovanni van Bronckhorst saw red. Portugal went 1-0 up after 23 minutes but put themselves in trouble when Costinha received his second yellow just before halftime.

They also lost Cristiano Ronaldo to a right thigh injury caused by Boulahrouz early on for a challenge that could have warranted a red card. But Boulahrouz eventually received his marching orders for later elbowing Luis Figo.

The Portuguese captain was fortunate to stay on the pitch after slightly headbutting Mark van Bommel, who belatedly and theatrically collapsed to the ground. But Deco would reduce the Portuguese to nine men for stupidly throwing away the ball after already having been booked for a reckless tackle.

The Dutch were also cut to nine after Van Bronckhorst trudged off in the dying seconds of the match, killing off the Netherlands' faint hopes of taking it into extra time.

The disciplinary nightmare ruined a promising encounter between two of the tournament's promising teams which had amassed 32 matches unbeaten between them. It was Marco van Basten's first competitive defeat as Dutch coach and leaves the Netherlands still waiting for their first win against Portugal since 1991.

Maniche was on target for his second goal of the tournament as the Euro 2004 finalists cut their way through the Dutch defense after 23 minutes. Maniche, who also scored a blinder against the Dutch in the 2-1 victory in the Euro 2004 semi-finals, said that the victory was a team effort. "We are a talented squad and we deserved the victory," he said.

However, he blamed the referee for overreacting to what he thought was not a violent match. "The referee did not contribute to the spectacle," said the 28-year-old. "I don't think that it was such a violent match to merit so many sendings-off."

The Dutch signaled their intent immediately after half-time when Phillip Cocu hit the bar and van Bommel had a skidding effort scrambled wide by Ricardo. Kuyt also saw a good effort parried by Ricardo before Maniche tested Edwin van der Sar at the other end. 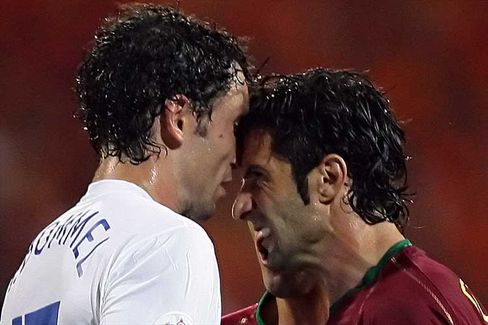 But the match threatened to disintegrate after an hour when Figo, angry about a foul on Deco, was booked for headbutting van Bommel. Minutes later Boulahrouz elbowed Figo on the left touchline, earning his second yellow and sparking a furious shoving match between the two benches. More trouble followed when Wesley Sneijder shoved Petit away from the prone John Heitinga, who had been fouled by Deco.

Deco's dismissal with just over 10 minutes left incensed Scolari, who had been on and off his bench all night. Meanwhile the Netherlands were growing increasingly desperate with Kuyt firing straight at Ricardo one-on-one before seeing an acrobatic effort blocked. But the Dutch challenge was effectively grounded by van Bronckhorst's late dismissal and the elated Portuguese burst into celebration on the final whistle.

"It was an extremely difficult game. We were good in the first half. After we started playing with nine men it was a lot of work," Figo said. "The team should be congratulated for demonstrating such character."

They will now meet England in the quarter-finals, but their depleted squad will be without key players Deco, Costinha and possibly the injured Ronaldo.