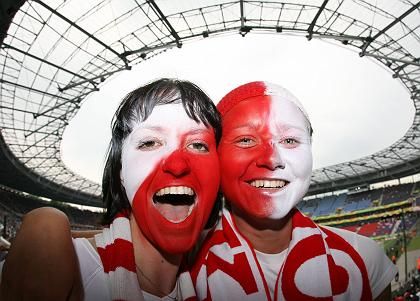 Polish fans finally had something to smile about on Tuesday.

Two goals from defender Bartosz Bosacki -- his first for his country -- gave Poland a comeback 2-1 victory over Costa Rica in their meaningless Group A encounter in Hanover on Tuesday.

With Germany and Ecuador already qualified for the final 16, the teams were playing for the futures of their under-fire coaches and to avoid last spot in the group. And, of course, for pride.

Costa Rica opened the scoring with a well-worked free kick in the 25th minute with Poland grabbing a hotly contested equalizer just eight minutes later. The winner came midway through the second half with Poland on top after a good spell of pressure.

All-time leading scorer Paulo Wanchope, who nabbed two goals in Costa Rica's 4-2 loss to Germany in the World Cup opener, was playing in his last match in the Costa Rican national team jersey. The leggy, long-striding Wanchope had banged in 45 goals in 71 matches for Los Ticos but there was to be no victorious farewell for the former Manchester City star.

Both teams opened the match cagily with Costa Rica having the first chance in the eighth minute -- a left-footed free kick from Ronald Gomez cannoning off a defender for a corner. There was little for the huge Polish support to get excited about early with their labored build-ups coming up empty.

Costa Rica opened the scoring in the 25th minute after the best move of the game. Wanchope was impeded by Poland captain Jacek Bak on the edge of the box and dead-ball specialist Gomez hit the target from the resulting free kick. His low shot sped through the gap left by several Costa Rica players vacating the wall and went under the legs of goalkeeper Artur Boruc who swung wildly at the ball.

Poland drew level in controversial circumstances in the 33rd minute. An unmarked Bosacki hit home a corner from Maciej Zurawski but Costa Rican keeper Jose Porras seemed to be tripped as he came out to intercept the cross.

It was the central defender's first goal for his country and Poland's first goal of the 2006 World Cup. Gomez was booked for protesting the goal with referee Shamsul Maidin of Singapore after the half-time whistle.

Poland started the second half brightly and took the lead from another corner in the 66th minute after Porras had saved a stinging shot from Jacek Krzynowek. Bosacki rose above Wanchope to meet the corner at the back post and powered a header into the net.

Wanchope had the ball in the net in the 81st minute for what would have been a dream equalizer in his last game but he was correctly ruled offside.