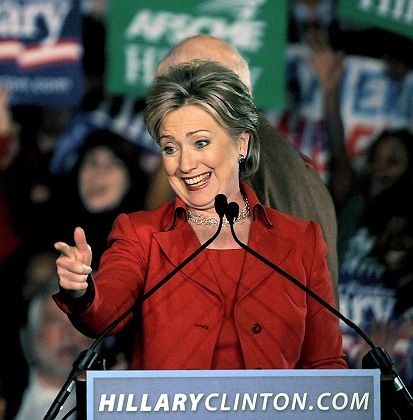 Hillary Clinton is fighting on with her campaign after winning the support of older women voters in Texas, Ohio and Rhode Island.

Some women in their 30s, 40s and early-50s who favor Barack Obama have a phrase to describe what they dont like about Hillary Clinton: Shoulder-pad feminism.

They feel that women have moved past that men-are-pigs, woe-is-me, sisters-must-stick-together, pantsuits-are-powerful era that Hillarys campaign has lately revived with a vengeance.

And they dont like Gloria Steinem and other old-school feminists trying to impose gender discipline and a call to order on the sisters.

As a woman I know put it: Hillary doesnt make it look like fun to be a woman. And her I-have-been-victimized campaign is depressing.

But Hillary -- carried on the padded shoulders of the older women in Texas, Ohio and Rhode Island who loved her I Will Survive rallying cry that I am a little older and I have earned every wrinkle on my face -- has been saved to fight another day.

Exit polls have showed that fans of Hillary -- who once said they would be happy with Obama if Hillary dropped out -- were hardening in their opposition to him, while Obama voters were not so harsh about her.

Three Hillary volunteers, older women from Boston, approached a New York Times reporter in an Austin, Texas, parking lot on Tuesday to vent that Hillary hasnt gotten a fair shake from the press. They said that they used to like Obama but now cant stand him because they think he has been cocky and disrespectful to Hillary.

As Hillary, remarkably and cleverly, put Obama on the defensive about a real estate deal, health care and Nafta, her campaign ratcheted up the retro battle of the sexes when they sent Dianne Feinstein onto the Fox News Sunday-morning talk show to promote the idea that Hillary should not be forced out, regardless of the results of Tuesdays primaries, simply because shes a woman.

For those of us that are part of a woman need not apply generation that goes back to the time I went out to get my first job following college and a year of graduate work, this is an extraordinarily critical race, the senator said.

People will have to choose which of Americas sins are greater, and which stain will have to be removed first. Is misogyny worse than racism, or is racism worse than misogyny?

As Ali Gallagher, a white Hillary volunteer in Austin told The Washington Posts Krissah Williams: A friend of mine, a black man, said to me, My ancestors came to this country in chains; Im voting for Barack. I told him, Well, my sisters came here in chains and on their periods; Im voting for Hillary. 

And meanwhile, the conventional white man sits on the Republican side and enjoys the spectacle of the Democrats identity pileup and victim lock.

Just as Michelle Obama urged blacks to support her husband, many shoulder-pad feminists are growing more fierce in charging that women who let Obama leapfrog over Hillary are traitors.

Julie Acevedo, a precinct captain for Obama in Austin, noticed that things were getting uglier on Friday, during the early voting, when she saw some very angry women just stomping by us to go vote for Hillary. They cut us off when we tried to talk about Barack.

Im 46, Ms. Acevedo, a fund-raiser for state politicians, said Tuesday night. Maybe I missed it by a few years, but I dont know why these women are so fueled by such hostility and think other women are misogynists if they dont vote for Hillary. Its insulting and disturbing.

She said that if Obama definitively outpaces Hillary, she will work to heal the wounds and woo back women who are now angry at him.

Watching Bill Clinton greet but not address -- the Big Dog has been muzzled -- an excited group of students at Texas State University in San Marcos on Tuesday, 19-year-old Allison Krolczyk said she was leaning toward Obama and felt no gender guilt about voting for him. Not at all, she said. I think theyre both pretty amazing.

The crowd held up their camera phones to capture the former president, in his bright orange tie and orange-brown ostrich cowboy boots.

We love you, Bill! yelled one boy. You did a good job, except for Monica.