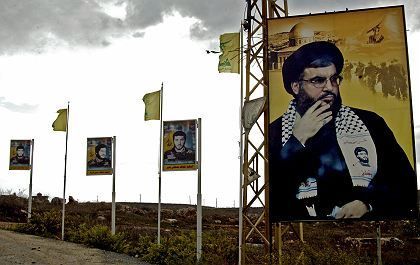 Hezbollah chief Hassan Nasrallah has revealed that the militant group is in indirect talks with Israel.

Arch-enemies Israel and Hezbollah are not known for their propensity for sitting down at the negotiating table together. So it comes as something of a surprise that they are finally talking to each other about a possible prisoner swap -- even if they are doing it through a third party.

The revelation that the two parties are holding negotiations about a possible exchange of prisoners came from Hezbollah leader Sheikh Hassan Nasrallah Tuesday. "We have reached the stage of exchanging ideas or more accurately conditions," said Nasrallah, speaking on Hezbollah's own TV station al-Manar.

Nasrallah said the talks were being brokered by a UN envoy but gave no further details. Israel has so far made no comment. The statement by Nasrallah was the first proof that such talks are actually taking place. "The delegate appointed by the UN secretary-general is conducting this mission and is meeting a Hezbollah delegation and also on the other side Israelis concerned with this file," the militant leader said.

The Lebanese Shiite group is holding two Israeli soldiers, Ehud Goldwasser and Eldad Regev, which it seized in July during a cross-border raid into Israel. It is demanding the release of several hundred Lebanese and Palestinian prisoners sitting in Israeli jails in return for the release of the two soldiers. Israel, however, has repeatedly refused to consider such a deal.

Hezbollah's kidnapping of the two soldiers on July 12 sparked a 34-day war which left around 1,200 Lebanese and 157 Israelis dead. The conflict ended in mid-August following a UN Security Council resolution which called for the soldiers' unconditional release.

SPIEGEL ONLINE reported in October that an officer with Germany's intelligence service, the Bundesnachrichtendienst (BND), had been on a secret UN assignment since September sounding out conditions for a possible prisoner exchange.

In 2004, the BND played an important role in a prisoner exchange which secured the release of a kidnapped Israeli businessman who had been held for four years. The Israelis agreed to release 400 Arab prisoners as part of the deal.

Meanwhile, six Palestinians were killed during an Israeli raid in the Gaza Strip Wednesday. Infantry units supported by tanks entered the northern Gaza town of Beit Hanoun just before dawn, with air strikes following. Five of those killed were armed Palestinian militants while one was a Palestinian policeman, the news agency Reuters reported. The raid, the biggest since Israel launched its offensive into Gaza four months ago, also left 45 people wounded. A spokesperson for the Israeli army confirmed that an operation against rocket launching infrastructure had been carried out in Beit Hanoun. The armed wing of Hamas said that its gunmen had killed an Israeli soldier, but this has not been confirmed by the Israeli army.

Israel pulled out of Gaza in Sept. 2005 but re-entered the coastal strip four months ago in an attempt to recover the Israeli soldier Gilad Shalit, who was seized by Hamas-linked militants in June in a cross-border incursion. The offensive's aims have since broadened to include stopping rocket attacks from Gaza. According to the Israeli military, 300 rockets have been fired from Beit Hanoun since the beginning of the year.

Hamas said the raid would have a "negative influence" on talks currently underway in Egypt to try to broker a deal that could lead to the release of Shalit. A Hamas delegation travelled to Cairo on Tuesday, where Egyptian officials stepped up pressure on them to form a new Palestinian cabinet that recognizes Israel and to release the captured soldier. "If the soldier is released, this would open the way for a resumption of the peace talks between the Palestinians and the Israelis," Egyptian Foreign Minister Ahmed Aboul Gheit told reporters.

However, Hamas spokesman Ismail Radwan refused to give any ground. "The release of the Israeli soldier will only come after the enemy fulfils the conditions set by the captors," he said.