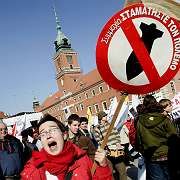 A woman protests during an anti-war demonstration in central Warsaw against a proposal to deploy a US missile shield in central Europe and against Polish military involvement in Iraq and Afghanistan.

Much of Europe is arguing over a Washington proposal to plant in Poland fewer than a dozen antimissile missiles that might not work, to guard against an Iranian threat that may not exist.

The main party in Polands governing coalition is inclined to accept the deal, and the countrys president, Lech Kaczynski, known in Europe for his fierce conservatism and nationalist talk, has been invited to the White House in July to talk things over with President Bush.

The Czech Republics fragile government coalition, meanwhile, has agreed to negotiate placement of high-powered American tracking radar on its soil despite widespread local opposition. The radar, now in the Marshall Islands, would help guide the antimissile missiles from Poland to hit and destroy their fast-moving targets in outer space.

The European missile shield would be part of an integrated system that is already taking shape in California and Alaska, where the United States expects to deploy 30 long-range interceptors to guard against missile attack by the end of 2008.

Washington says the Eastern European system could act in time to protect most of Europe and all of the United States and even much of Russia from a nuclear attack by Iran, that is, if Iran ever developed or obtained nuclear weapons and rockets with a range long enough to reach those targets, as well as a desire to fire them. They dont have those armaments now, but they might by 2015, the Bush administration says.

Not everyone agrees that a threat is imminent, but Washington isnt asking anyone to help pay for the system.

Why, then, are so many people unhappy?

It is not the cost. The United States has already spent tens of billions of dollars on the missile shield. A few more billion wont draw that much attention from Congress or taxpayers.

Nor is it Russias complaining that the antimissile missiles will chip away at its nuclear position. The 10 interceptor missiles that Washington is proposing to put in Poland could hardly stop Russias hundreds of intercontinental ballistic missiles in the event of all-out war.

No, what is going on in Europe has less to do with missiles than with diplomacy and European queasiness about American power and influence on the Continent.

The European Union is upset because Washington is negotiating bilaterally with Poland and the Czech Republic about something that affects Europe as a whole. The union has been trying for years to patch together a coherent European security and defense policy independent of NATO, and it doesnt help when member states start cutting deals with Washington on their own.

Many Europeans are also offended that the talks are not being routed through NATO, which has been struggling to stay relevant ever since the cold war.

The offer created a situation where it isnt clear what the role of NATO is in providing collective security, says Ondrej Liska, a leader of the Czech Green Party, which is a member of the Czech Republics governing coalition.

NATO will discuss the subject on Thursday.

But the Bush administration knows that reaching a consensus on such a delicate subject within the recently expanded NATO, now with 26 member nations, would take longer than it could afford. It is rushing to get the program far enough along that the next administration would be reluctant to kill it.

Russia, meanwhile, is upset because the little missile base in Poland and its companion radar base in the Czech Republic would give the American military its largest and most permanent footprint yet in the former territory of the Warsaw Pact.

The Russian foreign minister, Sergey V. Lavrov, complained in an article in the Financial Times this month that it was unacceptable for the United States to use the European Continent as their own strategic territory.

Russias lower house of Parliament issued a unanimous statement that said talk of the antimissile shield was already bringing about a new split in Europe and unleashing another arms race.

Is another cold war looming? Not yet. But Poland is buying American F-16s and Russia is moving surface-to-air missiles into Belarus near Polands border, and tensions are deepening.

After the fall of the Berlin Wall, as Soviet troops withdrew from Eastern Europe and America began to talk about closing bases in Germany, Europe looked as if it might become the big, peaceful, postmodern federation that European Union architects had long dreamed of: a humanist club where conflicts at home and abroad would be resolved by talking everything to death instead of killing.

Then the Balkans blew up and the United States military stepped in to stop a war that Europe seemed incapable of facing. That frustrated Russia, which supported Serbia in the war, but Russia could not offer much help because it was still impotent and staggering from the collapse of its Soviet empire.

Now Russia is rich with oil and gas and its military spending is soaring. The rest of Europe -- for Moscow increasingly defines itself as European -- is wary of stirring up old animosities.

We should be very careful about encouraging the creation of new dividing lines in Europe or the return of an old order, President Jacques Chirac of France said last month when asked about the American antimissile missile plans.

The former Soviet president Mikhail S. Gorbachev put it more succinctly when he told the official Russian news agency, Ria Novosti, last week that It is all about influence and domination in Europe.