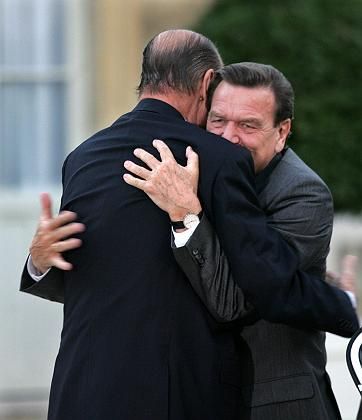 Schröder developed a close relationship with French President Jacques Chirac. Too close, some would say.

It's hard to imagine Angela Merkel giving French President Jacques Chirac a bear hug, or taking a cart ride through the Russian snow to spend Christmas with Russian President Vladimir Putin, or inviting either of them to her holiday home in eastern Germany for a fireside chat and a slice of her homemade plum cake.

A firm handshake and polite smile is all that foreign leaders are likely to get from the reserved pastor's daughter who is set to become the first female leader of Europe's largest country next week.

The 51-year-old physicist who only entered politics after the 1989 fall of the Berlin Wall remains a stranger to many in Germany, let alone abroad. As she prepares to take power only two things seem certain about her foreign policy -- her first steps onto the world stage will be very cautious, and her style will lack the exuberance of her predecessor Gerhard Schröder. The outgoing chancellor became well-known for his back-slapping personal ties with the leaders of France and Russia, sent troops into hostile action in Kosovo and Afghanistan for the first time since World War II, and defied US President George W. Bush over Iraq.

"I can't see her pursuing a 'bear hug' policy," said Frank Umbach, analyst at the German Council on Foreign Relations. "She may also prove more predictable to Germany's partners than Schröder was," he said. But at present, it's hard to tell what her foreign policy will look like because she has been forced to share power with Schröder's Social Democrats to form a government.

The new foreign minister will be Schröder's former right hand man, Frank-Walter Steinmeier, who as head of the chancellery backed the policy of condemning Bush's attack on Iraq, a stance that won Schröder re-election in 2002 but led to a diplomatic crisis from which US-German relations have not yet fully recovered.

"At the moment it's hard to be certain about Merkel's foreign policy because she has yet to make key appointments in her chancellery," said Umbach. "Steinmeier is viewed with some suspicion both in the United States and in eastern European nations because he was associated with Schröder's foreign policy."

Yet insiders say Schröder's departure in itself will lead to warmer relations because he and Bush just don't like each other. And Bush will remember how Merkel visited Washington in February 2003, at the height of the diplomatic wrangling that preceded the invasion of Iraq, to voice her support for US policy in Iraq.

Germany's new coalition appears committed to improving trans-Atlantic ties. Its 191-page government program, hammered out after four weeks of power-sharing talks between Merkel's conservatives and the Social Democrats, devotes several passages to the need for a better understanding between the United States and Europe.

"We want to pursue trans-Atlantic relations that look to the future without forgetting our common history," the program says. "For that, it is essential to have a close relationship of trust between the United States and a self-confident Europe that sees itself not as a counterweight, but as a partner."
It adds: "Partly in order to improve the resolution of trade disputes, we want to promote a better understanding of the United States in the German public and a better understanding of Europe and Germany in the United States."

Werner Weidenfeld, professor of politics at Munich University, said pledging good relations with America would have been a statement of the obvious 10 years ago, but wasn't anymore. "The fact that those sentences were in the government program is a sign there was a problem," he said.

What does the US want?

The commitment to warmer ties will be welcome in the US administration, which is already coming up with a wish list. Daniel Fried, the US assistant secretary for European and Eurasian affairs, said during a visit to Germany this week that the United States is seeking more help for Iraq from the German government.

But Merkel's desire to please Bush is far from limitless. She has already ruled out sending German troops to Iraq because it would cause a public outcry in Germany. At best, she may step up German involvement in training Iraqi security forces outside the country, or provide other non-military assistance to the Iraqi government, analysts said.

Meanwhile Merkel and her party remain opposed to full Turkish membership of the European Union, instead preferring a "privileged partnership" for the Turks. The US, on the other hand, wants to see its strategic partner firmly integrated into Europe -- one of the few major foreign policy goals Schröder and Bush could agree on. Indeed, in forging the coalition agreement with Schröder's SPD, Merkel's party agreed to drop any reference to a "privileged partnership" for Turkey and she has promised to live up to the agreements already entered into by the Schröder government. 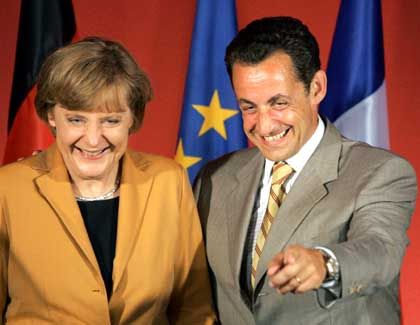 The future of German-French relations may look like this.

"I expect a change in tone and style and that's a good thing because a lot of damage has been done. But at present it's difficult to see what concrete changes there will be," said Ulrike Guerot, an analyst at the German Marshall Fund, an American group that promotes cooperation between the United States and Europe.

"The United States expects concrete action by Germany and the European Union in a number of fields such as Turkey, EU expansion and deepening, and Iraq, and there is a risk those hopes will be disappointed."

Merkel in any case has far too much on her domestic plate to devote a lot of time to foreign policy. Her government has made tackling Germany's massive unemployment a priority and is hoping to jump start the lagging economy. There will likely be little in the way of major foreign policy initiatives, at least initially, analysts say.

"Merkel has to focus on getting the economy right, France has its riots to contend with. Europe's nations are too preoccupied with sorting out their domestic mess to pursue foreign policy with much energy at the moment. There's a risk of a post honeymoon depression between Germany and the United States," said Guerot.

It would be unfair to expect too much of Merkel from the start. Her predecessors Schröder and Helmut Kohl, who liked to portray themselves as world statesmen, at first struggled to define an international role for themselves. Arguably, neither of them reached the stature of Willy Brandt, the Social Democrat Chancellor who won the Nobel Peace Prize for seeking rapprochement with the Communist bloc in the early 1970s, and who symbolized Germany's atonement for its Nazi past by falling to his knees before a memorial to the victims of the Warsaw Ghetto Uprising, a picture that made world headlines.

Schröder's departure effectively ends the special relationship he had forged with Putin and Chirac in a three-way axis that critics said had divided Europe. Merkel has said little about her foreign policy in recent weeks but she has signalled one key change - in future, she told a news conference at the weekend, Germany would pay more attention to the wishes of the smaller EU states. 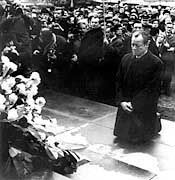 Reconciliation: Chancellor Willy Brandt kneels down at the monument to the 1943 Warsaw Ghetto uprising during a visit to Warsaw in 1970.

That should be welcome news for many of the bloc's 25 members who have felt steamrollered in recent years by the Franco-German "engine."

"Schröder damaged German interests by not consulting EU partners enough and frequently just adopting the French position," said Umbach. "Franco-German co-operation will remain important but in a European Union of 25, the Franco-German engine on its own is not enough to drive forward integration. I think German foreign policy will become more predictable under Merkel -- in the wake of the Iraq war it had become unpredictable both in terms of EU policy and trans-Atlantic relations."

Regarding relations with France, the coalition agreement is polite but equivocal. "German-French co-operation remains indispensible as an important source of impetus and will serve the interests of our partners. Alongside that we want to instil a new quality and intensity into the co-operation with our neighbors and the new member states."

Ties with Britain are also likely to improve after a marked deterioration in recent months during which British Prime Minister Tony Blair had backed Merkel's bid to become Chancellor. Merkel, Blair hopes, will be able to do more than Schröder to revamp the sluggish German economy, although initial analyses of the coalition agreement have not led to expectations of immediate improvement.

There is another element of uncertainty about Merkel's international presence that has kept commentators busy. What will be the role of her husband, the fiercely reclusive chemistry professor Joachim Sauer? Will he accompany her on foreign trips as "First Husband?" During summit meetings, will he take part in the wives' programme while his own wife helps shape the world?

It seems unlikely that Sauer, an authority in the field of quantum chemistry, will play a major role. He is so media shy that he has been dubbed "Phantom of the Opera" because one of his rare public appearances at Merkel's side is at the annual Wagner opera festival in Bayreuth.

The world may see a different Merkel in a couple of years when domestic policy starts to wear her down. "It's often that way - chancellors initially try to get things done domestically and when they realise how hard that is they develop an interest in world affairs," said Umbach.