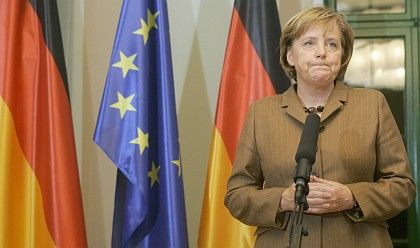 Turkey could be in deep, deep trouble when it comes to its aspirations to join the European Union, German Chancellor Angela Merkel said over the weekend. In an interview with the German daily Süddeutsche Zeitung, published on Monday, she indicated that she is expecting Turkey to take steps toward opening its ports to goods from Cyprus -- in accordance with the Ankara Protocols -- and to officially recognize the country.

"We need an implementation of the Ankara Protocols regarding unrestricted trade with Cyprus too," she said. "Otherwise, the situation becomes very, very serious when it comes to the continuation of Turkey's accession negotiations. I appeal to Turkey to do everything to avoid such a complicated situation and not to lead the European Union into such a situation."

She said that she cannot imagine negotiations continuing without concessions made by Ankara toward opening up its ports to Cypriot ships. A last ditch effort on Friday by the Finnish EU presidency to resolve the deadlock between Turkey and Cyprus failed to produce a solution. President of northern Cyprus Mehmet Ali Talat rejected the deal saying he wasn't getting enough in return. The proposal would have seen the Turkish-controlled part of the island turn over the port of Famagusta to EU control and to cede Varosha -- a former seaside resort -- to the Greek Cypriots. In return, the EU would lift its embargo on northern Cyprus.

The diplomatic flurry comes just days before a progress report on Turkey's accession process is to be issued by the European Commission. The report is widely expected to be scathing.

The Süddeutsche interview provides a preview as Merkel is set to take over the EU presidency in January and marks the first extensive interview focusing on her plans and hopes for her six-month stint. European energy policy, a common EU position on combating global warming and cutting back on bureaucracy within the EU are all projects she hopes to further while in office.

She has also said that she would like to get the European constitution back on track, but said that the EU needs to work on becoming more connected with its citizens. "People need to have something they can touch," she said, "whether it be university exchanges or research programs. That's why the constitution cannot just be a document to increase efficiency -- one which provides new rules on voting."

Merkel once again seemed to indicate her skepticism regarding a further expansion of the EU. While she said that the Balkan countries need to be given the opportunity to join the 25-nation club -- "otherwise our great efforts at stability will be for naught" -- she makes clear that further expansion should be treated with caution.

"When it comes to geographic borders, we have to develop an ambitious policy with regards to our neighbors," she said. We have to "make clear: We're not rejecting you but we can't promise you full membership."