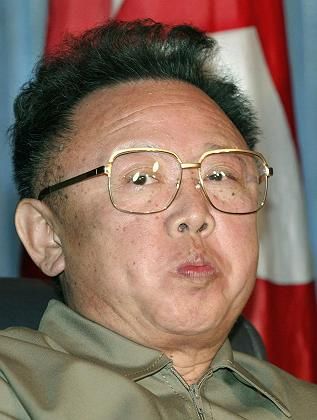 The Taepodong-2 was one of seven missiles test-fired by North Korea on Wednesday. They all fell harmlessly into the Sea of Japan, but South Korean officials said the long-range missile had malfunctioned, suggesting it was intended for a more remote target.

Japan's conservative daily Sankei said Japanese and US defense officials concluded the Taepodong-2 had targeted the waters near the US state of Hawaii in the Pacific Ocean, after analyzing data collected from their intelligence equipment. The newspaper quoted unidentified Japanese and US government officials.

It said the findings suggested the launch was a protest over US economic sanctions against North Korea. But Pentagon officials said the brief flight of the missile made it difficult to assess where it was aimed.

The Taepodong-2, North Korea's most advanced missile, has a range of up to 15,000 kilometers (9,300 miles) and is believed capable of reaching parts of the United States with a light payload. Hawaii is about 7,000 kilometers (4,350 miles) southwest of North Korea.

Japan, meanwhile, turned up the pressure on the impoverished communist state, announcing it would not provide food aid and may restrict agricultural and fisheries trade between the two sides. North Korea is dependent on international food shipments. North Korea retorted on Friday by threatening to take "stronger physical actions" if Japan continues its sanctions.

"Japan is translating its criticism against us into action," Song Il Ho, North Korea's ambassador in charge of diplomatic normalization talks with Japan, told Japanese reporters in Pyongyang, according to the Kyodo News agency. North Korea might be forced "to take stronger physical actions" unless Japan lifts its sanctions, Song added without clarifying what steps it might take. "I leave that to your imagination," he said.

Immediately after the launches, Japan banned entry of the only direct passenger ship between Japan and North Korea into the country for six months as one of the countermeasures.

Japan dismissed Pyongyang's threat Friday. "This is extremely regrettable and enraging," Japan's chief cabinet secretary, Shinzo Abe, said Friday. "North Korea should really think about who has caused the relations to become like this."

South Korea's Yonhap news agency on Friday quoted Choe Myong Nam, councilor at the North's mission to the UN in Geneva, as saying that the launches were successful and could be continued, echoing an earlier statement by North Korea's Foreign Ministry. "It's an unfair logic to say that somebody can do something and others cannot. The same logic applies to nuclear possession," Choe said. The missile launches are "not intended to strike anyone and it's the North's position that missile launches could be continued," he said.

The United States kept up its diplomatic drive to forge a common strategy among the main players in the region. On Thursday, it said the world must speak with one voice in pressing North Korea to abandon its nuclear weapons and return to multinational talks.

China, which provides oil and other economic assistance to North Korea, is seen as critical to diplomatic efforts with Pyongyang. The US has urged Beijing to pressure North Korea, but so far Chinese efforts have been largely limited to diplomatic appeals.

In Washington, President George W. Bush expressed support for a draft UN Security Council resolution, offered by Japan, to sanction North Korea for the launches. China and Russia have shown little interest in sanctions, saying diplomacy remains the only way to resolve the dispute.

"It's hard for me to tell you what's on his mind. He lives in a very closed society," marked by concentration camps and starving people, Bush said. "What we don't know are his intentions," Bush said.