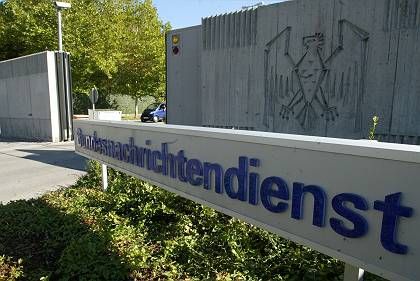 The date couldn't have been better suited for a pledge of principles. When Ernst Uhrlau, the head of Germany's foreign intelligence agency the Bundesnachrichtendienst (BND), got up to deliver a speech to mark its the 50th anniversary of in Berlin last Thursday, Chancellor Angela Merkel and Interior Minister Wolfgang Schäuble listened devoutly. "Transparency," the spymaster declared, was no longer an impossibility for intelligence services these days. The system of parliamentary checks on the BND ensured that the agency worked "within the framework of the law," he said. And as if the Almighty had arranged the choreography, a shaft of sunlight pierced the glass roof of the German Historical Museum and bathed its courtyard in bright midday light.

Uhrlau can only have been referring to the future when he made his pledge of loyalty, because on the evening before the ceremony, retired federal judge Gerhard Schäfer had presented a report to a secret meeting of parliamentary controllers that suggested exactly the opposite: the BND at times chooses not to obey law too rigorously when its hunger for knowledge became too intense.

The special investigator has described as clearly "unlawful" certain operations conducted by the agency, especially the surveillance since 1993 of various journalists in spying operations that in some cases went on for years and extended right into their private lives.

It now looks as if this "blatant scandal", as opposition liberal Free Democrats leader Guido Westerwelle has described it, may have consequences. Deputy government spokesman Thomas Steg referred to "dishonorable attempts at infiltration" which the government would "take action against" if the accusations should prove correct.

Another opposition MP, Greens member Hans-Christian Ströbele, described the surveillance affair as a "serious matter" which "touches the core of press freedom."

The parliamentary oversight committee, which monitors the activities of Germany's intelligence services, will hold a special session this week to discuss Judge Schäfer's report. The German Association of Journalists and the Association of Newspaper Publishers have demanded "a rigorous investigation."

Schäfer, acting at the request of the parliamentary control committee, spent half a year examining an occurrence that had already embarrassed the BND last October: at the time the BND's leadership had to admit that it spent years running compliant journalists as sources and gathering information about critical reporters.

But now new details about the modus operandi and scale of the BND's journalism program have come to light in Schäfer's 170 page report. The operation started in summer 1993 when author Erich Schmidt-Eenboom published a book containing inside information about the BND.

But contrary to statements made last fall by then-BND President August Hanning, the agency has until recently been interested in receiving information about and from journalists -- even last year it was running a member of staff at in a newsroom in western Germany under the cover name "Sommer."

Not until fall 2005, when the BND's alleged links with journalists had started coming to light, did the agency sever its contact. "Sommer" had for years been offering his services as a trustworthy partner to the intelligence agencies and even approached the chancellery in Berlin. Until now Hanning and his successor Uhrlau had only conceded old cases during the 1990s. Uhrlau insisted: "Using journalists as flycatchers isn't allowed."

The special investigator's report suggests that for a decade, things looked very different in practice. Wilhelm Dietl, who used to work for Munich news magazine Focus is said to have received 600,000 German marks (€307,000). He is also alleged to have served the BND under the cover name "Dali" between 1982 and 1998. Dietl, confronted by SPIEGEL at the end of 2005, spoke of "conversations on a mutual basis" and insisted that he "at no point had the order to investigate SPIEGEL.

Focus has parted company with him. In the 1990s Dietl also had contact with SPIEGEL and had a preliminary contract as member of staff but this was cancelled by SPIEGEL when initial indications of Dietl's proximity to the BND surfaced. According to intelligence agency sources, Dietl "was never regarded as a journalist, more as a news dealer" who mainly supplied information from the Middle East.

The BND appears to have had a burning interests in the work of SPIEGEL. The agency enlisted the help of various journalists to get inside information about the magazine's editorial operations, for example its uncovering of the BND's involvement in a plutonium smuggling operation in 1995.

When Hans Leyendecker, one of the two authors of SPIEGEL's plutonium story, left SPIEGEL in 1997, the BND got an informer from the media industry to tell the agency about the circumstances of his departure. The agency apparently also collected all the information it could about job contracts and severance payments. The documents contain the names of a handful of SPIEGEL reporters.

The BND had a second source at Focus, cited under the cover name "Kempinski" in documents. During several meetings with BND department head Volker Foertsch, "Kempinski" speculated about SPIEGEL's possible sources in the BND's upper echelons, according to reports of their meetings. Foertsch personally signed those reports, and distributed them round various BND departments. The editorial gossip was a residual product of "Kempinski," whose real value lay in his good contacts in the Eastern bloc, according to former BND agents. "Kempinski" himself says he appears to have been "siphoned off."

Judge Schäfer names half a dozen informants who served the agency, including one freelance journalist who has covered various crisis regions. That reporter was interesting to the BND because of his good contacts -- but he also reported back what he heard from Focus correspondent Josef Hufelschulte.

But Schäfer didn't completely condemn the BND's methods. He regards part of the agency's activities as legitimate, for example the surveillance of the Schmidt-Eenboom which lasted until 2003. The agency had a justified vital interest in seeking out moles in its own ranks, and should be allowed to do so by means of observation, according to Schäfer.

The agents didn't behave particularly cleverly in their surveillance of Schmidt-Eenboom, a secret service expert. Every Thursday night agents secretly picked up waste paper from the author's office in the hope of finding clues to his informers. But because the agents forgot to substitute the paper they'd removed, neighbors started wondering about the unscheduled garbage collections.

The government responded to the affair on Monday by banning the BND from using journalists as sources from now on. "The Chancellery today gave the instruction that no journalists must be run as sources in operations to protect itself," said government spokesman Ulrich Wilhelm.

Freedom of the press was so important that it outweighed the BND's interests in protecting itself, said Wilhelm. The announcement marked a change in the intelligences services' code of conduct which had until now stated that any operational measures against journalists required official permission from the BND's leadership.