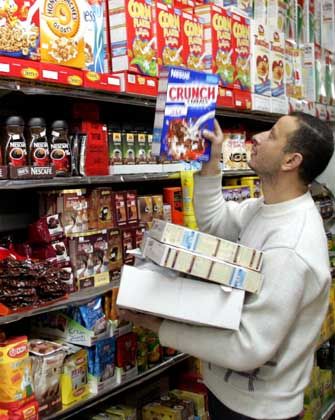 A Palestinian worker removes Nestle products at a shopping center taking part in a boycott on Feb. 2 in the West Bank. Nestle has since made a point of saying they are Swiss and not Danish.

Talk about a slow burn. Denmark's biggest-circulation broadsheet Jyllands-Posten may have sparked a worldwide controversy by publishing cartoons of Islam's prophet Muhammad last September, but the scope of the affair just continues to grow.

Protests this week spread from the Middle East all the way to the Philippines, often with violent, sometimes deadly results. Washington and Tehran also began trading barbs over the cause for the demonstrations, potentially escalating the conflict. But beyond the political and cultural fallout, the economic impact of offending Muslim sensibilities is also finally becoming apparent.

Whereas Denmark fears a widening boycott of Danish goods, European newspapers, it would seem, are profiting from increased circulations as readers rush to read about the controversy. Many European publications decided to publish the Muhammad cartoons in demonstration of solidarity with western ideals of free speech and a free press.

Whether out of simple curiosity to see the caricatures or part of a regular spike in interest in news, European readers have been rushing to their local kiosks to grab newspapers and going online to news Web sites. The Feb. 1 issue of France Soir which contained the drawings sold 40 percent more than the usual daily circulation, according to the Associated Press, and executives are hopeful that the newspaper's increased profile could translate into long-term gains.

"Over time, it could change the brand image of France Soir ... it shows we're capable of running scoops and leading a battle for freedom of the press," circulation director Philippe Soing told the AP.

But what has presented an opportunity for some publications has become a liability for others. On Thursday evening, the official Egyptian news agency MENA reported that Egyptian authorities were banning the current issues of German news magazines DER SPIEGEL and Focus, since they had reprinted some of the caricatures as part of their regular coverage of the affair.

And the editor from Jyllands-Posten responsible for the caricatures in the first place has been suspended over differences with the paper's head editors. Flemming Rose had announced this week he wanted to reprint potentially offensive Jewish and Christian caricatures. "We want to show we're not following some special anti-Islamic course," Rose told Danish television according the German news agency DPA. That led the paper to print a denial on the front page of its Thursday edition. Inside the paper, the editors explained they would not become equal-opportunity offenders: "JP will under no circumstances print Holocaust caricatures from an Iranian newspaper."

Away from the media sector, the decision by Nestlé, the Swiss food giant, and Carrefour, the French retailer, to distance themselves from Denmark has angered many Europeans who feel they are cravenly following economic interests. According to the New York Times, Danish industry estimates it has lost more than $55 million in sales in the Middle East since the furor began a week ago. Danish Prime Minister Anders Fogh Rasmussen told the Times that the moves by Nestlé and Carrefour were "disgraceful" and were offensive to all Danes.

Outspoken Islam critic and Dutch politician Ayaan Hirsi Ali was less diplomatic when visiting Berlin this week: "Shame on those European firms and companies that are now advertising in the Middle East with 'we aren't Danes' and 'we don't sell Danish products.' From now on Nestlé chocolate will never taste like it did before."