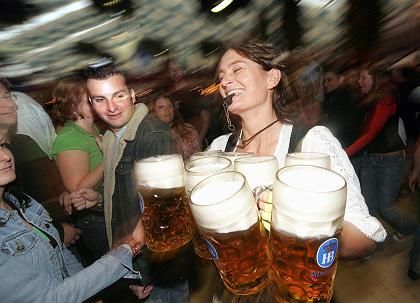 A waitress hauling "Mass" or one-liter glasses of beer during last year's Oktoberfest.

With its crowded tents, long wooden tables and staggering quantities of strong beer served in one liter glasses, the Munich Oktoberfest has always provided favorable conditions for flirting. But this year it's even easier. The organizers have decided to limit the volume of the Oompah bands to give guests more opportunity to talk in the 14 giant tents, and there's a new innovation that could allow strangers to break the ice that little bit faster.

A Munich company has come up with 16 different chat-up lines printed on cards that can be inserted into a sleeve one fits round one's beer glass or "Mass". The lines are printed in Bavarian German, normal German, English and Italian and include "Weers't imma scheena" which is Bavarian for "You are getting more and more beautiful."

Other lines on offer are the simple "Du g'foist ma," which means "I like you," and "Du bist liab" translated by the company as "You are a sweet little thing."

There is also "Host no was vor" ("What are your plans") , "Hogg Di her da" ("Please sit down here"), "Tragt's mi hoam" ("Please take me home"), and "I wui nur di" ("I only want you"). People who prefer to use their own favorites such as the classic, never-fail "Get your coat, you've pulled," can simply write it down and pop it in the sleeve.

"Often it's too loud to get the ball rolling, and many people prefer to avoid big words so this allows them to approach the object of their affections more quietly and discreetly," said Stefan Horvath, managing director of Wiesnflirt, the firm that developed the washable sleeve-based flirting system.

"We're planning to translate the lines into Japanese for next year," he said, adding that sales so far are better than expected.

If there's no one attractive sitting at or standing on one's table, no problem. The chat-up lines are big enough to be read from several tables away. Just hold up and point and wave your glass. The only risk is that the wrong person responds to it. 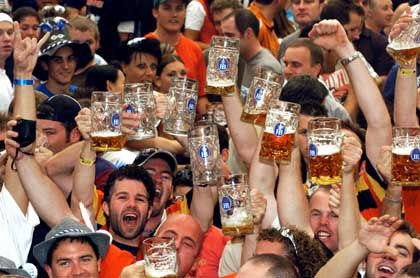 The Oktoberfest, which starts on Saturday Sept. 16 and runs until Oct. 3, is the biggest folk festival in the world. It had 6.1 million visitors last year, including hundreds of thousands of foreign tourists. They drank 6.1 million liters of beer brewed specially for the occasion by the city's six breweries.

The Oktoberfest is Bavaria at its most Bavarian. The new visitor may be taken aback by the sight of steaming tents packed with 10,000 people, many standing on the tables, the women in low-cut Dirndl dresses and the men stamping their Lederhosen-clad legs to the trumpet sounds of an Oompah band as they hold up their glasses in never-ending toasts.

Powerful waitresses, some of them capable of carrying eight full beer glasses, blow whistles or shout "Vorsicht!" ("Look Out!") as they barge their way through the crowds. Collisions are rare but messy, especially if they're bearing giant trays laden with pork knuckles and chicken. Brezels the size of steering wheels are also on offer.

Keeping the noise down

The drinking and partying has a decidedly medieval feel, but is organised with state-of-the-art technology and the usual Teutonic efficiency. Mobile phone jamming devices in the toilets prevent people from spending too much time there and ensure that the queues aren't too long.

And the Munich city authority, which organises the Oktoberfest, last year slapped noise restrictions on the bands and ordered them to play more sedate, folksy music because it was concerned that the festival was becoming too raucous and departing from its traditional roots. 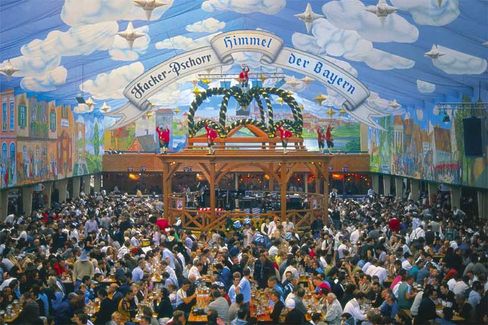 Bavarian Heaven: one of the 14 beer tents.

Before 6 p.m., loudspeaker systems keep the volume down to 85 decibels, about as loud as heavy traffic. Bands have been told not to play too many songs with thumping rhythms and sing-a-long refrains like Heyyy Baby, Mambo No.5 and "Living Next Door to Alice," which apparently get young people too fired up.

"We're going to have the same restrictions this year. They were very well received, people were pleased because it makes it easier to talk," said Gabriele Papke, spokeswoman for the city council. However, some visitors and tent managers complained last year that the limits were too restrictive and put a dampener on the party, especially at weekends.

The Oktoberfest dates back to the wedding in October 1810 of Bavarian Crown Prince Ludwig with Princess Therese of Saxony-Hildburghausen. The public festivities went on for five days and proved so popular they have been repeated each year since except in wartime and during two cholera epidemics.

The annual tally of lost items makes entertaining reading and testifies to the power of the amber nectar. Last year's list of 4,000 lost items included one wedding ring, a pair of false teeth, two crutches and a live wren. The year before, the abandoned arm of a shop window dummy had cleaners scratching their heads.