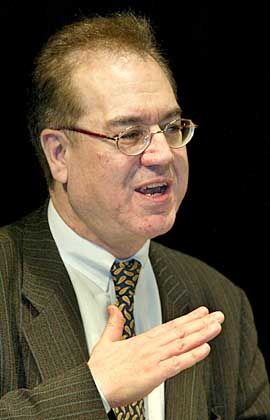 Professor Tibi, for the second time, a debate is raging in Germany about the term "Leitkultur" ("leading" or "guiding" culture), which you coined in the 90s. Most recently, German Interior Minister Otto Schily branded the term "moronic" and "an ancient relict." Does such an attitude anger you?

Tibi: It does amaze me. Recently, when an Italian translation of my book Islamische Zuwanderung -- die gescheiterte Integration (Islamic Immigration -- The Failed Integration) was presented in Rome in the presence of Mr. Schily, he expressed emphatic agreement with my ideas. The word Leitkultur wasn't used, but the book is about nothing other than Leitkultur. I thanked Mr. Schily afterward for agreeing with my concept. He would, of course, prefer a different term, but substance is the important thing in this discussion -- namely that there are democratic rules of the game and a democratic orientation -- Leitkultur in fact -- that all must adhere to.

SPIEGEL ONLINE: You spoke of a European Leitkultur. The (Conservative German opposition party) Christian Social Union is insisting on a German version. Is the difference meaningful?

Tibi: There is a huge difference. I have always emphasized how dangerous it is to talk about a specifically German Leitkultur. There are a number of reasons for this. First of all, the problem we are talking about here is a European problem. One only needs to look at the Netherlands and the murder of (Muslim-critical filmmaker) Theo van Gogh (three weeks ago) to see that. Thus, we also need a European value structure. Plus, any other approach would lead to a German "special path" and that is completely unadvisable. The important thing is: the line doesn't run between Europe and Islam, but between all open societies and their enemies. I myself am Muslim and I stand on the side of an open society. Democratic Muslims like myself can push for a European Leitkultur and against its enemies.

SPIEGEL ONLINE: You have always emphasized that only a secular society can assert itself against Islamists and secure a peaceful cohabitation. Are such thoughts completely alien to Muslims who live in Germany and Europe?

Tibi: French Muslims have set a good example in the last few years. The Grand Mufti of Marseille and the Imam from the mosque in Paris have professed that Islam is compatible with a secular state that separates religion from politics. My idea of a European Leitkultur is based on the foundation of a democratic community whose members are bound together through a collective identity as citizens of that community. Such a collective identity -- in the sense of the French Citoyenite (citizenship) -- stands above religious identity. Religion may, of course, be practiced privately, but in public only citizenship counts. Such a concept would unite Muslims with non-Muslims.

SPIEGEL ONLINE: What portion of the Muslims living in Germany do you think would be prepared to accept such a model?

Tibi: From the perspective of the current situation, the majority would likely refuse this idea. But we have to think long term. If we are able to wean the children of the third generation (of Muslim immigrants in Germany) away from the mosque-club culture, then it is possible to make them amenable to this concept of citizenship. That won't happen alone. First, one has to address the existent value conflict between secularity on the one hand and a religion-dominated society on the other. We have to win the hearts and souls of the Muslim youth.

SPIEGEL ONLINE: How do we do that?

Tibi: In the short term, we have to strengthen democracy's ability to defend itself -- security in other words. I agreed completely, for example, with Interior Minister Schily when he deported (the radical Muslim leader) Metin Kaplan, the "Caliph of Cologne." In the long run, we will have to depend on more education.

SPIEGEL ONLINE: Right now in Germany, you can hear from all sides that the multicultural society has failed. Do you agree? 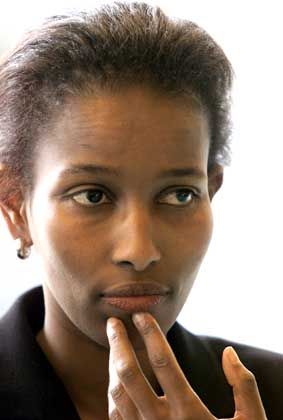 Tibi: It depends on what you mean by the term. In my understanding of multiculturalism means "anything goes." Multiculturalism means that one person can live according to (ultra-orthodox) Sharia law and the other according to the constitution -- and that actually has failed. Van Gogh's murder shows us that what we need instead is cooperation. The better concept would be cultural pluralism. Unlike multiculturalism, cultural pluralism doesn't just mean diversity but also togetherness -- primarily the understanding of the rules of the game -- the European values structure. For an illustration, take a look at the example of the Dutch politician Ayaan Hirsli Ali, who has also received death threats. She has said she doesn't want to be Muslim anymore. According to the European values structure, that is her right. But according to Islamic law that represents a renununciation of belief -- and she can be killed for it. A European Leitkultur doesn't permit that, whereas the Sharia does.

SPIEGEL ONLINE: You're currently teaching at Harvard University in the USA. What's the impression you get of the German integration debate from that far away?

Tibi: It's being carried out just as hysterically as it was during its first run four years ago. Why can't people just quietly reflect on the consequences of Van Gogh's murder? One problem is that hardly anybody is even bothering to define the terms used in the discussion. Claudia Roth, for example, the head of the German Green Party, says that she is against arbitrary values but at the same time supports a multicultural society. To me that's a contradiction. In other words: We need to search for some other concepts.

SPIEGEL ONLINE: What country can Germany look to as examples for new concepts?

Tibi: In Germany, it is possible to say a person is both a German citizen and Turkish, because our citizenship is (only) defined by a passport. That's different in France. The Leitkultur there is composed of the identity of the citizen, who participates in civil society, along with secularism. That's why in France you can also be a migrant and French. That's a model for Germany. We also need a citizen's identity and secularism. The concepts of Jihad and Sharia, on the other hand, need to be kept out of Europe.

SPIEGEL ONLINE: Who can be the dialogue partner inside the German Muslim community?

Tibi: The Center for Turkish Studies is, to me, an important representative of the Turkish diaspora in Germany and they also stand behind the idea of a European Islam. That's why it is a better dialogue partner than, for instance, the religious anti-integration organization Milli Gorus or the Islamic Council, which they dominate. As a Sunni Arab, I also don't feel represented by the Arab-oriented Central Council of Muslims. When Chancellor Gerhard Schroeder invited its chairman, Nadeem Elyas, to be the dialogue partner for our concerns after Sept. 11, I even wrote a protest letter. I never got an answer.