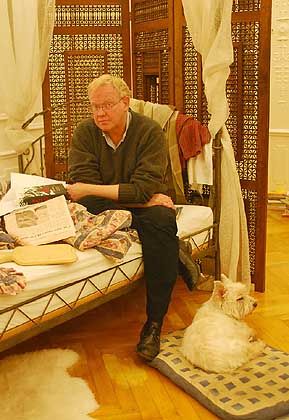 The Germans are a nation of paranoid schizophrenics who can't decide whether to love or loathe themselves, says Roger Boyes, the Berlin correspondent for the London Times, whose new book "My dear Krauts" marks the start of a one-man mission to help the country lighten up.

"One minute they're convinced they're total losers and start filling their pants. The next they're fervent patriots who think they know it all. It's completely confusing," says the veteran journalist, who began his career in Bonn in the 1970s and returned to Germany in 1993 after postings in Eastern Europe, the Balkans, and Italy.

The 2006 World Cup was a case in point, says Boyes, 54. "Weeks beforehand they were saying, 'Oh God we can't get anything right, ticket sales are going wrong, security is going wrong, no one's going to come.' Then the World Cup came and they went all patriotic and were suddenly saying no one does it better."

Boyes, who admits he has grown fond of the anguished country, has decided to help out by penning a decidedly tongue-in-cheek account of the idiosyncrasies of Teutonic life, told through a series of adventures that have befallen him over the years.

Such as being thrown out of a speed-dating session after reducing three women to tears with his mild brand of irony. Or giving Hitler's former waiter mouth-to-mouth resuscitation. Or learning how to cheat in the Berlin marathon: It's easy, just pay a student to run it for you and then wait for him in a portable lavatory near the finishing line. You only have to run 400 meters.

But amid all the anecdotes about his clashes with bureaucrats, Berlin taxi drivers, cyclists in spandex tights and World War II veterans, Boyes manages to find ample common ground between Germany and his native England: "Both have crap cuisine."

"I see myself as a development aid worker on German humor. Basically the Germans need all the help they can get. And I've decided to do my bit," says Boyes, interviewed amid piles of yellowing newspapers and the fading elegance of his Berlin apartment-come-office, which used to be a dance school.

"It's not that they can't be funny. In fact they like a good laugh. It's just that they're a bit slower on the uptake than the rest of the world. And they don't understand irony."

Despite the criticism, "My dear Krauts," which is first being published in German this week, is intended as a book of reconciliation. "It's me trying to make my peace with the Germans, and I think it can be done through humor," says Boyes, his 13-year-old West Highland Terrier Mac sitting contentedly by his side.

"It won't harm Anglo-German relations because the Germans like to be mocked and criticized. It's the masochistic element in their mentality." Does he have any concrete humor tips? "People here need to take humor exercises. They need to spend 10 minutes in front of the mirror every day and keep saying: 'I'm funny'. Then they need to grin and laugh out loud for two minutes. It might help. But I'm not optimistic."

The problem is that for Germans, humor is confined to certain events or times -- such as a comedy show on television or the week-long Rhineland carnival season, says Boyes. "Humor is in a ghetto. It's stockaded. But why can't it invade every part of life? Why can't wit be part of normal daily life?"

It sounds like he misses his native England, but he admits he is gradually developing German traits.

"You notice you're becoming more German when you go to England and things don't work. I was on the London Stansted Airport Express, which costs a bomb and is filthy. There was a Japanese passenger who sat down and his seat collapsed. Everyone laughed. I thought: Welcome to Britain. Collapsing chair, overpriced, laughing at foreigners, and all within 10 minutes of arriving."

Apart from clean trains, Boyes appreciates that Germans take friendship more seriously than the British, possibly because of the slower pace of life here. And it's safer. "The last time my neighbor was burgled was in 1964 and she told me that with a great air of warning."

On the downside, public debate in Germany is stifled by a collective need for consensus, says Boyes, who has grown tired of the nation's endless cycle of turgid TV talk shows, which usually focus on minor changes to the generous welfare system and seem to set the agenda. 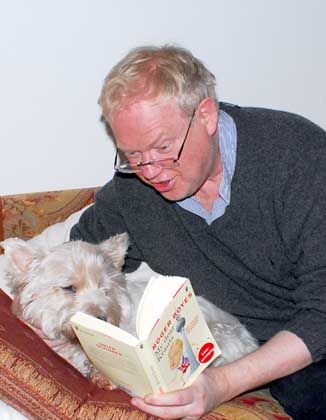 Dog-eared: Boyes loves nothing better than to read his new tome to his pooch.

And then there's the negative energy the nation exudes. "They had all the Turks cheering Germany during the World Cup, which may have been a starting point for a discussion about integration. Did they have that discussion? No. Instead they've spent the last few months returning to the anguished debate about immigration being a problem."

And what about the criticism that foreign journalists like him pounce on stories about the Nazi era and ignore what's really happening in Germany?

"It's true that the British are under-educated about Germany and that Nazi stories are the only ones that spark any kind of interest with newspaper editors in London.

"But it's the Germans who are obsessed with Nazi stories. DER SPIEGEL will know how much its circulation increases every time they put Hitler on the cover. Bild runs whole series on Göring's cooks or Hitler's ballpoint pens.

"It's a German problem and we pick up on it and reflect on it but the problem starts with Germany and not with Britain. Besides, I dont think there's anything wrong with being fascinated with the Nazi period. It was a uniquely evil period and I don't think there's anything unhealthy about reflecting what the roots of evil are."

Boyes admits it will take time for his humor campaign to take effect. But he's prepared to wait. "I'm an outsider in both countries now and if I'm condemned to being an outsider, I may as well live in a place where they've got cheap beer."