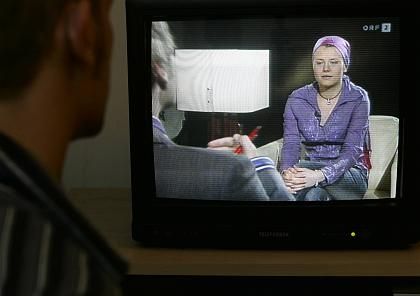 For years, Natascha Kampusch dreamed of escaping her captor. "At 15, or at some point," she said she dreamed "I would break out of my jail when I was strong enough." On August 23, she finally succeeded.

The 18-year-old girl offered details of her long ordeal in her first television interview, which was aired by Austrian public broadcaster ORF on Wednesday night.

Her escape last month came as her kidnapper Wolfgang Priklopil was making a mobile phone call and she used his inattention to flee from captivity in a tiny cell he built in his garage for eight years in the town of Strasshof near Vienna. "I knew at that moment that if I didn't do it then I might never have the chance again," she said.

More than 3,000 newspapers, magazines, TV stations and publishing companies requested interviews with Kampusch, but in the end she granted only a handful, including one given to public broadcaster ORF that was later aired in other European countries.

The questions journalist Christoph Feurstein was permitted to ask were significantly limited by Kampusch herself. In light of the "unique global media interest," her media advisor Dietmar Ecker said, she wanted to "protect herself from uncontrolled access to the media."

During the interview, Kampusch sat on an armchair in a studio room that had been decorated to look like a living room. She wore a purple blouse and a matching scarf to cover her hair. Throughout the interview, she appeared nervous -- as any young women conducting her first TV interview might be. And she also took care to express herself in a measured manner.

She spoke of "claustrophobic conditions," as she described the cell in which she had been held. They were the words of an adult, but accompanied by the fidgeting and gestures of a child.

"I thought he was going to kill me"

She also spoke of her first steps she has taken as a free woman, like a trip to a Vienna ice cream parlour while wearing a scarf and sunglasses. "We rode the subway and it was great to be able to smile at people without being recognized," she said. Her first encounter with her parents, she said, was a difficult one -- she felt "overwhelmed and a bit constrained."

When asked to describe the day she was kidnapped on March 2, 1998, she briefly lost composure, but quickly regained it. "He grabbed me. I wanted to scream, but nothing came out," she recalled, saying she sensed from the very beginning what was happening. "I just thought he was going to kill me," she said. Within hours of her kidnapping, she added, "I was already conscious of the fact that there was something wrong with this man, something missing, a deficiency." Describing her captor, she said he had lacked the kind of loving family he had. "He didn't have anything like that and he was also lacking in self-confidence."

For six months straight, she was kept in the cell and only later was she occasionally allowed to go up to the house to do housework. After two years, her captor allowed her to start listening to the radio, read the newspaper and later he would bring her Easter eggs and Christmas presents. "I think he had a very guilty conscience," she said.

He would also occasionally take her with him when he ran errands, but he always made her walk in front of him "so he could keep his eyes on me." At times she came close to freedom. While in a hardware store with Priklopil, a worker once asked if she needed any help. But her kidnapper quickly pulled her away.

"I couldn't confide in anyone because he always threatened he would do something to that person if I said something, that he would kill them. I couldn't risk that," she recalled.

In such situations, she says she always tried to recreate the smile in the photo of her as a happy young ten-year-old that went around the world after her kidnapping so that people might recognize her. But she never dared to flee. "A failed attempt would have meant that I would never be able to escape from my dungeon."

She didn't express any hatred towards her captor and even expressed sympathy for his mother. "I feel terribly sorry for Mrs. Priklopil. That her image of him is now destroyed. She lost her faith in the world on that day. And faith in her son. And her son, too." Just hours after Kampusch's escape, Priklopil committed suicide by jumping in front of a train.

She only indirectly spoke of her torment. "I was often hungry during my captivity," she said, "and I experienced the consequences of it -- circulation problems, troubles concentrating."

In the future, Kampusch said, she would like to go on a cruise with her mom, finish her high school education, maybe go to college and also work together with other people forced to suffer through similar crimes.

As for her family, she said the situation was "worse for them than it was for me. They thought I was dead."