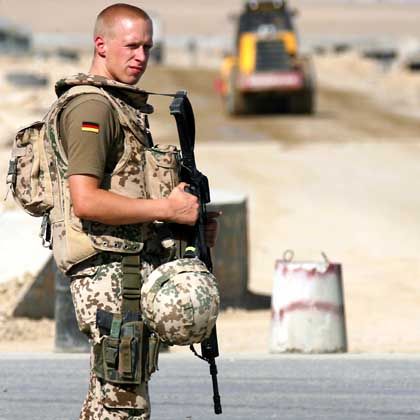 A German soldier stationed in Afghanistan.

If German diplomats are telling the truth, Tuesday evening's trip to the Riga opera house was a thoroughly pleasant affair. The heads of state of all 26 NATO countries were meeting in Latvia's capital. The summit's thorniest issue -- NATO's military mission in Afghanistan -- was negotiated during a working dinner. But there were no disagreements, at least according to German reports. "There were no accusations, no polemics. It was a very responsible discussion," German government sources said the following day.

This account of the meeting is surprising, at least at first sight. For weeks, a number of NATO partners -- led by the US, Great Britain, Canada and Denmark -- have conducted a genuine anti-German campaign. Germany has been repeatedly criticized for stationing its troops in the country's north, where they are accused of enjoying a kind of extended vacation, while others are risking their lives in the military skirmishes of the south. But Angela Merkel stood firm in the face of calls for sending German troops to the south. She refered again and again to the good work Germans are doing in the north.

Merkel's position didn't change fundamentally during the NATO summit in Riga. She was the third speaker at the dinner, after British Prime Minister Tony Blair and his Canadian counterpart Stephen Harper. Merkel made it more than clear "that we are well positioned with our mandate and that there is no reason to change that mandate," according to government sources. Merkel had already told NATO's Secretary General Jaap de Hoop Scheffer that Germany will not send additional troops to Afghanistan.

But it's not really surprising that no more angry accusations were made at the dinner. For one thing, it's a NATO tradition not have direct disagreements at summits. But what was more important in the case of the Riga summit is that Germany has changed certain details of its position, which were only apparent in the wording chosen by Merkel's spokespersons. For several days now, they have stopped talking about not "sending" German troops to the south and spoken instead of not "stationing" them there. They have also been emphasizing that Germany will of course help out "in emergency situations."

These phrases may not sound like much of a commitment, but their consequences could be far-reaching. Through its choice of words, Berlin is signaling that it no longer completely excludes the possibility of German troops being deployed in southern Afghanistan. The option now being explicitly rejected is that of permanently stationing German troops in Kandahar or other regions. The stated position used to be that German troops would be deployed only in the north of Afghanistan, but now the wording is looser. "The focal point of the German mission remains in the north," government sources say.

Berlin is also deliberately not spelling out the conditions for German troops providing emergency support. The details of Tuesday's pledge to provide such support remain entirely unclear. German officials artfully sidestepped queries as to whether it entails regularly sending German troops to the south for single missions conducted jointly with the USA or Canada.

Still, government sources emphasize that the help to be provided will consist mainly of making German jet planes available for logistical flights or providing infrastructure, such as radio communication technology.

The German pledge to help out in emergency situations satisfies most of the demands made by the other NATO countries. "We never wanted Germany to go into the south with several hundred men," says one US official. "We want them to help us when we need them." Most importantly, the NATO allies wanted a principal commitment from Germany, "a sign of solidarity." And the American is pleased with the sign that has been given. "Sometimes you have to pressure people to do what's in their own best interest," he believes.

The US delegation in Riga provided a somewhat clearer definition of what constitutes an "emergency situation" -- it is one "in which the lives of soldiers are in danger." Whenever a military commander feels this is the case, he can call on the troops of other countries to help. "Now that the pledge has been made in Riga, we'll hopefully also get the support," one US officer said. The statement allows for a variety of possible scenarios. After all, war is raging in southern Afghanistan -- and that obviously means the lives of soldiers are in danger. So requests for help could come at any time.

The German side was optimistic, pointing out that, in the past, Germany has always helped out when requested, and adding that things would be handled the same way in the future. "We'll evaluate every request to see if we can meet it with the troops available in the region," government sources said. Under no circumstances would the mission in northern Afghanistan be "jeopardized" by the emergency support, the sources added.

This statement contains another possible back door, since the German military only has a limited number of combat troops in Afghanistan.

So even if the open disagreement within NATO appears to have been settled, many questions remain. Only the practical decisions made in Afghanistan will show how Germany's NATO allies are going to deal with its pledge.