In the painting, the grande dame of impartiality embodies the unbiased rule of law: eyes bound, flowing robe, scale dangling from her left hand. But Carl Spitzweg's masterpiece "Fiat Justitia," which forms part of the German president's art collection, is anything but a symbol of justice -- quite the contrary.

The piece was sold at a cut-rate price by its Jewish owner in the mid-1930s to finance his escape attempt from Nazi Germany. Seven decades later, his descendants have still not been compensated for its loss.

But that may soon change. In recent years there have been growing efforts to find and compensate families of art collectors disappropriated by the Nazis during World War II. And an important new contribution to that project was revealed in Berlin Tuesday: a new book called "Nazi Looted Art: A Handbook to Art Restitution Worldwide" -- with Spitzweg's "Justitia" gracing the cover.

Over 500 pages long, the encyclopaedic tome is filled with case studies of valuable artworks either being taken from their owners by the Nazis, or sold at below-market prices to finance escapes. But more than that, the book provides a detailed, country-by-country look at the laws in place intended to help descendants get their art back -- in effect, an instruction manual for those dispossessed by the Nazis.

"This book gives the victims the possibility to take legal action without having to hire a lawyer," says Gunnar Schnabel, a Berlin property lawyer who co-authored the book with Monika Tatzkow, a Berlin historian who specializes in tracking down lost art.

"There have already been hundreds of pictures returned in recent years," he says. "But there are likely hundreds more in the basements of museums in Germany, Austria, the US and elsewhere."

The book appears at a time when high profile art restitutions have been grabbing more headlines than ever. In November last year, Ernst Ludwig Kirchner's "Berlin Street Scene" was auctioned off by Christie's for $38.5 million after Berlin's Brücke Museum had returned it to its rightful owners. 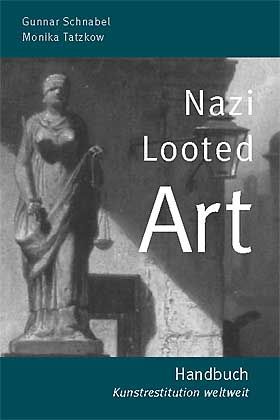 Also in 2006, five paintings by Gustav Klimt were returned to the descendents of his famous model Adele Bloch-Bauer, while last February hundreds of important old masters were handed back to the descendents of Dutch Jewish art dealer Jacques Goudstikker, who fled Amsterdam in May 1940 to escape advancing German troops.

Since the fall of the Berlin Wall and the opening up of Eastern Europe, it has become much easier to trace missing pieces that ended up in museums there after the war. The so-called Washington Principles, an agreement signed by 44 countries in 1998 on dealing with Nazi looted art, likewise gave restitution efforts a boost.

But even as some valuable pieces have found their way back to their rightful owners, many others continue to adorn the walls of museums around the world. German museums alone fear that up to 50 masterpieces -- including a Franz Marc in Stuttgart, another Kirchner in Essen and a painting by Iwan Puni in Berlin -- may soon vanish, leaving gaping holes in their collections.

Then there are the cases of "Fiat Justitia" and another work owned by the German state, Canalleto's "Zwingergraben," which hung until recently in the German president's Berlin residence, Schloss Bellevue.

"For me it is incredible that a president has a collection that is made up of works with an inhuman background turned over by US soldiers after World War II," said Schnabel on Tuesday. "And nothing happens," he added. "That is simply impossible to believe." The German government has begun looking into the provenance of the two works, however.

That many of the families now seeking restitution are Jewish is hardly surprising. Prior to World War II, a disproportionate number of art dealers and collectors were Jewish. Following the rise of the Nazis to power in 1933 and the passage of the Nuremberg Laws in 1935, many of them were forced to sell their art below market value -- at so-called "Jewish auctions" -- to raise money for their escape.

Leo Bendel, whose story is the first of the 109 case studies presented in the new book, is just one example of how the Nazis exploited collectors. Bendel was a small-time Berlin art collector who owned "Fiat Justitia" but sold the painting on June 15, 1937 to a gallery in Munich for 16,000 reichsmarks to finance his family's escape from Germany. Just nine months later, the painting was bought at the behest of Adolf Hitler for his planned megalo-museum in Linz for 25,000 reichsmarks -- a clear indication that Bendel's persecution by the Nazis was a factor in both the sale and the low price he received.

Bendel fled to Vienna where he was -- despite converting to Catholicism -- rounded up by the Nazis after Austria was annexed in 1938. He was deported to Buchenwald concentration camp where he died in the spring of 1940.

Other Jewish-owned collections were simply "Aryanized" -- essentially stolen -- by the Nazis in their quest to put together the world's biggest and best art collection. After the war, many of them were taken out of Germany by Allied soldiers (many works were mistakenly believed to be German state property) or otherwise sold abroad, and are now spread out in museums and private collections across the world.

Authors Schnabel and Tatzkow are hoping their book, with its detailed look at the legal framework each country has put in place to deal with the return of Nazi looted art, will make it easier for descendants to regain ownership of their family's works. It will also, no doubt, ratchet up the already growing pressure on German museums to conduct extensive research into their own works of art acquired since World War II.

Indeed, one of the central accusations of "Nazi Looted Art" -- which will appear in an English-language version some time in late spring or early summer -- is that Germany has not done enough to trace pieces taken by the Nazis. While the government has called on museums to check their collections in accordance with the Washington Principles, it has done little to help fund such research.

Museums themselves have likewise been reticent about handing over their prized pieces to descendants who often just turn around and sell them for a tidy profit. Martin Roth, general director of Dresden's Staatliche Kunstsammlung (State Art Collection), complained to the German weekly newspaper Die Zeit last summer that "lost art is currently being sought out and politicians are being pressured until they cave in," adding, "it's only about speculation and money." And with the art market booming, state museums are realizing that they can no longer compete for the most important works.

Such a position, Schnabel and Tatzkow made abundantly clear on Tuesday, is contemptible. The point is not how much money the descendants end up making from a sale. The point is the fates of collectors who were persecuted and often murdered by the Nazis -- and who lost all of their possessions along the way.

"We are primarily interested in what happened to the people and families who lost their property because they were seen as Jewish, half Jewish, a quarter Jewish, or otherwise an enemy of Nazi Germany," says Tatzkow.

"And my feeling that there will be a lot more cases in the future comes from the fact that I know Jewish collections well -- and know that there were paintings in those collections that have not yet been found and returned."

"Nazi Looted Art: Handbuch Kunstrestitution Weltweit" by Gunnar Schnabel and Monika Tatzkow, published by Proprietas-Verlag in Berlin, will be available in German in February for €39.80. The English edition is planned for June.