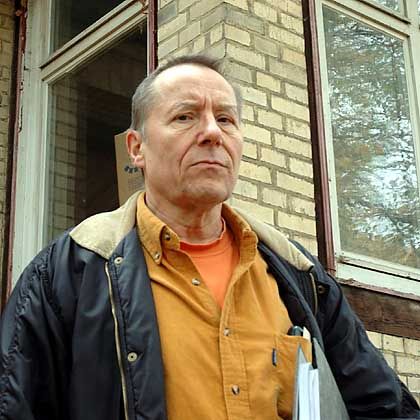 Guntram Weber, 63, found out his father was an SS major-general who escaped a death sentence for war crimes.

They were bred to be the elite of Hitler's 1,000-year Reich but ended up cowed by shame, alienation and uncertainty for decades.

Now aged over 60, the children of the Nazis' "Lebensborn" ("Spring of Life") program to create an Aryan master race are starting to go public with their plight and are renewing efforts to find out who their true parents were.

More than 30 Lebensborn children, by no means all of them tall and fair, met at the weekend in the sleepy eastern town of Wernigerode, site of one the program's birth clinics. The meeting was organized by a self-help group called "Traces of Life" which was set up last year to swap experiences, aid research and explode some of the myths surrounding the scheme.

Some 8,000 children were born in Germany and around 12,000 in Norway as part of Lebensborn, formed by SS leader Heinrich Himmler to encourage women of pure blood to bear blond, blue-eyed children.

Historians have refuted the publics perception that it was a system of Nazi stud farms where SS zealots mated with each other. But it was an integral part of a murderous racial policy that stretched from the forced sterilization of people with hereditary diseases to the killing of 6 million Jews.

Founded in 1935, Lebensborn was designed to halt the high rate of abortions in Germany which rose as high as 800,000 a year in the inter-war years because of a chronic shortage of men to marry after World War I. Its aim was to prevent 100,000 abortions and its statute stated that it was to support "racially and genetically valuable families with many children."

It enabled unmarried pregnant women to avoid social stigma by giving birth anonymously away from their homes, often under the pretext of needing a long-term recuperation. About 60 percent of Lebensborn mothers were unmarried. Lebensborn ran childrens homes and an adoption service if the mother didnt want to keep the child.

It even had its own registry office system to keep true identities secret. Most documents were burnt at the end of the war. That, together with the refusal of many Lebensborn mothers to tell their children about the program, has made it very difficult to find the truth. 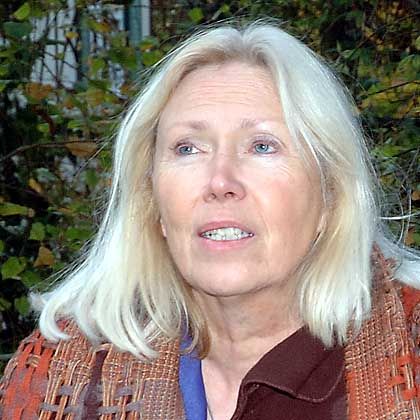 In many cases the fathers were married members of the SS who had obeyed Himmlers instruction to spread their Aryan seed even out of wedlock.

Gisela Heidenreich, born in a Lebensborn clinic in the Norwegian capital of Oslo in 1943, realized that there was something wrong when she was three or four years old and overheard people referring to her as the "SS bastard."

Her mother, a secretary for the Lebensborn program, had become pregnant after having an affair with a married SS officer, and had travelled from Bavaria to Oslo to give birth discreetly in a Lebensborn clinic. She refused to answer her daughter's questions about the father, and Gisela didn't find out who he was until she was an adult.

Her own reaction to locating her father has helped her understand why so many Germans lived with the crimes and cruelty of the Nazi regime, she said. "When I first met him it was on a station platform. I ran into his arms and all I thought was I've got a father," Heidenreich, strikingly tall with clear blue eyes and greying blond hair, told the Wernigerode meeting. "I accuse myself of shutting out who my father was. I never asked him what he did. My own reaction has helped me to understand how people in those days just put the blinders on and ignored the terrible things that were happening.

Hitler believed the Nordic race was destined to rule the world. But many Lebensborn children struggled through life yearning for the truth about their family history, wondering if their father was a war criminal, feeling inadequate and alienated from their foster parents or mothers, or ashamed of their illegitimacy and association with a murky Nazi project.

"My father the war criminal"

Guntram Weber, 63, a creative writing teacher from Berlin, knew for decades that his mother was lying about his father. His mistrust was so great that he would pore over history books looking for photos of soldiers that could be his father, or of women concentration camp guards that looked like his mother.

"My mother told me my father was a truck driver for the Luftwaffe who had never fired a gun and died in Croatia when he drove over a landmine. She told me she had married him in 1938 on a beautiful sunny day and that they had driven to church in a horse-drawn cart. She said she didn't want to say any more about him because it was too painful," said Weber. "But there were no documents and no photos. 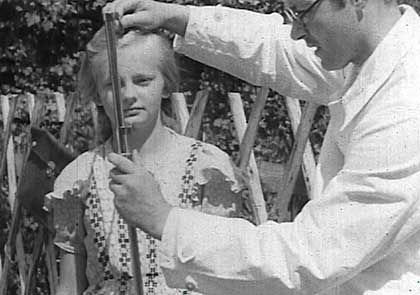 A girl getting her face measured: the Nazis wanted "racially and genetically valuable children."

Acting on a hint from his step-father, Weber started researching when he was 58 and found out that he was a Lebensborn child and that his father was an SS major-general convicted of war crimes and sentenced to death by a Polish court in 1949. He had escaped to South America and died peacefully in Argentina in 1970.

"From one day to the next I knew my father was a war criminal," said Weber, tall and quietly spoken.  He was a man who allowed himself everything. And the SS enabled him to live that way. I assume my mother fell in love with a powerful military man. And he obviously couldn't resist any woman. It gave me a feeling of low self-esteem, of loneliness, of uncertainty. But then I came to one of these meetings and found out that other Lebensborn children had gone through the same experience," he continued. "It was a huge relief for me, although I haven't been able to shake this feeling of inadequacy. Maybe in 10 years it will be gone. It's important that other children in Germany and abroad hear about this group because it could help them," said Weber.

There were 14 Lebensborn clinics in Germany and Austria, tucked away in small towns safe from Allied bombing, and nine in Norway where the Nazis had encouraged German soldiers to have children with women of Viking blood.

The childrens suffering was worst in Norway, where many never recovered from the stigma of having a German father. Some were put in mental asylums as Norwegians feared they spread German genes and create a hostile fifth column.

Clinics were also set up in France, Belgium, the Netherlands, Poland and Luxembourg.

The alienation has left many children missing the security and warmth of family ties. Volker Röder, 62, a Lebensborn child living in Berlin, said: I tumbled through life till I was 50 and met my wife.

Given up for adoption by his mother, he was taken from a Lebensborn home in 1945 by foster parents. They just wanted a kid to help them get through the Russian lines to the West, said Röder. The parents later handed him to another childrens home. In 2001, his wife encouraged him to travel to Wernigerode and find his real mother.

We immediately found out that she was living in an old folks home here. I went and the first thing she said was There you are. I've been waiting for you! I was speechless. I see her occasionally but she still wont talk about that time. I'm bitter and angry about it but my wife has helped me deal with it. At least I found out that my father wasnt a war criminal, that was a relief. He was a policeman and even joined the Social Democrat party in 1936, which was unusual.

The entry requirements for the Lebensborn clinics were as strict as for the SS itself. The women had to prove that both they and the father were of Aryan stock back to their grandparents. Modern equipment and qualified staff made the clinics popular with the pregnant wives of SS and Nazi officials as well.

The children were often christened in an SS ritual in which the SS dagger was held over them as the mother swore allegiance to Nazi ideology.

The Nazis offered incentives to German women to bear many children. Mothers with three and more children under 10 years old got "honorary cards" allowing them to jump shopping queues and get discounts on their rent payments. Cheap state loans were offered for parents, and there was the "Mother's Cross" medal: bronze for four children, silver for six and gold for eight.

It's common for the mothers of Lebensborn children to refuse to speak about the project. They build a wall of lies and then someone comes along and threatens to tear it down. It's almost life-threatening to them. That's why they don't talk, said Heidenreich, who wrote a book about her own search for the truth.

Many women swore the SS oath My honor is loyalty' which still seems to play a role in their lives. They'd rather die than say the truth.

Tired of hearing lies, many children stopped asking and got on with their lives. But now as pensioners, the curiosity has returned, and they can look back on their past with more detachment.

"As you get older you get more interested in your youth. Being a registered association gives us a better chance to get information from archives and authorities," said Peter Naumann, chairman of Traces of Life. "A lot of us have only recently started to try finding out about where we came from."

Heidenreich said she wanted to keep younger German generations aware of their past and combat recent regional election victories for neo-Nazis. "I'm appalled how pupils listen to Nazi history with incredible distance these days. They know a lot about it but it doesn't touch them emotionally. It's like ancient Rome to them," said Heidenreich.

"It's our duty to tell our stories."