A new exhibition in Germany opens up a subject that has long been taboo -- the use of female concentration camp inmates to provide sexual services to male slave laborers as production incentives during World War II. 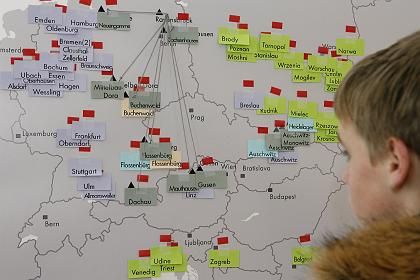 A visitor to the exhibition looks at a map showing the location of the Nazi brothels which were created in ten concentration camps.

"Hardly any other topic from the history of the concentration camps has, on the one hand, been kept so quiet and repressed and is, on the other hand, so tainted with prejudice and distortion, as the forced prostitution of female camp inmates for male camp inmates by the SS," commented Insa Eschebach, the director of the Ravensbrück Memorial Museum, at the opening of the exhibition.

Between 300 and 400 women were forced to become sex workers in brothels in ten concentration camps, including Auschwitz, Dachau, Buchenwald and Sachsenhausen. A visit to a brothel, known as a "special barrack," was part of a system of incentives intended to boost the productivity of concentration camp slave laborers. These bonuses were not, however, extended to every group of inmates -- Jews in particular were excluded. The idea for the forced prostitution came from Heinrich Himmler himself, as a letter from the SS leader on display in the exhibition shows.

Among the around 200 exhibits are index cards where the prisoners, who came mostly from the Ravensbrück concentration camp, are identified as "brothel women," documents about the bureaucratic organization of the sexual slavery, and audio recordings of male inmates talking about their visits to the brothels. Photos are on the whole not included in the exhibition "to avoid possible voyeuristic expectations," the spokesperson of the Foundation of Brandenburg Memorials, Horst Seferens explained.

Also on display are vouchers which male inmates received from the SS, entitling them to a visit to the brothels. "The brothels were supposed to function as an incentive to increase the productivity of the prisoners in the armaments industry," Seferens said. The sexual slavery was also intended to prevent homosexual behavior from spreading, something the SS leaders feared.

Hardly any of the women, who suffered severe physical and mental damage as a result of their experiences, applied after 1945 for compensation for their suffering because they felt talking about their experiences was too degrading, Eschebach said. "Sex slavery was not identified as such in the judicial cases dealing with the SS crimes," she added.

The exhibition, which runs until Sept. 30, is taking place at the Ravensbrück Memorial Museum in the former Ravensbrück concentration camp , located around 90 km (55 miles) north of Berlin. The camp was unusual it that it held mainly women inmates. Over 130,000 women and children from more than 40 countries were registered as prisoners there during World War II.