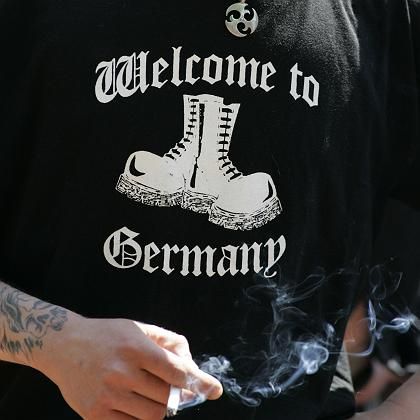 Once again, Germany is faced with rising right-wing violence.

Right-wing violence in Germany is rising. According to a report in the Berlin daily Tagesspiegel, there have been 20 percent more criminal offenses committed by neo-Nazis in the first eight months of 2006 than in the same period last year. Germany's federal law enforcement agency registered 8,000 criminal offences between January and August of this year, 452 of which were violent, according to the report.

This year's spike in right-wing offences only continues an already upward trend. The January through August period of 2005 saw 6,605 punishable acts, up from 5,127 in 2004. Most troubling, perhaps, is the increase in violent crime: the 452 cases logged in the first eight months of 2006 easily outpace the 363 recorded during the same span in 2005.

Government officials across parties are expressing alarm at the statistics, but have competing ideas on how to address the problem. Sebastian Edathy of the Social Democrats (SPD) has called for a "Democracy summit" to address the issue. Petra Pau, head of the Left Party, has proposed creating "an independent watch-dog on right-wing extremism." Wolfgang Bosbach of the conservative Christian Democrats (CDU) favors a combination of tough punishment for right-extremist criminals and strong political education.

Right-wing extremism has re-emerged as a major concern in Germany following major gains by the neo-Nazi National Democratic Party (NPD) in Mecklenburg West Pomerania's recent parliamentary elections where they carried 7.3 percent of the vote. Right wing parties now hold seats in three of Germany's state parliaments with the NPD having entered the Saxony parliament in 2004 and the German People's Union holding six seats in Brandenburg, the state which surrounds Berlin.

Rampant unemployment and socio-economic dislocation is commonly blamed for the NPD's success, but there is growing pressure not to dismiss the right-wing political advances as isolated flukes or protest votes. Charlotte Knobloch, leader of the Central Council of Jews in Germany, on Tuesday accused the country's politicians of having "a weak position" on how to address the problem.

Incidents of right-wing extremism are met with shock in Germany, but that has not made them easier to contain. Just last week, a 16-year-old boy was forced to wear an anti-Semitic sign at school, and there have been multiple incidents this year where dark-skinned soccer players have been tauntedwith racial slurs in the stadium.