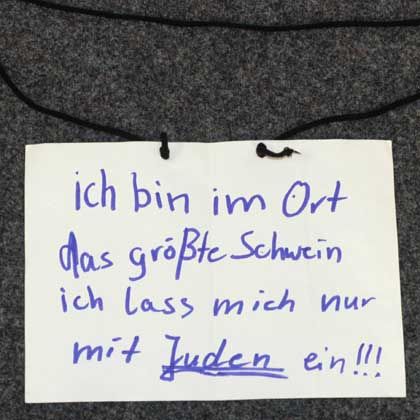 An eastern German teenager was forced to wear the sign, reading: "In this town I'm the biggest swine because of the Jewish friends of mine."

"Awful," Armin Friedrichs, chief of police for the Eastern German region of Jerichower Land, said on Thursday. "I've never seen anything like it in my whole life."

Friedrichs was referring to a shocking incident which took place in the schoolyard of a secondary school in Parey, a small town in the state of Saxony Anhalt. A 16-year-old pupil was seen parading around the yard with a sign hung around his neck. "In this town I'm the biggest swine / because of the Jewish friends of mine," ("Ich bin im Ort das grösste Schwein / ich lasse mich nur mit Juden ein") the sign read.

A teacher at the school noticed the incident and immediately called the police. Three youths, aged between 15 and 16, are being investigated for allegedly forcing the pupil to wear the sign. Charges of coercion may result, and prosecutors are investigating to determine whether further charges may apply. Investigators are also considering an alternative explanation involving the youth completing a test of courage.

The sign's message recalls Nazi-era Germany after Hitler and his party took over power in 1933 -- and particularly the 1935 Nuremberg racial purity laws, which prohibited Germans from having sexual relations with Jews. Women who slept with Jewish men were often forced to parade through town wearing signs bearing such slogans. A well-known picture of a woman wearing such a sign appears in German school books and may be the source for Thursday's incident.

"In this way, the NSDAP and SA publicly humiliated people after they took over power in 1933," said Saxony Anhalt's Interior Minister Holger Hövelmann. "It is appalling that adolescents in our country think that they can do such a thing today." The minister promised that the investigation would be thoroughly investigated.

The incident marks only the most recent racist episode in Eastern Germany this year. Last month, the African-German football player Gerald Asamoah, who has played for the German national team in the past, was the victim of racist insults at a game in Rostock. During the recent state election campaigns in Mecklenburg-Lower Pomerania and in Berlin, candidates from both the center-left Social Democrats and the center-right Christian Democrats were attacked by neo-Nazis. The neo-Nazi National Democratic Party of Germany (NPD) won 7.3 percent of the vote.

Also on Thursday, the right-extremist lawyer Jürgen Rieger was convicted of threatening a journalist and has to pay a penalty of €1,600. He told the journalist: "When the Heisenhof burns, you're going to burn too. I'm going to lay you on the grill and roast you slowly."

It's the second bit of bad news for Rieger this week. He had been trying to buy a hotel in the center Delmenhorst, a small town not far from Bremen, in order to establish a neo-Nazi training center. Last Thursday, however, the city came to an agreement with the current owner of the hotel. The city has agreed to pay €3 million for the property -- €400,000 less than Rieger was offering. The contract, however, has not yet been finalized.