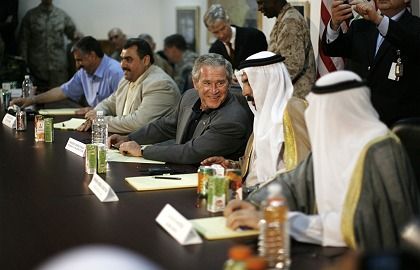 U.S. President George W. Bush meets with Iraqi tribal leaders during his unannounced visit to Al-Asad air base in Anbar province on Monday, in what some see as a new, decentralized strategy.

With the Democratic-led Congress poised to measure progress in Iraq by focusing on the central governments failure to perform, President Bush is proposing a new gauge, by focusing on new American alliances with the tribes and local groups that Washington once feared would tear the country apart.

That shift in emphasis was implicit in Mr. Bushs decision to bypass Baghdad on his eight-hour trip to Iraq, stopping instead in Anbar Province, once the heart of an anti-American Sunni insurgency. By meeting with tribal leaders who just a year ago were considered the enemy, and who now are fighting Al Qaeda in Mesopotamia, a president who has unveiled four or five strategies for winning over Iraqis  depending on how one counts  may now be on the cusp of yet another.

It is not clear whether the Democrats who control Congress will be in any mood to accept the changing measures. On Tuesday, there were contentious hearings over a Government Accountability Office report that, like last months National Intelligence Estimate, painted a bleak picture of Iraqs future.

It was the White House and the Iraqi government, not Congress, that first proposed the benchmarks for Iraq that are now producing failing grades, a provenance that raises questions about why the administration is declaring now that the governments performance is not the best measure of change.

But some of Mr. Bushs critics regard the change as something far more significant, saying they believe it amounts to a grudging acknowledgment by the White House of something these critics themselves have long asserted  that Iraq will never become the kind of cohesive, unified state that could be a democratic beacon for the Middle East.

They have come around to the inevitable, said Peter W. Galbraith, a former American diplomat whose 2006 book, The End of Iraq, argued that Mr. Bush was trying to rebuild a nation that never really existed, because Sunnis, Shiites and Kurds had never adopted a common Iraqi identity. He has finally recognized that fact, and is now trying to work with it, Mr. Galbraith said Tuesday.

Still, like the other strategies Mr. Bush has embraced, this one is fraught with risks.

There is no assurance that the willingness of Sunnis in Anbar to join in common cause with the United States against Al Qaeda in Mesopotamia can be replicated elsewhere in Iraq. And as reporters who have been embedded with units working to enlist the support of the Sunni sheiks have written, in vivid accounts from the scene, there are many reasons to question how sustained the Sunnis loyalty will be.

The sheiks and their followers have been barred from the Iraqi military, and it is unclear whether Mr. Malikis government will let large numbers of Sunnis sign up in the future. That creates the risk that the Sunni groups, once better trained and better armed, will ultimately turn on the central government or its patron, the American military.

Then there is the worry that, even if Mr. Bush is successful in working in promoting moderate Sunnis in Anbar and moderate Shiites in the south, the result will be exactly the kind of partitioned state  with all its potential for full-scale civil war  that the White House has long insisted must be avoided.

Those are real risks, and they explain in part why the strategy was not pursued before late in 2006, said Peter D. Feaver, a Duke University professor who, as a member of the National Security Council staff at the White House until he left this summer, was one of the architects of the New Way Forward, the plan Mr. Bush unveiled in January.

But the first principle we embraced in the new strategy is that Iraq is a mosaic, Mr. Feaver said, and that the risks of approaching it that way were deemed worth taking, given the alternative.

The White House insists that by flying into the tribal areas, Mr. Bush is not undercutting Mr. Maliki or cutting him loose. Instead, White House officials say that ever since his January speech, Mr. Bush has been pursuing a dual strategy, pressing for top down change from Baghdad as well as bottom up change from the provinces.

The current focus on the provinces, they say, reflects the fact that the White House overestimated what could be achieved by Mr. Maliki and his government, and underestimated the degree to which the local tribes developed a deep hatred for Al Qaeda in Mesopotamia, the homegrown Sunni Arab extremist group that American intelligence agencies have concluded is led by foreigners. The extent of its links to Osama bin Ladens network is not clear.

Its not that they love us Americans, said one senior administration official. Its that Al Qaeda was so heavy-handed, taking out Sunnis just because they were smoking a cigarette. In the end, that may be the best break weve gotten in a while.

As he flew from Iraq to Australia on Monday, Mr. Bush cast the Sunni leaders he had met in the deserts of Anbar in the most positive light possible.

They were profuse in their praise for America, he told reporters on Air Force One, according to a pool report. He said they had made the decision that they dont want to live under Al Qaeda, adding that they got sick of them.

Mr. Bush, of course, has had similar public praise for just about every Iraqi leader he has met, even a few leaders now disparaged by White House officials as unreliable, powerless or two-faced.

Mr. Bush himself has told associates that in the end, the Iraq experiment depends on whether Mr. Maliki and his aides are truly willing to share power, or whether they are determined to keep the Sunnis down.

For now, however, the White House is arguing that the ground-up relationships they are building in places like Anbar are more important than keeping a scorecard of legislation passed or stalled in Baghdad. Whether that argument is enough to keep a few wavering Republicans on board may determine whether Mr. Bush gets a bit more time to try his latest strategy.