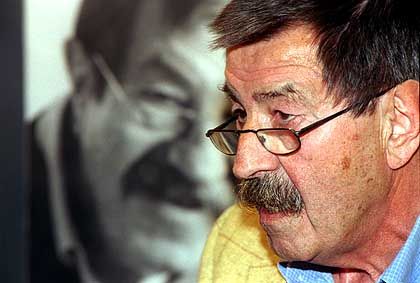 German Nobel Laureate Günter Grass: "For me, the whole thing was always tied to this question: Could you have realized what was going one at the time?"

Only a few weeks before the publication of his autobiography, German author Günter Grass has revealed something about himself that has long been a secret: He was a member of Hitler's Waffen SS in 1944 and 1945. In an interview with Frankfurter Allgemeine Zeitung, Grass owns up to his youthful naïveté and discusses the burden of this blemish on his past.

Grass's autobiography, due out in September, is called "Peeling the Onion." It unveils an explosive chapter in Günter Grass's life. Born in 1927 and winner of the 1999 Nobel Prize for Literature, Grass was also a member of the Waffen SS.

Grass talks about the issue in an interview appearing in tomorrow's edition of the Frankfurter Allgemeine Zeitung (FAZ), and in doing so makes a few corrections to the biographies that have been written to date about the author of "The Tin Drum" and many other works. Contrary to what was known about Grass in the past, he was not drafted in 1944 to serve in an anti-aircraft auxiliary unit. Instead, he was called up at the age of 17, when he was transferred from the Nazi labor service to the "Frundsberg" tank division, which was part of the Waffen SS.

When asked why he has taken so long to disclose his former membership in the SS, the writer responded: "It weighed heavily on my mind. My silence over all these years is one of the reasons I have written this book."

In the FAZ interview, the author says that although he volunteered for military service, "it was not for the Waffen SS, but for submarines, which was just as crazy." But the Nazis' submarine units had stopped accepting new recruits by then, whereas the Waffen SS, says Grass, was taking "whatever they could get" in 1944 and 1945, during the last few months of the war.

As the Nobel laureate recalls, "the fewer intact air fields there were, the more ground personnel was placed in army Waffen SS units. It was the same situation in the navy." At first, says Grass, he saw the Waffen SS as an elite unit, not as something "repulsive." It wasn't until later that he became plagued by feelings of guilt. "For me, the whole thing was always tied to this question: Could you have realized what was going on at the time?"

Grass says he always knew the day would come when he would have to talk about this part of his past. Did he miss the right opportunity to discuss his SS membership? "I don't know," says the author and poet. "It's certainly the case that I believed that what I did as a writer was enough. After all, I went through my learning process and reached my own conclusions. But there was still this lingering blemish."

More amusing than sensational is Grass's recollection of a boy named Joseph, with whom he spent time in a prisoner-of-war camp. When asked whether this 17-year-old was in fact the man who became Pope Benedict XVI, Grass says: "He became my friend and we played dice together. I had managed to smuggle my dice shaker into the camp. () I wanted to be an artist and he was interested in a career in the church. He seemed a little shy, but he was a nice guy."

Like Grass, Joseph Ratzinger, now Pope Benedict XVI, was in fact imprisoned at Germany's Bad Aibling camp. Whether the Vatican will comment on Grass's recollections remains to be seen.