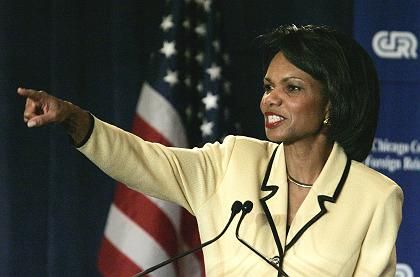 Pointing the way to diplomacy? US Secretary of State Condoleezza Rice has offered to join talks with Iran.

United States Secretary of State Condoleezza Rice said on Wednesday that Washington was prepared to drop its long-standing refusal to hold direct talks with Tehran in an attempt to persuade Iran to give up its nuclear ambitions. Washington severed all diplomatic ties with Iran and imposed sanctions in 1979 after Iranian students stormed the US Embassy in Tehran and held 63 hostages -- many for longer than a year.

But Iranian Foreign Minister Manouchehr Mottaki didn't show any signs on Thursday of Iran's willingness to accept the overture. Mottaki welcomed dialogue, but rebuffed any calls to suspend uranium enrichment as a precondition to any negotiations.

"We won't negotiate about the Iranian nation's natural nuclear rights but we are prepared, within a defined, just framework and without any discrimination, to hold a dialogue about common concerns," Mottaki said according to the Associated Press.

Rice said the United States was preparing a package of economic incentives with its European partners that would serve as the basis for any talks with Iran that could be Tehran's last chance to avoid sanctions. "We are agreed with our European partners on the essential elements of a package containing both benefits, if Iran makes the right choice, and costs, if it does not," Rice said.

Previous talks between Iran and the European troika of Britain, France and Germany were shelved last year. While Iran insists its nuclear work is peaceful and aimed at energy production, the West is concerned the country wants to build a nuclear bomb.

US President George Bush said on Wednesday evening that Washington was prepared to take a leading diplomatic role with Iran. "I thought it was important for the United States to take the lead along with our partners," Bush said. "Our message to the Iranians is that one, you won't have a weapon, and two, that you must verifiably suspend any programs at which point we will come to the negotiating table to work on a way forward."

The Bush administration believes Russia and China would support sanctions in the UN Security council if new talks fail to persuade Iran to permanently abandon nuclear efforts, a senior administration official told the Associated Press. In the past, Moscow and Beijing, which both wield a veto at the Security Council, have slowed the US push toward sanctions against Tehran since both countries have considerable commercial ties to Iran.

The foreign ministers of the five permanent Security Council members -- the United States, China, Russia, France and Britain -- plus Germany are meeting in Vienna on Thursday to try and forge a common position on Iran's nuclear program.

According to the AP, the resolution under consideration in Vienna calls for imposing sanctions under the UN Charter but it avoids any reference to a specific article that can trigger possible military action to enforce it.