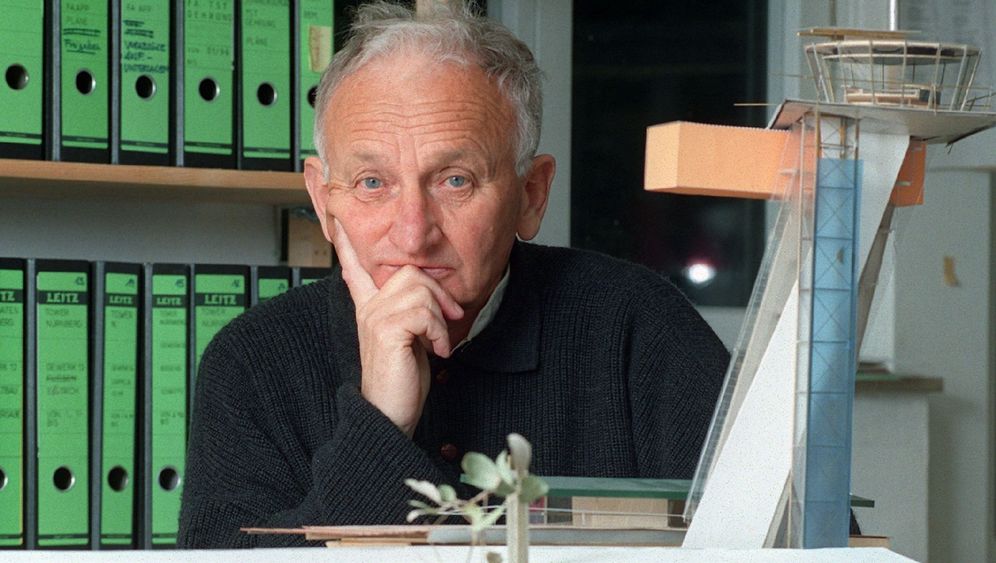 Doesn't every country, every state, have a kind of face with typical and completely individual features? And is the face of every country or state not also marked by the spirit and creativity of its citizens -- and its architects?

If one thinks of the face of France one might imagine the breathtaking nature of its landscape such as the Atlantic coast or the Mont Blanc, but one might also think of the Eiffel Tower or the Centre Pompidou in Paris. Britain evokes the white cliffs of Dover or the Scottish Highlands, but also Big Ben, the Tower of London and the Gherkin.

And non-Germans trying to picture the young Federal Republic, good old West Germany, might think of a gigantic structure designed by Günter Behnisch. The world gazed at Behnisch's work from August 26, 1972 with the opening of the Munich Olympic Games. The stadium he designed at the age of 50 was an icon -- not many architects achieve that. It was a modern temple of sport, but above all it was a perfect symbol for the new, democratic Germany.

The open, undulating tent roof that seems so light, so weightless, reaches well beyond the actual stadium. The magically woven, transparent carpet, 75,000 square metres in size, rests gently on the Olympic Park and sent a powerful message: A democratic, open country is welcoming the nations of the world. It was an attempt to distinguish West Germany from the bombastic architecture of the Nazi era when Berlin had hosted the 1936 Olympics.

Behnisch, who designed the Olympic park in Munich together with the architect Frei Otto and the landscape planner Günther Grzimek, always liked this flattering interpretation of his most important project.

He became an international star architect long before that job description became popular in the 1990s. It was an unlikely career path for Behnisch, who was born in 1922 in Lockwitz near Dresden and who became a U-boat commander under Hitler. "Going out to sea was a great thing for a young lad," he once recalled in an interview with weekly newspaper Die Zeit. He said he had only learned of the Nazis' crimes afterwards.

Behnisch took an interest in architecture when he picked up a book on the subject in a hotel in the Italian port of La Spezia. "It was about how you construct buildings. The war was over and I had to do something for a living," he recalled. He became a prisoner of war and the British released him in 1947. After that he studied architecture at the Technical University in Stuttgart. He opened an office in the city in 1952 and quickly gained kudos for designing school buildings and sports halls in the southwestern state of Baden-Württemberg.

His time spent in the claustrophobic confines of Hitler's submarines was often cited as a reason for his open, airy style of architecture with acres of glass. Nonsense, the master always retorted. "My love of light comes from 'Brothers, to the Sun, to the Freedom," the famous song of the labor movement, he told Die Zeit. Behnisch wasn't a party member but he admired Social Democrat Chancellor Willy Brandt, revered the Social Democratic intellectual Carlo Schmid and felt committed to the constitutional patriotism of philosopher Jürgen Habermas.

Given this spiritual connection with the men who forged the republican spirit of post-war German democracy, Behnisch was almost predestined to be awarded the coveted task of designing the new parliament in the West German capital, Bonn. Behnisch had won the architects' competion in 1973 but the project dragged on for half an eternity, as is common with politically hypersensitive projects. He only got the green light in 1987, for an altered version. In 1992 his parliament building was finally opened. But by then, history had overtaken Behnisch and his creation.

He wasn't happy with Germany's decision to move its capital from Bonn to Berlin at the end of the 1990s. It wasn't because he was offended that his parliament wouldn't be used for its intended purpose. Behnisch freely admitted that he could never really warm to Berlin, largely due to his personal heritage. "I'm a Saxon and we always fought the Prussians -- and always lost." That might have been meant in jest, but he was vexed by a different worry. He deeply disliked the new style of the Berlin republic, and of its architecture.

His attitude may have been colored by criticism of his last spectacular project -- the Berlin Akademie der Künste (Academy of the Arts) on Pariser Platz, the square in front of the Brandenburg Gate. The building was rightly criticized for design faults such as excessive noise and not enough space. Berlin's planning department officials had been horrified by his plan for a high-tech glass façade. A glass box like that right next to the majestic Adlon Hotel? Why not? said Behnisch the modernist. "I never even thought of putting a stone façade there. We didn't want to awaken any associations with the pretentiousness of the Hitler architecture and the Wilhelminian architecture."

The megalomania of the Nazi and imperial architecture was making a creeping comeback in the new capital, Behnisch feared. The Hotel Adlon, he said, was just a reconstruction of the old imperial pomp. And he couldn't believe Berlin wanted to rebuild the old imperial palace further up the street. He regarded these historical copies as the architecture of security that served a petit-bourgeois yearning for comfort at a time when bold new visions were needed. "If someone needs comfort, they should get a cat," he once said laconically.

Günter Behnisch died on Monday in his home in Stuttgart.