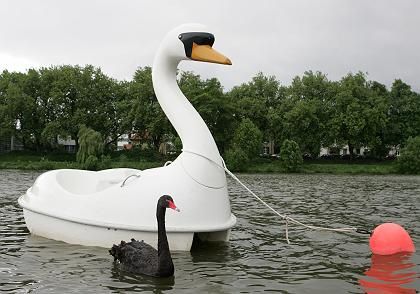 The couple together on Lake Aasee in Münster, western Germany.

A black swan that has fallen in love with a swan-shaped pedal boat on a German lake has been reunited with the object of its affections in a zoo for the winter.

The affair began in the spring when Petra the swan flew in and started following the boat around the lake in the western German city of Münster. With winter approaching, the boat had to be removed from the lake but the owner didn't have the heart to separate the two.

So both the boat and Petra were taken to a pond in Münster zoo for the winter. The project was financed by local residents for whom Petra has become a celebrity. She has seemed unperturbed by the journalists and TV crews who have been crowding into other less attractive boats and pedalling after the odd couple.

During the relocation, Petra followed her swan boat along a canal linking the lake with the zoo's pond. If the relationship survives the winter, both will be taken back to the lake. "What the swan wants, she gets," said the boat's owner Peter Overschmidt.

Wildlife experts hope she will lose interest in the boat when she gets to know the other black swans living in the pond. "There are four singles among them. So there's hope," said zookeeper Monika Ewering.