Brazen flappers with bobbed hair and strident lipstick, sassy secretaries and rebellious wives: The "new women" of the 1910s and 20s are back in Berlin and they are larger than life. As part of the Berlinale international film festival, a series of silent movies is paying tribute to the libertines who upturned gender conventions nearly a century ago. 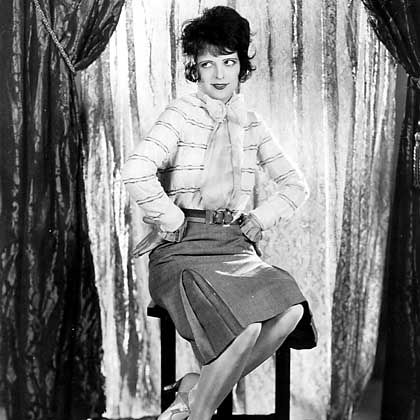 Titles like "Blind Husbands", "Love 'em and Leave 'em", "The Social Secretary" and "Madame Doesn't Want Children," speak for themselves. These films reflected a independent city girl, the product of far-reaching social reforms triggered by World War I. The new woman eked out a new role for herself, with her cigarette aflame and her face well-powdered.

Some 50 films are being shown as part of the Berlinale "City Girls" retrospective. Many of the movies feature icons like Louise Brooks, Greta Garbo and Clara Bow, but the series also includes more obscure pictures dug out of the archives especially for the festival.

Rainer Rother, director of the Berlinale's retrospectives section, said he watched two hundred movies before making the selection. While choosing the films, it soon became clear that the "new woman" was inseparable from her natural habitat, the city.

"These girls were suddenly everywhere in the cities, in anonymous metropolis streets, restaurants and cinemas. That had to be reflected by film," he told SPIEGEL ONLINE in an interview.

The black and white films were filmed, mostly, with women in mind: Film studios at the time couldn't afford to ignore the queues of independent young women, many of whom were earning their own money as typists, secretaries or factory workers. They had a voracious appetite for the big screen: In the 1920s women filled three out of every four American cinema seats.

"To appeal to this mostly female audience it became all important to reflect daily life or tell stories of relevance to the filmgoers," Rother said. "One solution was to forget about figures like the vamp and the diva which were strong women, but were not based on the reality of the 20s. Instead, they turned out films about the flapper."

The flappers, who strutted to Charleston, donned short skirts, and had what today would be called attitude, are well represented in the film series. Take one of the leading ladies of the "City Girls" series, Clara Bow. The starlet, famed for her off-set romances and colorful lifestyle, specialized in playing glamorous and uncompromising characters.

The original It Girl

Among the Clara Bow classics on show in Berlin is "It", made in 1927 when the actress was at the peak of her career. In the Cinderella-esque story, Bow plays a poor shop girl who uses her charms to lure a wealthy department store owner. Her magnetic performance earned her the moniker "The It Girl".

But the range of films at the Berlinale go beyond the It Girl stereotype. Many films showed a more-down-to-earth type of woman who was equally mould-breaking: The assertive and independent working girl.

In the British film, "Hindle Wakes", the young Estelle Brody plays a worker in a Lancashire cotton mill who goes on holiday with her boss for a week-long fling. Her parents find out and are morally affronted. They demand that the couple "do the right thing" and get married. But Estelle steadfastly refuses: She is determined to keep her independence  something unimaginable in films of earlier decades.

Another tale of a rebel is the 1925 American production "Dancing Mothers". Tired of staying at home while her husband and daughter go out night after night, a traditional housewife and mother dons her glad rags and hits the town. She ends up traveling abroad with the man her daughter loves.

The movies, about half of which are being shown in restored versions with many accompanied by live music, come from all over the world, including Europe, America, Japan and Russia. Rother said that despite strong parallels, different countries took contrasting approaches to the "city girl". British films - like "Hindle Wakes" - focused on working-class stories, often with grinding factory production lines as a backdrop. Unsurprisingly, films from the then Soviet Union also homed in on the working class girl. At the other end of the spectrum were American flicks, which were often glamorous comedies where cities were places of bright lights and heady consumption.

But despite the zesty nature of the "city girls" in the Berlinale films, many have traditional happy endings: The leading lady often finds (or ensnares) her man and settles down.

Instead of rewriting the rule book, Rother said many films were about renegotiating roles within the gender status quo. Take the Danish film, "Thou Shalt Honour Thy Wife" where a wife leaves her husband to educate him to help out at home. He obliges and she moves back.

The household power balance is also shaken up in "Why Change Your Wife" where a housewife, played by Gloria Swanson, enjoys the freedom she gets when her husband starts cheating on her. In his absence, she dons new clothes and revamps her image. By the end of the film, he has fallen for her again and has mended his ways.

But these celluloid portrayals of liberated wives, working girls and flappers found their freedom was short lived. A decade later and the clock was set back: Films made in the 30s and 40s returned to conventional and restrictive gender roles. In Germany, the Nazi era promoted a very conservative ideal of womankind while in Hollywood the Hays code fixed industry-wide guidelines to ensure traditional moral standards for movies. The cheeky new city girls vanished from the big screen - and stayed away for decades.

"Stories of divorce, love affairs and images of women smoking became out of bounds," Rother said. "In the 30s, 40s and 50s, films showed 'good little wives' and homemakers again."