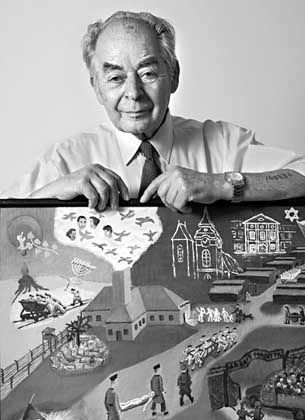 Oldrich Stransky was born in Brüx, in northern Bohemia, in 1921. He grew up in a Jewish Czech family. The Nazis deported him and his family to a series of concentration camps and his entire family was murdered. Despite the many difficulties involved, Stransky strives to promote Czech-German dialogue.

SPIEGEL: Were you even aware of your Jewish background growing up?

Stransky: Well, I grew up in a Jewish family in Brüx, later in Cesky Brod. It was clear enough. But my father didn't even register me or my brother in the Jewish community.

SPIEGEL: Was he himself a member?

Stransky: No, my father had already left the community. He had no religious confession. My father always said: You can look for a religion until you're smart. I'm still not smart enough today.

SPIEGEL: So it was the Nazi regime that forced a Jewish identity on you in the first place?

Stransky: Yes, you could say so. In the summer of 1941, the Nazis ordered the Prague Jewish Council to produce young Jewish men capable of work. The chairman of the Jewish community in Cesky Brod approached my father and said: You've got someone for us, don't you. And so I ended up in Lipa, in a so-called re-education camp. But it was really a farmhouse where foodstuffs for the SS were produced. I was supposed to stay for three months. But the day I said goodbye to my parents and my brothers was the last time I ever saw my family.

SPIEGEL: Do you know when and where the Nazis killed your parents and your brother?

Stransky: They were taken from Theresienstadt to Majdanek in July of 1942. My mother went straight into the gas chamber. My father and my brother were worked to death doing roadwork.

SPIEGEL: So you yourself stayed in Lipa for more than three months.

Stransky: Yes. Luckily, one could almost say. Because I was doing relatively well there, there was enough to eat. I was sent to Theresienstadt only two years later, in September of 1943.

SPIEGEL: Conditions there were much worse.

Stransky: Yes. Unfortunately, that's not made sufficiently clear in the exhibition on display there today. Far too much emphasis is placed on reminding people of the cultural attractions on offer there -- theater, music, and so on. But what happened to old people in Theresienstadt -- and to children and handicapped people as well -- is hardly shown. Thousands died in front of our eyes. The food was bad, hygienic conditions were poor. Really, all that was terrible.

SPIEGEL: Did you know it would get worse when you were told you would be taken to Auschwitz?

Stransky: No. You know, I was 22. When someone is young, he tells himself: No matter where they take me, there's no need to be afraid. I can work. I'm healthy, after all.

SPIEGEL: When did you realize that doesn't hold true for Auschwitz?

Stransky: When I arrived at the train station there -- right away. The people from the SS beat us onto trucks and took us to Birkenau. Back then, in December of 1943, the ramp in Birkenau didn't exist yet. I painted the scene. (Stransky points at his painting.)

SPIEGEL: When did you paint the picture?

Stransky: Only in 1989. I've always drawn, ever since I returned from the concentration camp. I just drew for my own pleasure, with a pencil. But then I took part in a painting course. I wanted to record the decisive scenes in Auschwitz -- the gate featuring the words "Arbeit Macht Frei" over here, the working detainees over there, and the SS over there.

SPIEGEL: And when did you realize the SS was gassing people in Auschwitz?

Stransky: Look, when we drove into the camp on the truck, we saw barbed wire fences on both sides, towers with SS guards and searchlights that fully illuminated the camp -- all that was hardly normal. And when we went into the barracks and re-encountered the people we knew from Theresienstadt, we saw the difference: How miserable they looked, how their condition had deteriorated. In the end I met my old friend Franta Piritz. He had been in Auschwitz three months longer than I had. And he knew about the gas chambers, of course.

SPIEGEL: What did you yourself do in Auschwitz?

Stransky: I did roadwork. It was terrible. There was mud everywhere. We transported the rocks in a cart. You can see it up there on the painting, in the left corner. We worked 10, 12 hours a day, no matter what the weather was like. And we were very badly dressed. But I was lucky there too. On the day after our arrival, we had to hand over all our clothes and were given new ones. And when I reached into the side pocket of my new jacket, I found two bills: $120!

SPIEGEL: The previous owner had forgotten them?

Stransky: He was probably sent into the gas chamber. The jacket also contained a label from Amsterdam. It probably belonged to a Dutch Jew. In any case you could get many, many cigarettes for that money. They were the secret currency in the camp. You could trade five cigarettes for soup or a slice of bread.

SPIEGEL: When was the concentration camp number tattooed on your arm?

Stransky: When we had to undress completely. There were some Polish detainees who shaved us -- our heads, our whole bodies, everything. Then came the number. Many tried to wash it off somehow. But I thought: If I survive, I don't have to be ashamed, and if I don't, it doesn't matter anyway. But there were times -- later, in the 1950s -- when the communists here staged anti-Semitic show trials. At that time, I only wore long sleeves, just to be safe.