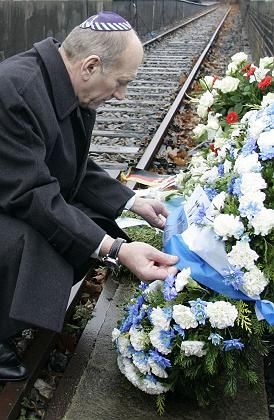 Even as Israeli Prime Minister Ehud Olmert does his best to convince the world that he didn't actually admit his country's possession of nuclear weapons in remarks this week, scepticism is widespread. Indeed, Finnish Defense Minister Seppo Kääriäinen is now demanding that the Israeli leader clarify what, exactly, he was getting at.

"I think that Mr. Olmert has to provide a more detailed explanation of what this information in fact means," Kääriäinen told the German daily Berliner Zeitung. He said the EU will closely observe what effect Olmert's comments have on the Middle East and hopes that "the international crisis management, which began in the summer in Lebanon, can carry on without limitations."

Olmert's comments largely overshadowed his two-day visit to Berlin, which ended Tuesday. His primary goal was to consult with German Chancellor Angela Merkel about how best to confront Iran's intractability in the ongoing dispute over its nuclear program. A number of other issues in the Middle East, including Syria's ongoing role in Lebanon and the long-stalled Arab-Israeli peace process, were likewise on the agenda.

But it was an interview he granted to a German television station before he even left Jerusalem which proved the defining issue of his visit. In a reference to remarks made by Iranian President Mahmoud Ahmadinejad earlier this year, he said, "Iran openly, explicitly and publicly threatens to wipe Israel off the map. Can you say that this is the same level, when they are aspiring to have nuclear weapons as America, France, Israel, Russia?"

Israel's official position has long been that of ambiguity -- when asked, the response has always been "Israel will not be the first country that introduces nuclear weapons to the Middle East." Indeed, since the fateful interview, which began making headlines on Monday, Olmert and a number of other members of his government have been repeating this formulation ad infinitum.

The EU response, though, seems to indicate that it may be difficult for Israel to stuff the nuclear genie back into the bottle. And the EU isn't the only one concerned about Olmert's utterance. Politicians back home in Jerusalem spent the last two days alternately calling for Olmert's resignation and fretting about what outcome the blunder could have on the international community's attempts to prevent Iran from going nuclear.

Indeed, a number of voices from the Middle East have already accused the US and the West of a double standard: ignoring Israel's presumed possession of nuclear weapons while confronting Iran about its apparent desire to obtain them.

Despite Olmert's verbal trip-up, he and Merkel were able to present a united front during his visit to Berlin. The two agreed on virtually every point they discussed, including tough talk on both Iran and Syria. Their only difference was over whether a military option should be a possibility when it comes to Iran. Olmert said yes, but emphasized that he hoped it wouldn't be necessary.

Merkel, for her part, said "for me, a military option is not on the table. It is all the more important for me that we explore every possibility -- from offers to sanctions -- to truly exhaust the diplomatic possibilities for a solution."

Olmert reinforced his hard-line position on Iran during a visit to a Holocaust memorial at Berlin's Grunewald train station -- the starting point for tens of thousands of Berlin Jews who were deported to Nazi concentration and death camps during World War II. "Doomed are they who do not believe those who threaten to eradicate them," he said.

And true to form, Ahmadinejad on Tuesday gave the West no indication that he was prepared to enter the diplomatic mainstream of world leaders any time soon. Speaking at a so-called "Holocaust Conference" hosted by Iran in Tehran -- which seems to be little more than a gathering of some of the world's best-known Holocaust deniers and pseudo-historians -- Ahmadinejad said that he expects Israel will soon be wiped out.

"Thanks to people's wishes and God's will, the trend for the existence of the Zionist regime is downwards and this is what God has promised and what all nations want," he said to warm applause from the assembled Holocaust doubters. "Just as the Soviet Union was wiped out and today does not exist, so will the Zionist regime soon be wiped out."