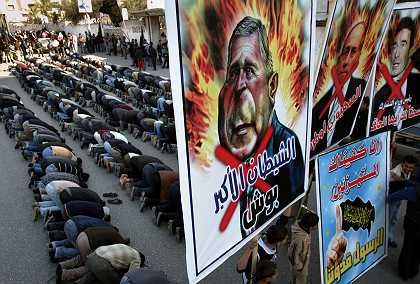 Ibn Warraq: "How can we expect immigrants to integrate into western society when they are at the same time being taught that the west is decadent, a den of iniquity, the source of all evil, racist, imperialist and to be despised?"

The great British philosopher John Stuart Mill wrote in On Liberty, "Strange it is, that men should admit the validity of the arguments for free discussion, but object to their being 'pushed to an extreme'; not seeing that unless the reasons are good for an extreme case, they are not good for any case."

The cartoons in the Danish newspaper Jyllands-Posten raise the most important question of our times: freedom of expression. Are we in the west going to cave into pressure from societies with a medieval mindset, or are we going to defend our most precious freedom -- freedom of expression, a freedom for which thousands of people sacrificed their lives?

A democracy cannot survive long without freedom of expression, the freedom to argue, to dissent, even to insult and offend. It is a freedom sorely lacking in the Islamic world, and without it Islam will remain unassailed in its dogmatic, fanatical, medieval fortress; ossified, totalitarian and intolerant. Without this fundamental freedom, Islam will continue to stifle thought, human rights, individuality; originality and truth.

Unless, we show some solidarity, unashamed, noisy, public solidarity with the Danish cartoonists, then the forces that are trying to impose on the Free West a totalitarian ideology will have won; the Islamization of Europe will have begun in earnest. Do not apologize.

This raises another more general problem: the inability of the West to defend itself intellectually and culturally. Be proud, do not apologize. Do we have to go on apologizing for the sins our fathers? Do we still have to apologize, for example, for the British Empire, when, in fact, the British presence in India led to the Indian Renaissance, resulted in famine relief, railways, roads and irrigation schemes, eradication of cholera, the civil service, the establishment of a universal educational system where none existed before, the institution of elected parliamentary democracy and the rule of law? What of the British architecture of Bombay and Calcutta? The British even gave back to the Indians their own past: it was European scholarship, archaeology and research that uncovered the greatness that was India; it was British government that did its best to save and conserve the monuments that were a witness to that past glory. British Imperialism preserved where earlier Islamic Imperialism destroyed thousands of Hindu temples.

On the world stage, should we really apologize for Dante, Shakespeare, and Goethe? Mozart, Beethoven and Bach? Rembrandt, Vermeer,  Van Gogh, Breughel, Ter Borch? Galileo, Huygens, Copernicus, Newton and
Darwin? Penicillin and computers? The Olympic Games and Football? Human rights and parliamentary democracy? The west is the source of the liberating ideas of individual liberty, political democracy, the rule of law, human rights and cultural freedom. It is the west that has raised the status of women, fought against slavery, defended freedom of enquiry, expression and conscience. No, the west needs no lectures on the superior virtue of societies who keep their women in subjection, cut off their clitorises, stone them to death for alleged adultery, throw acid on their faces, or deny the human rights of those considered to belong to lower castes.

How can we expect immigrants to integrate into western society when they are at the same time being taught that the west is decadent, a den of iniquity, the source of all evil, racist, imperialist and to be despised? Why should they, in the words of the African-American writer James Baldwin, want to integrate into a sinking ship? Why do they all want to immigrate to the west and not Saudi Arabia? They should be taught about the centuries of struggle that resulted in the freedoms that they and everyone else for that matter, cherish, enjoy, and avail themselves of; of the individuals and groups who fought for these freedoms and who are despised and forgotten today; the freedoms that the much of the rest of world envies, admires and tries to emulate." When the Chinese students cried and died for democracy in Tiananmen Square (in 1989) , they brought with them not representations of Confucius or Buddha but a model of the Statue of Liberty."

Freedom of expression is our western heritage and we must defend it or it will die from totalitarian attacks. It is also much needed in the Islamic world. By defending our values, we are teaching the Islamic world a valuable lesson, we are helping them by submitting their cherished traditions to Enlightenment values.