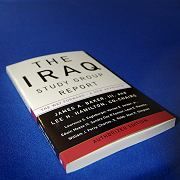 The report has arrived. Now what?

In Iraq, nothing goes without the support of the Shiites. And among the Shiites, little happens without the support of Abdul-Aziz al-Hakim, the head of the Supreme Council for the Islamic Revolution in Iraq, also known as SCIRI. Al-Hakim, who wears the black turban reserved for those who are a direct descendent of the Prophet Muhammad, is a proud and difficult man -- and one who doesn't like to be told what to do by anyone, least of all by the president of the United States.

Al-Hakim, though, is in the United States these days, at the invitation of President George W. Bush himself. With the final report of the Iraq Study Group out on Wednesday, al-Hakim too is expected to give the White House a bit of advice where Iraq is concerned. The Bush Administration, after all, has run up against a wall.

The Shiite leader, though, is far from an obvious ally for a president who sought to establish a flourishing democracy in the Middle East. His party's military wing, the Badr Corps, is suspected of being behind numerous killings and kidnappings of Sunnis in Iraq, as well as of killing Iraqi intelligence officers on behalf of Iran -- all of which al-Hakim has vociferously denied. His SCIRI, though, has an amicable relationship with Iran. Indeed, an Iraq dominated by al-Hakim would be the dream of Iranian President Mahmoud Ahmadinejad.

Nevertheless, the American president was polite when he welcomed his black-turbaned guest into the White House. In his remarks following his meeting with al-Hakim, he said: Part of unifying Iraq is for the elected leaders and society leaders to reject the extremists that are trying to stop the advance of this young democracy. I appreciated very much his eminence's strong position against the murder of innocent life."

The daily trail of blood

George W. Bush is doing his best these days to prop up the fragile organization that passes for a government in Baghdad. But his task has become even trickier ever since the public learned of a White House memo that describes what the Bush Administration really thinks of Iraqi Prime Minister Nuri al-Maliki: namely that he is weak, isolated and powerless.

Worse yet, this evaluation appeared in the New York Timeslast week just as Bush was set to meet with al-Maliki in Amman, Jordan. Bush unabashedly called Maliki "a great guy." He then warned him against having anything to do with Muqtada al-Sadr, the Shiite strongman who spills Iraqi blood on an almost daily basis.

The list goes on. Soon, Bush will meet with the Iraqi Vice President Tariq al-Hashimi, the Sunni general secretary of the Iraqi Islamic Party. Al-Hashimi recently lost his sister -- shot in a car in the middle of Baghdad -- to the escalating sectarian violence in Iraq. Violence that the Americans do not want to call civil war. The Sunni leadership know that it is a conflict the Shiites will win.

Likely not the only winners though. The Iraqi President is a Kurd, Jalal Talabani. Northern Iraq, where most Kurds live, remains relatively peaceful, but it hasn't always been so. Talabani has lived through a Kurdish civil war, gas attacks visited upon his people by former dictator Saddam Hussein, and the recent assassination of his own cousin.

Talabani has also fraternized with Iran and the Syrians while they were still enemies of the Saddam regime and been a friend of the Americans ever since they saw to a regime change and protected the Kurds in the North. Talabani, though, still maintains his ties to Iran and recently travelled to Tehran for a meeting with Ahmadinejad.

Such is the cast of characters in Iraq and thereabouts. All are difficult. All are particular. All have special interests. None are very amenable. And they are all waiting to see what the superpower's new foreign policy will bring, how fast and how hard the President will flip the switch.

He has to do it, he has no other choice. We are now witnessing a historical rarity: a general reckoning with a foreign policy that led to fiasco is taking place, and the very president who caused the fiasco is conducting the reckoning -- a self-humiliation of the highest degree. It is a form of self-impeachment, with the added bonus that the president is allowed stay in office.

Preparing for the inevitable

The commission, named after its co-chairmen Lee Hamilton (Democrat, 74) and James Baker (Republican, 76), has cautiously leaked the gist of its findings. Very cleverly in fact: prepare the audience for the inevitable, and accustom it to change before it comes. The president, it must be said, is part of that audience.

And an era -- that of American unilateralism -- is over. If the commission has its way  and it undoubtedly will  then there will be an international conference on the situation in the Middle East. That includes talks between America and two countries that have so far remained taboo: Syria and Iran. Syria has at least two faces: that of Bashar al-Assad, the eye doctor with former residence in London who knows how the West thinks and maybe even thinks like the West himself; and that of the old regime, which thinks the loss of its sphere of influence in Lebanon would be an egregious mistake and diligently grants its full praise to al-Qaida, Hezbollah and Hamas. It wouldn't be bad if it finally came to light, which of Syria's faces is the real face.

The era of allowing the Israeli-Palestinian conflict to drag on is also over. Israel quickly made up for America's mistakes in Iraq with its invasion of Lebanon. The little king of Jordan recently remarked that without some special efforts to contain the conflicts in the region, then the world could soon be dealing with three wars there: Iraq, Lebanon and Israel.

And it is the end of the era of "we-are-not-leaving-Iraq-as-long-as-the-Iraqis-don't-want-us-to" rhetoric. There will be a phased retreat and a phased reduction of troops. The commission's package deal is almost as ingenious as it is treacherous: If the Iraqi government manages, slowly but surely, to put an end to the insurgency and the bloodletting on its own, then US troops will gradually pull out. If, on the other hand, there is no end to the murders and assassinations -- if the government proves helpless in the face of the growing civil war -- then the US will pull out sooner. There is no room for sentimentality anymore.

None of this will be easy. Neither Egypt nor Saudi Arabia will take kindly to a conference that elevates Iran to the level of a regional force in the Middle East. Al-Hakim also announced in Washington that he rejects meddling from the outside. And it is not hard to imagine what Israel thinks of being drawn into negotiations it doesn't want to conduct. Perhaps Syria will be happiest with the conference, since it might bring the country out of isolation.

And what about America? Its influence in the Middle East has likely never been as low as it is today. Bush can do his successor a favor and clean up this mess as much as he can, but that requires abandoning the preconditions for negotiations, which in the case of Syria as well as Iran were preconditions aimed at avoiding talks altogether.

He can take his time flipping the switch, but he will have to flip it all the same.