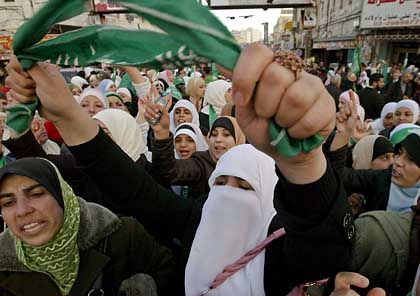 Will the victory of Hamas be a short-lived one?

The men came to Ramallah's central mosque in droves on Friday. They crammed the building to worship and even lined up outside beneath tarpaulins to pray. Two days after the Palestinian parliamentary elections brought a decisive victory to the militant Islamist Hamas movement, people here are slowly trying to make sense of the results.

Many have come here for guidance from the mosque's imam, who is employed by the Palestinian Authority, which remained firmly under the control of the Fatah Party until the election. Now he must find a difficult balancing act between the expectations of his parishioners, the old government and the next one that may be ruled by Hamas. On Wednesday, the militant organization, best known abroad for its attacks against Israeli civilians, won over Palestinians with its promise to clean up rampant corruption in the Fatah-ruled Palestinian Authority.

"Election day was a good one for the Palestinian people and for the entire Islamic community around the world," the imam said cautiously. Without any direct mention of Hamas, he said it was always a good thing when the pious accept their reponsibilities. "We have to get our house back in order," the preacher said. "We know need patience and wisdom. We have to stick together -- everyone, always and everywhere."

Across Ramallah on Friday, a new reality began to set in. As they came to pray, the men left behind hundreds of posters in the mosque of Hamas's founder, Sheikh Ahmed Yassin, who was killed by the Israelis in 2004. But for the most part, Hamas members were self-restrained on Friday. They were ill-prepared for Wednesday's victory and on Friday they found themselves struggling to make up for lost time.

Local-level Hamas leaders began meeting to make bigger plans for a party that until now has had no solid political platforms other than its pledge to battle corruption. Many Hamas politicians had hoped to form a coalition with the defeated Fatah, but that pairing is unpopular among broad swaths of the party founded by Yasser Arafat. If Hamas and Fatah are unable to join forces, Hamas's considerable weaknesses will quickly fall under the spotlight.

A party without leaders

The Islamist party is lacking in qualified personnel to run the government -- either in parliament or in the cabinet. Khaled Mashal, the movement's intellectual leader and chief ideologue, is living in exile in Damascus, Syria. Hamas sources said the movement is working furiously to try to persuade the European Union to apply pressure on the United States and Israel to allow Mashal to return to the Gaza Strip.

Even though Hamas -- a strange blend of terrorist outfit and social movement -- managed to organize a winning election campaign, it will now have tremendous difficultly putting together a pragmatic program to govern. In effect, it will have to rely on a communication network developed for an underground resistance movement.

But the group's problems are by no means limited to the lack of a functioning party infrastructure. In the run-up to the election, the Israeli Army jailed dozens of important Hamas cadres and placed them under administrative arrest for an indefinite period. Among them is Sheikh Hasan Yusuf, a leading Hamas thinker in the West Bank. Yusuf's detainment may even have helped him win votes, but his absence is now proving painful for the movement.

With so many Hamas leaders off the radar, the question of who could possibly be appointed to Abbas's cabinet remains completely open. If it succeeds in creating a coalition government, it is believed that Hamas will pursue the "feel-good" ministries, with portfolios like education or social welfare -- places where it could quickly apply its Islamic agenda without much resistance. Even before the Hamas victory, some independent candidates with ties to Hamas had been eyed as possible candidates for important government posts. Now Hamas could be in a position where it has to nominate a prime minister and foreign minister from within its own party -- politicians who would initially be seen as international pariahs by just about every government but Iran. Among the names currently being floated for a key post is that of Ismail Haniyeh, Hamas' leader in Gaza, who has served as the voice of the group since the election. But Haniyeh has been a low-key figure and little is known about how he might steer the party if it assumes power.

The coffers are empty

Even if Hamas manages to form a government, there are plenty of problems waiting to scupper things. In the next two weeks the wages for around 150,000 employees of the Palestinian Authorities will need to be paid. But as Fatah politicians clearly enjoy saying: the coffers are empty. In the past the international community has jumped in to fill the financial gap to ensure stability in the region. But with Hamas in charge that isn't likely to happen anymore.

It's also slowly dawning on the Islamists that if they try to govern alone they will have to take charge of the chaotic and Fatah-dominated Palestinian security apparatus. Will the police obey them? "We'll wait and see," a member of the "Special Police" unit casually said while patrolling in his jeep near Manara Square in the city center. In the Palestinian-controlled areas there are no civil servants sworn to serve the government. After the founding of the Palestinian Authority, they first swore their allegiance to Yasser Arafat and then later to Fatah.

When Hamas attempts to take command of these groups, problems could quickly emerge -- a reality that rattles the nerves of more than a few Hamas members. "The victory could have been a little less lopsided," muttered one Hamas activist, hinting at the need for cooperation with Fatah.

Naturally, there are also voters quite content with the election result.

Faris, a shopkeeper who sells menswear, said he supported Hamas because "under Fatah it was impossible to do normal bookkeeping." But those in the business community in Ramallah opposed to Hamas are already preparing for another scenario -- the speedy failure of the Islamists.

"Ninety percent of my business comes from foreign NGOs that send their personnel to Ramallah," said one 45-year-old businessman, who withheld his name out of fear of repercussions. "These people leave a lot of money here besides the direct aid that we get." He fears if those groups end their projects because of Hamas, "the country will soon be broke." Even though he backed a small left-wing group in the election he's pleased the Hamas victory was so massive that they will likely have to govern alone. After all, Hamas's overwhelming success could also become its own undoing.

"Six months, at most a year is what I give them," he said. "Then there will be new elections and the horror will be over."