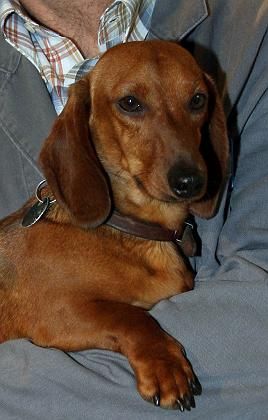 For centuries, the trusty Dachshund, disparagingly labelled 'sausage dog' in the Anglo-Saxon world, was a firm favorite among dog owners in canine-crazy Germany.

The short-legged, long-bodied dog, bred by hunters in the 15th century to pull foxes out of their holes, gradually became something of a national symbol, embodying certain Teutonic characteristics: reliable, obstinate, petit-bourgeois, nosey.

Kaiser Wilhelm II built a memorial to his faithful Dachshund "Erdmann", and the dog featured as "Waldi" the official mascot of the 1972 Munich Olympics.

They remain ubiquitous on German pavements and in cafes, usually trotting dutifully behind elderly ladies. But alarmed dog lovers have warned this week that the Dachshund population is shrinking, with just 7,300 puppies born last year, a quarter of the number born 25 years ago, according to the German Dog Federation. In the last 10 years alone, Dachshund births have plunged 40 percent.

In a further disturbing sign, a Dachshund race in Berlin had to be cancelled this year due to lack of interest.

Helmut-Jürgen Reinhardt, chairman of the National Dachshund Society in the Berlin district of Spandau, said dog lovers were increasingly opting for mongrels from eastern Europe because they couldn't afford pure-bred Dachshunds which can cost up to €500.

"I don't think the Dachshund will die out. We've still got people breeding them," Reinhardt told SPIEGEL ONLINE. "I hope we'll continue to see them in cafes and on street corners."

"I grew up with Dachshunds. They're very intelligent, very faithful and they're exceedingly good actors. When it's raining outside and they don't want to go walkies they pretend to be ill. And they're brave. My Dachshund takes on any dog regardless of how big he is and says 'I'm the boss!' They really are your best friend," said Reinhardt.

Dachshunds have been popular in other countries too. Queen Margrethe of Denmark appealed for help when her Dachshund "Zenobie" disappeared in 1993, and hundreds of her subjects came to her aid, scouring forests for days waving sausages, to no avail. Her husband Henrik, Prince Consort of Denmark is honorary president of the Danish Dachshund Club.

And the Japanese national football team brought one to Germany for the 2006 World Cup as a mascot. They called him Erwin Rommel, after the German World War II field marshal, who was also known as the "Desert Fox."