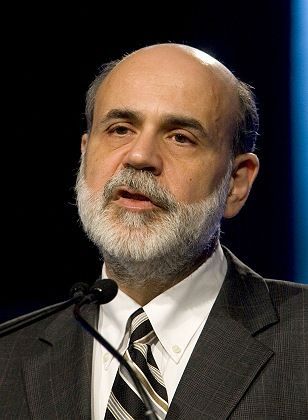 Ben Bernanke, chairman of the board of the US Federal Reserve bank

Four years ago, an academic economist named Ben Bernanke co-authored a technical paper that could have been titled Things the Federal Reserve Might Try if Its Desperate -- although that may not have been obvious from its actual title, Monetary Policy Alternatives at the Zero Bound: An Empirical Investigation.

Today, the Fed is indeed desperate, and Mr. Bernanke, as its chairman, is putting some of the papers suggestions into effect. Unfortunately, however, the Bernanke Feds actions -- even though theyre unprecedented in their scope -- probably wont be enough to halt the economys downward spiral.

And if Im right about that, theres another implication: the ugly economics of the financial crisis will soon create some ugly politics, too.

To understand whats going on, you have to know a bit about how monetary policy usually operates.

The Feds economic power rests on the fact that its the only institution with the right to add to the monetary base: pieces of green paper bearing portraits of dead presidents, plus deposits that private banks hold at the Fed and can convert into green paper at will.

When the Fed is worried about the state of the economy, it basically responds by printing more of that green paper, and using it to buy bonds from banks. The banks then use the green paper to make more loans, which causes businesses and households to spend more, and the economy expands.

This process can be almost magical in its effects: a committee in Washington gives some technical instructions to a trading desk in New York, and just like that, the economy creates millions of jobs.

But sometimes the magic doesnt work. And this is one of those times.

These days, its rare to get through a week without hearing about another financial disaster. Some of this is unavoidable: theres nothing Mr. Bernanke can or should do to prevent people who bet on ever-rising house prices from losing money. But the Fed is trying to contain the damage from the collapse of the housing bubble, keeping it from causing a deep recession or wrecking financial markets that had nothing to do with housing.

So Mr. Bernanke and his colleagues have been doing the usual thing: printing up green paper and using it to buy bonds. Unfortunately, the policy isnt having much effect on the things that matter. Interest rates on government bonds are down -- but financial chaos has made banks unwilling to take risks, and its getting harder, not easier, for businesses to borrow money.

As a result, the Feds attempt to avert a recession has almost certainly failed. And each new piece of economic data -- like the news that retail sales fell last month -- adds to fears that the recession will be both deep and long.

So now the Fed is following one of the options suggested in that 2004 paper, which was about things to do when conventional monetary policy isnt getting any traction. Instead of following its usual practice of buying only safe US government debt, the Fed announced this week that it would put $400 billion (€257 billion) -- almost half its available funds -- into other stuff, including bonds backed by, yes, home mortgages. The hope is that this will stabilize markets and end the panic.

Officially, the Fed wont be buying mortgage-backed securities outright: its only accepting them as collateral in return for loans. But its definitely taking on some mortgage risk. Is this, to some extent, a bailout for banks? Yes.

Still, thats not what has me worried. Im more concerned that despite the extraordinary scale of Mr. Bernankes action -- to my knowledge, no advanced-countrys central bank has ever exposed itself to this much market risk -- the Fed still wont manage to get a grip on the economy. You see, $400 billion sounds like a lot, but its still small compared with the problem.

Indeed, early returns from the credit markets have been disappointing. Indicators of financial stress like the TED spread (dont ask) are a little better than they were before the Feds announcement -- but not much, and things have by no means returned to normal.

What if this initiative fails? Im sure that Mr. Bernanke and his colleagues are frantically considering other actions that they can take, but theres only so much the Fed -- whose resources are limited, and whose mandate doesnt extend to rescuing the whole financial system -- can do when faced with what looks increasingly like one of historys great financial crises.

The next steps will be up to the politicians.

I used to think that the major issues facing the next president would be how to get out of Iraq and what to do about health care. At this point, however, I suspect that the biggest problem for the next administration will be figuring out which parts of the financial system to bail out, how to pay the cleanup bills and how to explain what its doing to an angry public.