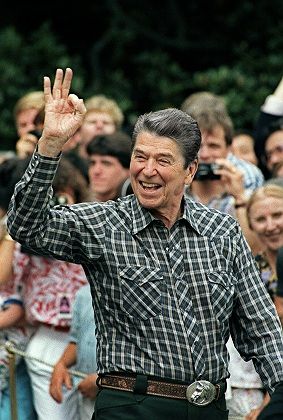 Historical narratives matter. Thats why conservatives are still writing books denouncing F.D.R. and the New Deal; they understand that the way Americans perceive bygone eras, even eras from the seemingly distant past, affects politics today.

And its also why the furor over Barack Obamas praise for Ronald Reagan is not, as some think, overblown. The fact is that how we talk about the Reagan era still matters immensely for American politics.

Bill Clinton knew that in 1991, when he began his presidential campaign. The Reagan-Bush years, he declared, have exalted private gain over public obligation, special interests over the common good, wealth and fame over work and family. The 1980s ushered in a Gilded Age of greed and selfishness, of irresponsibility and excess, and of neglect.

Contrast that with Mr. Obamas recent statement, in an interview with a Nevada newspaper, that Reagan offered a sense of dynamism and entrepreneurship that had been missing.

Maybe Mr. Obama was, as his supporters insist, simply praising Reagans political skills. (I think he was trying to curry favor with a conservative editorial board, which did in fact endorse him.) But where in his remarks was the clear declaration that Reaganomics failed?

For it did fail. The Reagan economy was a one-hit wonder. Yes, there was a boom in the mid-1980s, as the economy recovered from a severe recession. But while the rich got much richer, there was little sustained economic improvement for most Americans. By the late 1980s, middle-class incomes were barely higher than they had been a decade before -- and the poverty rate had actually risen.

When the inevitable recession arrived, people felt betrayed -- a sense of betrayal that Mr. Clinton was able to ride into the White House.

Given that reality, what was Mr. Obama talking about? Some good things did eventually happen to the US economy -- but not on Reagans watch.

For example, Im not sure what dynamism means, but if it means productivity growth, there wasnt any resurgence in the Reagan years. Eventually productivity did take off -- but even the Bush administrations own Council of Economic Advisers dates the beginning of that takeoff to 1995.

Similarly, if a sense of entrepreneurship means having confidence in the talents of American business leaders, that didnt happen in the 1980s, when all the business books seemed to have samurai warriors on their covers. Like productivity, American business prestige didnt stage a comeback until the mid-1990s, when the US began to reassert its technological and economic leadership.

I understand why conservatives want to rewrite history and pretend that these good things happened while a Republican was in office -- or claim, implausibly, that the 1981 Reagan tax cut somehow deserves credit for positive economic developments that didnt happen until 14 or more years had passed. (Does Richard Nixon get credit for Morning in America?)

But why would a self-proclaimed progressive say anything that lends credibility to this rewriting of history -- particularly right now, when Reaganomics has just failed all over again?

Like Ronald Reagan, President Bush began his term in office with big tax cuts for the rich and promises that the benefits would trickle down to the middle class. Like Reagan, he also began his term with an economic slump, then claimed that the recovery from that slump proved the success of his policies.

And like Reaganomics -- but more quickly -- Bushonomics has ended in grief. The public mood today is as grim as it was in 1992. Wages are lagging behind inflation. Employment growth in the Bush years has been pathetic compared with job creation in the Clinton era. Even if we dont have a formal recession -- and the odds now are that we will -- the optimism of the 1990s has evaporated.

This is, in short, a time when progressives ought to be driving home the idea that the rights ideas dont work, and never have.

Its not just a matter of what happens in the next election. Mr. Clinton won his elections, but -- as Mr. Obama correctly pointed out -- he didnt change Americas trajectory the way Reagan did. Why?

Well, Id say that the great failure of the Clinton administration -- more important even than its failure to achieve health care reform, though the two failures were closely related -- was the fact that it didnt change the narrative, a fact demonstrated by the way Republicans are still claiming to be the next Ronald Reagan.

Now progressives have been granted a second chance to argue that Reaganism is fundamentally wrong: once again, the vast majority of Americans think that the country is on the wrong track. But they wont be able to make that argument if their political leaders, whatever they meant to convey, seem to be saying that Reagan had it right.