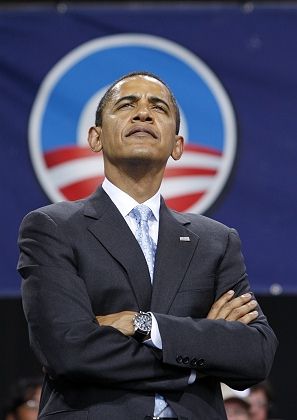 A sea change: Barack Obama would not have won the Democratic nomination 20 years ago.

Fervent supporters of Barack Obama like to say that putting him in the White House would transform America. With all due respect to the candidate, that gets it backward. Mr. Obama is an impressive speaker who has run a brilliant campaign -- but if he wins in November, it will be because our country has already been transformed.

Mr. Obamas nomination wouldnt have been possible 20 years ago. Its possible today only because racial division, which has driven US politics rightward for more than four decades, has lost much of its sting.

And the de-racialization of US politics has implications that go far beyond the possibility that were about to elect an African-American president. Without racial division, the conservative message -- which has long dominated the political scene -- loses most of its effectiveness.

Now, the truth is that the Bush administrations big-spending impulses have been largely limited to defense contractors. But more to the point, the McCain campaign is deluding itself if it thinks this issue will resonate with the public.

For Americans have never disliked Big Government in general. In fact, they love Social Security and Medicare, and strongly approve of Medicaid -- which means that the three big programs that dominate domestic spending have overwhelming public support.

If Ronald Reagan and other politicians succeeded, for a time, in convincing voters that government spending was bad, it was by suggesting that bureaucrats were taking away workers hard-earned money and giving it to you-know-who: the strapping young buck using food stamps to buy T-bone steaks, the welfare queen driving her Cadillac. Take away the racial element, and Americans like government spending just fine.

But why has racial division become so much less important in American politics?

Part of the credit surely goes to Bill Clinton, who ended welfare as we knew it. Im not saying that the end of Aid to Families With Dependent Children was an unalloyed good thing; it created a great deal of hardship. But the bums on welfare played a role in political discourse vastly disproportionate to the actual expense of A.F.D.C., and welfare reform took that issue off the table.

Another large factor has been the decline in urban violence.

As the historian Rick Perlstein documents in his terrific new book Nixonland, Americas hard right turn really began in 1966, when the Democrats suffered a severe setback in Congress -- and Ronald Reagan was elected governor of California.

The cause of that right turn, as Mr. Perlstein shows, was white fear of urban disorder -- and the associated fear that fair housing laws would let dangerous blacks move into white neighborhoods. Law and order became the rallying cry of right-wing politicians, above all Richard Nixon, who rode that fear right into the White House.

But during the Clinton years, for reasons nobody fully understands, the wave of urban violence receded, and with it the ability of politicians to exploit Americans fear.

Let me add one more hypothesis: although everyone makes fun of political correctness, Id argue that decades of pressure on public figures and the media have helped drive both overt and strongly implied racism out of our national discourse. For example, I dont think a politician today could get away with running the infamous 1988 Willie Horton ad.

Unfortunately, the campaign against misogyny hasnt been equally successful.

By the way, it was during the heyday of the baby boom generation that crude racism became unacceptable. Mr. Obama, who has been dismissive of the boomers psychodrama, might want to give the generation that brought about this change, fought for civil rights and protested the Vietnam War a bit more credit.

Anyway, none of this guarantees an Obama victory in November. Racial division has lost much of its sting, but not all: you can be sure that well be hearing a lot more about the Rev. Jeremiah Wright and all that. Moreover, despite Hillary Clintons gracious, eloquent concession speech, some of her supporters may yet refuse to support the Democratic nominee.

But if Mr. Obama does win, it will symbolize the great change that has taken place in America. Racial polarization used to be a dominating force in our politics -- but were now a different, and better, country.