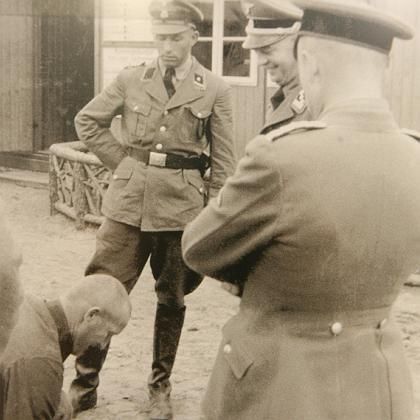 81-year-old Josias Kumpf is being deported from the US after his SS past came to light. This archive photo shows SS members and a prisoner at Sachsenhausen concentration camp near Berlin.

An 81-year-old Serbian-born man has been stripped of his US nationality and is to be deported to Germany after authorities discovered his past as a member of Hitler's SS.

Immigration judge Jennie Giambastiani on Wednesday ordered the deportation of Josias Kumpf, who lives in Racine, Wisconsin. Under the deportation order, Kumpf could choose to be deported to either Serbia, Austria or Germany. The US Justice Department announced Thursday that Kumpf had chosen Germany as his destination. Kumpf's lawyer said he would appeal the court ruling.

In July 2006, the departments of Justice and Homeland Security asked Giambastiani to deport Kumpf. The Justice Department's Office of Special Investigations, which investigates individuals who took part in Nazi crimes and who subsequently entered the US illegally, has pursued Kumpf's denaturalization since 2003.

Kumpf was stripped of his US citizenship in 2005 after a Winconsin federal judge concluded he had "personally assisted" in the persecution of prisoners and found that Kumpf had not disclosed his SS membership when he applied for a visa to the US. Kumpf did not mention his past in the SS -- which played an integral role in the Holocaust -- for fears he would be disqualified.

When his citizenship was revoked, Kumpf became the 100th Nazi criminal to be successfully prosecuted by the OSI since it was created in 1979.

He immigrated to the US from Austria in 1956 under a program intended to help postwar refuges in Europe, and was naturalized as a US citizen in 1964. He said he asked his wife not to mention his SS past because he was afraid he would be refused citizenship.

According to researchers, Kumpf served as a member of the elite SS Death's Head division which provided concentration camp guards. He served at the Trawniki training camp in Nazi-occupied Poland, Sachsenhausen concentration camp near Berlin, and slave-labor construction sites in German-occupied France, where prisoners built launch platforms for V-1 and V-2 missiles.

An appeals court affirmed the denaturalization decision in February 2006. That ruling quoted Kumpf's testimony in which he described his duties as a guard during a November 1943 massacre at the labor camp in Trawniki.

Kumpf said he watched people get shot and his orders called for him to shoot anyone who tried to escape. Some 8,000 people died during the massacre, one of the bloodiest single massacres during the Holocaust. The appeals court concluded Kumpf had assisted in persecution and was not eligible for a US visa or naturalization.

"Had Kumpf told the truth after the war, he never would have been permitted to enter this country," OSI Director Eli M. Rosenbaum said in a statement.

"This case reflects the Justice Department's commitment to the principle that those who helped the Nazi regime carry out its infamous genocidal designs are unfit to live in the United States," said Assistant US Attorney General Alice S. Fisher in a statement.

In a 2003 interview, Kumpf said he was taken from his home in Yugoslavia as a 17-year-old and forced to serve as a guard, but did not participate in any atrocities.

"We think the judge's interpretation of the law is in error," Kumpf's attorney Peter Rogers said Thursday. "We do not believe that 'assistance and persecution' would include a gentleman who was involuntarily (conscripted) into the army, assigned to the SS and then stationed at places where admittedly terrible things happened. My client never took part in them."

It is the second case of its kind in recent months. In September 2006, an 84-year-old German woman, Elfriede Lina Winkel, was deported to Germany from San Francisco after she admitted that she served as a guard at the Ravensbrück concentration camp during World War II.